KIM LAWTON: It was a massive party as some 1,200 Conservative Jews gathered to celebrate their movement’s 100th anniversary. The meeting was sponsored by the United Synagogue of Conservative Judaism, the umbrella group for the nation’s more than 630 Conservative congregations. From its beginning a century ago, the movement has taken a middle road between the more traditional Orthodox Judaism and the more liberal Reform movement. Rabbi Steven Wernick is head of United Synagogue.

LAWTON: In 1971, about 41 percent of American Jews were part of the Conservative movement. But, according to a new survey by the Pew Research Center, today, only 18 percent of US Jews identify with Conservative Judaism. Wernick believes that’s in part because of how well Jews have fared in American society. 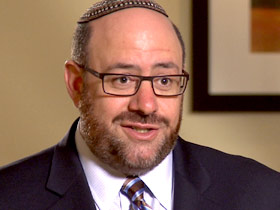 WERNICK: Jews in America, we have been wildly successful. And so the question becomes, why be Jewish? For the first time in Jewish history, where you have the opportunity to opt out, the question becomes, why opt in? And so for those religious movements that have been in the center, that take a more nuanced, more mosaic approach to religious life, making that argument has been harder.

LAWTON: United Synagogue has been studying ways to expand outreach. The group has been urging a new focus on building spiritual, caring communities, sometimes even outside synagogues.

WERNICK: It’s not about bricks and mortars, it’s about people and it’s about relationships. So we’re working with synagogues to re-imagine their vision and to think differently about how they build relationships.

LAWTON: The denomination is especially concerned about reaching out to younger Jews. The Pew study found that among American Jews between the ages of 18 and 29, just 11 percent identify as Conservative, compared with 29 percent for Reform Jews and 41 percent who say they have no formal affiliation at all. 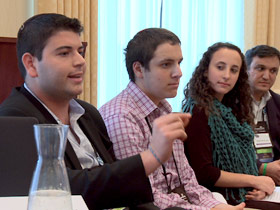 WERNICK: One of my teachers says it this way, is that we build the synagogue of our grandparents’ dreams and not the synagogue of our grandchildrens’ dreams. So not being affiliated for that age group is very often a rejection of the institutional structures of their parents and grandparents, but not necessarily the rejection of their Jewish identity.

LAWTON: Despite the challenges, Wernick insists he remains hopeful.

LAWTON: And a focus on renewal, he says, will sustain the Conservative movement for another hundred years and beyond. I’m Kim Lawton reporting.

A century after its founding, Conservative Judaism still represents a centrist approach to Jewish life, one that is both rooted in tradition and informed by modernity. But it faces challenges as membership declines and leaders look for ways to expand outreach, especially to younger Jews.

Judaism: A Way of Being