LUCKY SEVERSON, correspondent: This is a cross-gender cabaret in Chiang Mai, Thailand. Those employed here, the sex workers, are considered the lowest of the low. This is there spokesperson Nada.

NADA: You’re supposed to use the law to protect people. Not just to use the law to take advantage from people. Almost every night now it’s come back that transgender sex worker has to pay for the police, you just have to pay and they will protect you.

BRUCE LASKY: Anti-discrimination laws in Thailand are non-existent or very, very weak at best and those laws need to either be strengthened or developed in the first place.

SEVERSON: One way or the other, Bruce Lasky will do what he can to defend sex workers or anyone who can’t afford legal help. He’s a lawyer from New York who moved to Asia in 2000 with an extremely ambitious, some might say starry-eyed notion of helping the lowest of the low and anyone else who lacks access to justice. He calls his organization Bridges Across Borders Southeast Asia. 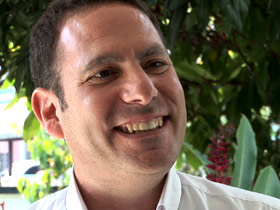 LASKY: I think I was pretty ignorant and that was a good thing. I didn’t realize the odds we were up against.

SEVERSON: Susan Brooks has worked with Lasky. She’s an associate dean at the Drexel Law School in Philadelphia.

SEVERSON: It’s understandable that there were skeptics when Lasky set out to expand the access to justice for the masses of Southeast Asia. This is a region where poverty is widespread, the rule of law is weak and human rights are only starting to get traction and lawyers generally represent only the powerful and the rich. So he has his work cut out for him.

SEVERSON: To begin with, he realized he needed to beef up human rights education and to teach Asian law students that they have a moral obligation to help the poor.

LASKY: Some of them will say, well, you’re Western, that’s a Western idea and we actually go back to their own ethics and religious teachings, we go back to Buddhism, we go back to Islam, we’ll go back to Hinduism, Christianity and we say that in all of your teachings is the idea of helping people and it doesn’t stop at your profession. 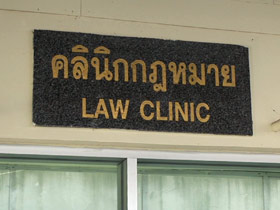 SEVERSON: Gradually he began to convince universities in the region to establish legal clinics where students get practical education working with the disadvantaged. Along with a handful of paid staffers, he recruits volunteers like retired lawyer from the U.S. Harrison Dickey.

HARRISON DICKEY: The idea is to have a pro bono legal clinic that students will man under the supervision of a dean and be backed up by law professors and they will get credit for that course and the students, the young people seem to like that a lot and their quite enthusiastic about it.

SEVERSON: At the University of Chiang Mai Law School, one of the most prestigious in Thailand, Professor Pan, director of the legal clinic, says Lasky’s work is making a difference among these young lawyers-to-be.

PROFESSOR PANARAIRAT SRICHAIYARAT: The benefit is that in the future we will have more lawyers who willing to do public service. I like them to have lawyer heart and lawyer head in a good way. Not a lawyer who pursue for money.

LASKY: We tell people go out, buy a nice house, raise a family, make money. We encourage people to make money, take care of your family, but give back and while you're doing that, and while you're making the money, do it ethically. 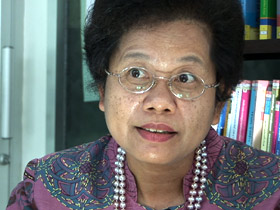 SEVERSON: And by ethically, he means if a law is unfair, you work to change it, you don’t go around it, which is often done in many Southeast Asian countries.

(to Lasky): You don’t use bribes, I mean you won’t give bribes to get something done?

LASKY: I will not.

SEVERSON: Lasky says he knew when he was a young man that he wanted to be a public service lawyer, a decision that may have been influenced by his father, a union organizer who Lasky thinks was murdered for his union ties.

LASKY: It isn’t so much what happened to my father as far as being assassinated, I think that the values that were there, about the values for people, the values for workers, for those that don’t have were passed on.

SEVERSON: It was an incident in law school that propelled Lasky to help those who can’t afford help. It was, he says, when a student called him a crude, anti-Semitic name. At first, he says he was angry and offended, and then realized that many others suffer much worse.

LASKY: You know, I’m a middle-class white male in the United States and I’m having these feelings, and I realized what about others, those that are in a lower socioeconomic position than I am, those who are ethnic minorities, those that have low levels of education, illiterate, what about them? How do they feel? 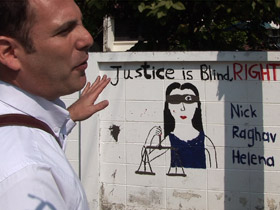 SEVERSON: The wall outside his office in Chiang Mai, Thailand is marked with paintings from law students who’ve come from throughout Asia to learn form Lasky.

There’s the ethical issue of society's responsibility to provide access to justice, it’s a fundamental right.

(talking to students): And then so we say why is there no law...

SEVERSON: It’s a right he peddles everywhere he goes and he’s always going.

SUSAN BROOKS: Every time I turn around he’s in a new country so he seems to be having an impact in what he’s doing and I think it’s a long-term investment.

SEVERSON: Lasky operates on a shoestring budget of about $500,000 a year. Most of his funding comes from small contributors.

On this day he’s in the Thai countryside with interns and volunteers at a place called the Wildfire Center run by Elizibeth Thaibinh from Arkansas. 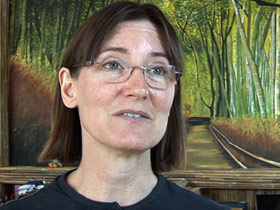 ELIZIBETH THAIBINH: And these women are from abused home situations, they’re from situations where they could really use legal counsel. So for them to come and give classes about what they’re rights are I think is very helpful for these women.

SEVERSON: Mila Xiong is one of the student interns. She knows what it’s like to be an immigrant.

MILA XIONG: A lot of it is very similar to issues that my parents faced, my grandparents faced, so yeah I’m quite aware, yeah, of these issues in the unprivileged societies here.

SEVERSON: Lasky is now connected with over 50 universities throughout Asia and has established legal clinics in a number of them.

(to Lasky): How many law students do you think you have worked with over the years?

LASKY: Thousands, absolutely thousands. And if you take that idea and you think about the power of one, it’s amazing.

SEVERSON: Recently he was invited to establish legal clinics in Myanmar. He’s also been asked to set up clinics in the Middle East.

Bruce Lasky, founder of Bridges Across Borders Southeast Asia, is setting up legal clinics and instilling in Asian law students the moral obligation to help the poor.