Movie clip: Mr. Northup? I have two gentlemen whose acquaintance you should make.

DEBORAH POTTER: 12 Years a Slave is based on the memoir of Solomon Northup, a free man from New York, who was kidnapped in 1841 and sold into slavery.

SOLOMON: My name is Solomon Northup, I'm a free man. And you have no right whatsoever to detain me.

POTTER: On one level, the film tells a story of bondage and brutality.

MASTER EPPS: Man does how he pleases with his property.

SOLOMON: My name is not Platt, my name... 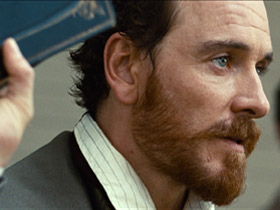 SLAVE TRADER: Your name is Platt!

POTTER: At a deeper level, 12 Years a Slave explores how religion and the Bible were used to justify slavery and cruelty.

POTTER: Even the "kindly" slave owner lives in moral ambiguity.

SOLOMON: My great thanks, Master Ford.

MASTER FORD: My thanks to you.

POTTER: ...willingly participating in a system that perpetuates evil. 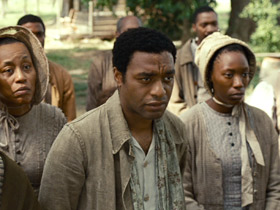 ELIZA: He is a slaver.

SOLOMON: Under the circumstances.

ELIZA: Under the circumstances, he is a slaver. Will you truckle at his boot? You luxuriate in his favor.

SOLOMON: I survive! I will not fall into despair. I will offer up my talents to Master Ford. I will keep myself hardy until freedom is opportune.

ELIZA: Ford is your opportunity? You do not think he does not know you are more than you suggest? But he does nothing for you. Nothing. You are no better than prized livestock. 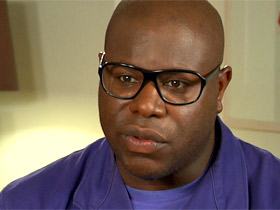 POTTER: The degradation and abuse Solomon and his fellow slaves suffer make the film difficult to watch at times, but for director Steve McQueen, that's precisely the point.

STEVE MCQUEEN (Director, 12 Years a Slave): You cannot divorce slavery from the physical, that's what it was about. It was about torture to a certain extent and also about mental torture, to keep people in line. There's no way you can sort of censor that from a film about slavery, otherwise there's no movie.

POTTER: Films focused on slavery are rare. Last year's Django Unchained may have opened the door with its violent—some said simplistic—tale of vengeance.

POTTER: 12 Years a Slave is more nuanced, exploring the complex relationship of the oppressor and the oppressed, and their relationships with God. Chiwetel Ejiofor plays Solomon. 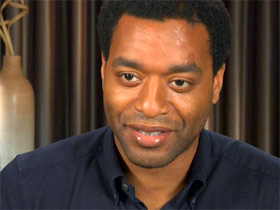 CHIWETEL EJIOFOR ("Solomon Northup"): He is somebody who is very active and alive in his spirit, in his soul and he is in that, completely sort of, unbreakable.

MCQUEEN: Solomon burst into song at a certain point because that was the only thing he could cling onto...is love and hope because if he doesn't he would lose his mind. I think this tells you how important religion was in keeping people sane.

PROF. PIERCE: They found within Christianity a place of catharsis, even a place of healing, because they were looking at the stories of say the Israelites, and that they had endured bondage, but that they had been freed, and translating those stories for them, for themselves, saying, “You know what, God hears me, God knows, God understands my system of bondage, God understands my state, and God will free me.”

POTTER: Slave owners, of course, relied on other Bible passages and interpretations. 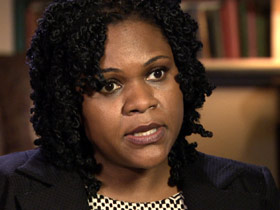 PROF. PIERCE: Religion was absolutely used to dehumanize. It was an insistence of the reality of the Curse of Ham which was that the descendants of Ham, which are Africans, were cursed to serve their brothers. Some went so far as to simply insist that the enslaved person was no better than an animal and he or she had no soul and that soul could not be enslaved.

SOLOMON: I want to ask you what part of the country you come from.

BASS: I originate from Canada. Now guess where that is.

SOLOMON: Oh I know where Canada is, I've been there myself.

BASS: Well-traveled for a slave.

POTTER: Solomon Northup regained his freedom with the help of abolitionist Samuel Bass.

MASTER EPPS: They ain't hired help. They are my property.

BASS: You say that with pride. 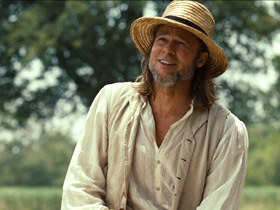 EPPS: I say that as fact.

BASS: If this conversation concerns what is factual and what is not, then it must be said that there is no justice, no righteousness in this slavery.

PROF. PIERCE: They’re using scriptures and the stories to make their claims of freedom and they’re doing it absolutely brilliantly.

POTTER: At the heart of the film is the experience of one man whose freedom was stolen and who never loses hope, a story the audience can relate to.

STEVE MCQUEEN: I want everyone to be in the shoes of Solomon. That's how I constructed the film. I wanted people to go on that journey with him.

POTTER: Some critics have questioned why it took a British director to bring this quintessentially American story to the screen.

STEVE MCQUEEN: My parents are from the West Indies, my mother and father were from Grenada. The only reason I'm here is because of the slave trade right now and my relationship with people in America is the same. So it's not about me being British, it's about me being a part of that global thing called the slave trade. 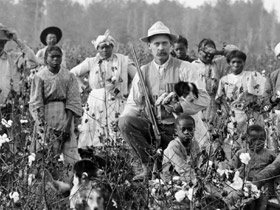 PROF. PIERCE: It’s a complicated and it’s a very ugly history, and so we don’t want to talk about it and we want to pretend that it was a very long time ago. When I simply want to suggest we’re still living with some of the repercussions of it.

POTTER: Fifty years the March on Washington for civil rights and 150 years after the abolition of slavery, the timing may be right for 12 Years a Slave to draw a wide audience and draw attention to the current state of race relations.

STEVE MCQUEEN: At the end of the day it's about remembering and never forgetting and understanding from the past and embracing your past in order to go forward into the future.

POTTER: That's a lot to hope for from a movie, but if it forces viewers to really see a history many would rather forget, 12 Years a Slave could stir the conversation. For Religion & Ethics NewsWeekly, I'm Deborah Potter in Washington.

A movie based on the true story of Solomon Northup, a free man who was kidnapped in 1841 and sold into slavery, portrays the complex relationships between slaves, slaveowners, abolitionists, and religion.