ELIAS CRUZ: I was just talking to her. She feels her case has been abandoned. They did not investigate as they should have to get concrete evidence. 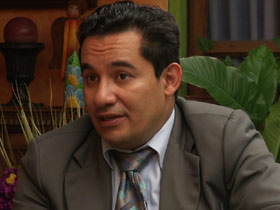 DENNIS MUNOZ ESTANLEY: Something that I’ve always told her is she is not alone in this case. Glenda has never been alone.

DR. JOSE FORTIN MAGANA: She is in prison because of an abortion. It’s absolutely false what she says. What happens is when someone murders someone else he or she doesn’t turn up on the TV and say, I’m guilty of murder. Maybe there has been a mistake but in most cases they are guilty.

DE SAM LAZARO: Glenda Cruz is one of several cases that have come under public scrutiny in the debate over one of the world’s most stringent abortion laws. Since 1997, abortion has been illegal in El Salvador with no exceptions, which had once existed for cases such as rape, incest, or threat to the mother’s life. Dozens of women have been prosecuted for illegal abortions, in some cases for aggravated homicide. The change reflects the strong influence in this largely Catholic nation of the group “Si ala Vida,” or “Yes to Life, and church leadership.

BISHOP MIGUEL MORAN AQUINO (Roman Catholic Bishop of San Miguel): We cannot accept any law that goes against life. Is not a question of faith and religion but of humanity. 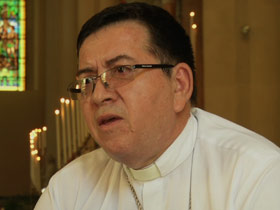 JORGE CRUZ (Obstetrician-Gynecologist): And in the public health system patients coming in with an abortion, whether self-provoked, septic, were told they had to report the patients for prosecution.

MAGANA: The statistics of the doctors in jail because of the crime of abortion is zero.

DE SAM LAZARO: In truly dire circumstances he says doctors can save a mother’s life. He points to the case last summer of a twenty-two- year-old woman whose case drew international attention.

DE SAM LAZARO: Known only as Beatriz, she was suffering from the immune disease lupus and from kidney failure. She was pregnant with a severely deformed fetus that could not survive outside the womb. El Salvador’s Supreme Court denied Beatriz’s petition for an abortion, a decision that drew widespread protests. The court upheld the recommendation of Dr. Fortin Magana’s office. 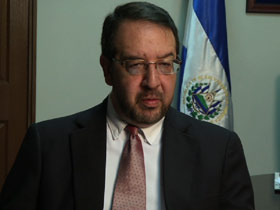 MAGANA: The department of legal medicine said Beatriz wasn’t at imminent risk, and we were right, because time went on and she continued with her pregnancy. It means what they said was a lie, because if it were true then Beatriz would have died. The baby was delivered. He lived for eight hours, and then he died.

DE SAM LAZARO: Beatriz’s baby was delivered by caesarian section, a process that in Fortin Magana’s view respected its right to life. But Beatriz’s doctors argued that the weeks-long ordeal harmed her health and caused needless suffering.

MIRNA DE RIVAS (Obstetrician-Gynecologist): Thank God there were no more complications [with Beatriz and she lived]. She was a very public case for everyone here, but there are many other patients that cannot be like her.

DE SAM LAZARO: As an example the obstetricians say they cannot intervene to preserve a woman’s health even if her pregnancy has no chance of coming to term.

CRUZ: The law does not permit us to terminate pregnancies that are unviable, such as ectopic pregnancies, as long as there is a fetal heart beat. Often there is a rupture and hemorrhage, and often women die from the shock.

DE SAM LAZARO: For some women whose pregnancies have ended in later stages, things have gotten even more complicated. About nine years ago, Cristina Quintanilla, 18 at the time, was close to term when she says she suffered a miscarriage.

CRISTINA QUINTANILLA: I sat on the toilet and I felt a strong pain. I tried to grab the door knob. I fell. Next thing I know I’m in the hospital.

DE SAM LAZARO: Quintanilla’s mother called the police, a common practice here because ambulances are unreliable—a call that she thinks was construed as a complaint.

CARMEN QUINTANILLA: It was very depressing when I realized what I did. We were scared that she could die. Then when I went to investigate, I found out that it was totally opposite. It was very prejudicial, because the authorities misinterpreted it 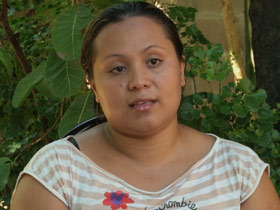 CRISTINA QUINTANILLA: I was dizzy because of the anesthesia and blood loss, and I saw a man wearing blue asking for my name. He said, you’re under arrest for the murder of your child.

DE SAM LAZARO: Quintanilla was sentenced to 30 years for aggravated homicide, even though she says the autopsy was ruled inconclusive. Her sentence was eventually commuted to time served—four hellish years, she says.

CRISTINA QUINTANILLA: I felt so terrible because the prosecutor would keep pointing at me and saying she killed her baby, she killed her baby. If you go to prison for an abortion, they beat you up, and so then they put you in isolation so you don’t even see the sun, and it’s not just me. There are other women in there.

ELIAS CRUZ BENEVIDES (Father of Glenda Cruz): I don’t believe she is capable of what they’ve accused her. She’s not violent; she was raised in a Christian family.

DE SAM LAZARO: Cruz says his daughter was a victim of domestic abuse, that her conviction was based on evidence from her estranged boyfriend. We tried without success to reach the prosecutors. Munoz Estanley has managed to free eight women jailed in abortion cases. He says the vast majority of those charged are poor, some illiterate, and face a legal system they don’t understand, which provides very poor legal services. He says women must think twice about seeking help in an obstetric emergency.

MUNOZ ESTANLEY: The women face the situation: do they just bleed to death, or do they go to jail? It's important to remember that before 1998, therapeutic abortions and abortions of deformed fetuses or for rape were allowed, and now it's not the same political climate.

DE SAM LAZARO: Bishop Aquino says the conservative tide is a direct reaction to international groups that have tried to impose liberal social legislation that’s counter to the culture and values here.

BISHOP AQUINO: They want to promote therapeutic abortion. This would open the window to other kinds of abortions, then same-sex marriage and adopting children by homosexuals or lesbians.

Strongly influenced by Catholic teachings, the country of El Salvador now forbids all abortions. Fred de Sam Lazaro reports from San Salvador on the consequences for many women when abortion is considered murder, regardless of the circumstances.