KIM LAWTON, correspondent: It’s a major theme in Christmas cards and carols...this is the season of peace. Really? How do Christians understand the idea of Christmas peace in a world that can seem anything but peaceful? According to the story in the gospel of Luke, angels announced the birth of Jesus to shepherds in a nearby field saying, “Glory to God in the highest, and on earth, peace, good will toward men.”

NANCY GUTHRIE, author and speaker: Many people want to make Christ’s coming about many different things, but we get a picture of it at the very beginning, on the night he was born, that he came for peace.

LAWTON: Nancy Guthrie is a speaker and author who edited a book about Christmas peace. She admits when many Christians look at the world, their communities and even their own lives, they struggle to figure out what the peace on earth message really means. 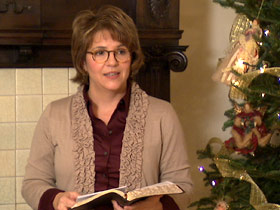 GUTHRIE: It’s been 2,000 years since Christ came and there is no peace in a sense. We know that there is plenty of war and plenty of conflict so if that’s the kind of peace that was being talked about in the angels’ announcement, something has gone very wrong.

LAWTON: Christians have long wrestled over the apparent disconnect. Reverend Martin Luther King, Jr., preached about it in 1967, in his last Christmas Eve sermon before he was killed.

REV. MARTIN LUTHER KING, JR.: (audio) This Christmas season finds us a rather bewildered human race. We neither have peace within nor peace without.

LAWTON: King went on to preach about the importance of tying “peace on earth” to the other part of the angels’ announcement, “good will to all.” That’s a view shared by Rev. Otis Moss III, senior pastor at Trinity United Church of Christ in Chicago. He says Jesus coming into the world brought a new ethic of caring for others. 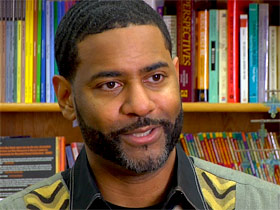 REV. OTIS MOSS III (Trinity United Church of Christ): Peace requires that we nurture each other, and we live in a very individualized society and here is the savior saying that you cannot close yourself off. You cannot live individualized. You have to live with this community ethic where you recognize that my freedom is connected to your freedom, that my blessings are connected to your blessings and that we are deeply interconnected.

LAWTON: Moss says the message of peace can be difficult in a community like his. Over the past year, Chicago has been wracked by economic uncertainty and gun violence, especially among young people. Moss and other religious leaders have been leading peace circles, which encourage intense dialogue between groups at odds with each other.

MOSS: When you start to get to the core of who a person is, all of a sudden all of the walls begin to crumble down and we realize that we see each other as brothers and as sisters, and we realize that there’s really not a great distance between us. And that’s what peace circles do.

LAWTON: Moss finds it significant that in the Christmas story, the angels’ peace announcement was given to shepherds. 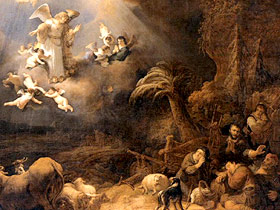 MOSS: Shepherds were the lowest of the low, but God says, “I want to speak to you.” And then makes this connection. We make it when we talk about the Lord is my shepherd. Soon as we take those who have been forgotten, and weave them into the fabric of humanity, we create the kind of shawl and blanket that brings us peace, because no one is cast aside, and that’s what God is demanding. That’s how peace comes about.

GUTHRIE: It doesn’t mean that we don’t have chaotic circumstances, that we’re not in the midst of a lot of opposition or difficulty, and yet when we know that there’s peace between us and God, then we can live lives of peace, that sense of being at rest, that all is right between us and our maker.

LAWTON: For Guthrie and her husband David, the Christmas season is a poignant reminder that finding spiritual peace isn’t always easy. As they hang the family stockings, there’s one for their oldest son Matt, who’s away at college, as well as stockings for their daughter Hope and son Gabriel, who have both died. Hope was born in 1998 with a rare metabolic disorder called Zellweger Syndrome. Hope lived just over six months. Knowing they carried the risk for the disease, David underwent a vasectomy. 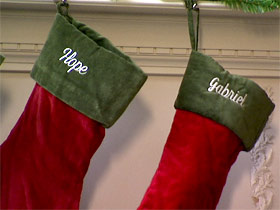 GUTHRIE: Evidently it didn’t work. And about a year and a half after our daughter Hope died, I gave birth to a son named Gabriel. And Gabriel, too, was with us just a short six months, like his sister Hope.

LAWTON: Losing two children to the extremely rare condition sent Guthrie on a spiritual search. She says she ultimately found comfort and peace by embracing what Christians say happened at Christmas, that God came to earth as a human being. She and her husband now lead retreats for other grieving families.

GUTHRIE: The good news of Christmas is that God hasn’t left us on our own in this dark and difficult world. We experience peace, very real peace, now, as the god who became flesh dwells with us even among us.

LAWTON: In his 1967 Christmas Eve sermon, King said despite the fact that sorrow and hardship and violence continue, Christians must hold on to the belief that peace will ultimately prevail.

KING: (audio) With this faith, we will be able to speed up the day when there will be peace on earth and good will toward men. It will be a glorious day.

LAWTON: In the meantime, Moss says he urges people to continue working for peace and watching for how it may already be happening.

MOSS: For me it’s been looking at this idea of God breaking in, the crazy, daring plan that God had to spend time with humanity. Every day a new story is born. Every night a new story is edited. So it’s an opportunity to really see the Christmas story from a completely different vantage point every day.

LAWTON: Peace can arrive in unexpected ways and in difficult places, he says, which is what the Christmas story is all about. I’m Kim Lawton.

According to the Christmas story in the Bible, angels proclaimed “peace on earth” when they announced the birth of Jesus. In 1967, in a Christmas Eve sermon, Rev. Martin Luther King Jr. said that “we neither have peace within nor peace without.” How do contemporary Christians understand Christmas as a season of peace in today’s often chaotic world? Managing editor Kim Lawton talks with evangelical teacher and writer Nancy Guthrie in Nashville and with UCC pastor Otis Moss III in Chicago about what peace on earth means to them and what it requires of twenty-first-century Christian communities.