SIMON SCHAMA (“The Story of the Jews”): This is a Jew, and so is this. This is a Jew, and this, and this, and so am I. So what, if anything, do we have in common? Not the color of our skin. Not the languages we speak, the tunes we sing, the food we eat. Not our opinions. We are a fiercely argumentative lot. Not even the way we pray, assuming we do. What ties us together is a story, a story kept in our heads and hearts. A story of suffering and resilience.

Jews never really think it's an obligation to build gorgeous ornaments, gorgeous buildings, because you always know you're going to have to leave them behind. You're going to have to reach for the suitcase sooner or later. So this whole place feels as though it reconciles the idea of refuge with beauty, and if you can bring that off just for a little moment in the hard lives of Jewish history, you have performed a mitzvah. 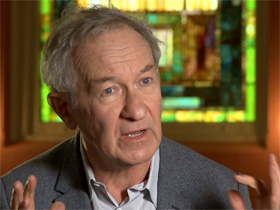 (Interview with R&E): The sense of the religion as a social performance, by which I mean Friday night with the candles, the blessing over the bread, all these things which are socially nourishing moments. They kind of glue Jews together in this kind of community of often happy ceremonial practice. Even if you don't believe the literal truth of every last jot and tittle of the Bible itself, and that's my story and the story of countless other Jews who don't necessarily believe that Jonah really had his long weekend with the fish, but you do in a sense join a community of observance very often, a lot, and you know that's true probably for the majority of Jews historically forever.

There was a Christian fear that because Christianity's separation from Judaism had not been fully established, backsliding was possible. Very, very early on, it is seen as dangerous, and stories of Jews abducting Christian children starts very early. One of the most poisonous legacies of John Chrysostom is he talks about synagogues as places of demons, and he doesn't mean it metaphorically.

(“The Story of the Jews”): With no accusation of Christ-killing to contend with, Jews under Islam were spared the demonization they suffered in Christendom. According to later Islamic sources, there seems to have been an early moment when Jews and Muslims might both have been part of the Umma, the common community of believers. 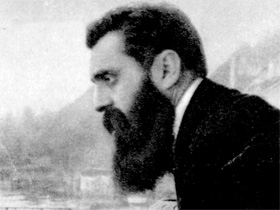 As a boy, young Theodor Herzl had been taught to believe the axiom of the Jewish Enlightenment that a wholehearted commitment to secular society would sweep away all the old prejudices.

(Interview with R&E): It not only was not happening, but the more the successful they were, the more Jews were demonized in the modern world. And Herzl was incredibly prescient; he was incredibly prescient about some absolutely hideous calamity happening around the corner. He couldn't foresee the smoke at the crematoria, but he knew you had to look at the Russian pogroms; he knew that something horrible was going to happen and that no one was going to come to the rescue of the Jews. They were going to be abandoned.

(“The Story of the Jews”): The problem of the Jews was that they were a nation without a home. So in 1895, he wrote his little book, a booklet really, called Der Judenstaat, ‘The Jewish State.’ And this is what he said in it: "We have sincerely tried everywhere to merge with the nations in which we live seeking just to preserve the faith, the religion of our fathers, but this has not been allowed to us.”

(Interview with R&E): In that sense of Zion being a necessary place of safety, that happened to be the place where Jewish identity was made, I'm absolutely, unapologetically a Zionist. I've always been a two-state Zionist. Always.

(“The Story of the Jews”): We told our story to survive. We are our story.

In a five-part series beginning on PBS stations next week, noted historian Simon Schama explores 3,000 years of Jewish history.  What sustained Jews through anti-Semitism and persecution? In the TV series and in a companion book also entitled “The Story of the Jews” Schama says, “The problem of the Jews was that they were a nation without a home.”