KIM LAWTON, correspondent: In this Orthodox synagogue in New York City, congregants are fulfilling the traditional Purim requirement that Jews hear the biblical Book of Esther, known as the Megillah, read aloud.

LAWTON: The center sanctuary is usually reserved for men, but on this day all of the listeners—and readers—are women. 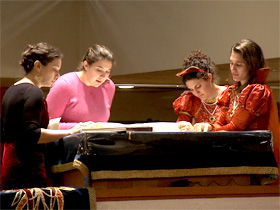 ADINA GERVER (Washington Heights Congregation): There aren’t that many opportunities for women to read in front of a group of other people, from a scroll. That’s sort of mostly reserved for men, for the most part, in the Orthodox community.

RABBI BENJAMIN ELTON, PhD: Well, in all Jewish rituals men have tended to take a greater role. Men are obliged in certain commandments which women are not obliged in, and therefore they carry them out.

LAWTON: For Purim, traditionally that has meant women listen as one man reads the story of Esther to the entire congregation of both men and women.

RABBI ELTON: In the last couple of generations, we’ve seen a great increase in Jewish learning amongst women. Women have said, “Well, we are also obliged in the commandment. We can take a leading role.”

LAWTON: To encourage that, the Jewish Orthodox Feminist Alliance has launched Project Esther,  an online resource which includes an international directory of women’s readings and celebrations. It also features an app that can be downloaded to help women learn how to chant the Megillah themselves or follow along as they listen to others. 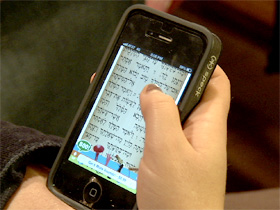 DEVORAH WOLF (Women’s Purim Organizer): You can turn on and off the punctuation marks that tell you the notes of how to read, and then you can try practicing without it, because the actual scroll has no markings at all.

LAWTON: For the last several years, this group of Orthodox women has been holding their Purim celebrations in often cramped private apartments, so they welcomed the synagogue’s invitation to hold their annual reading here. The Book of Esther recounts the story of how a plot to destroy the Jewish people is foiled in ancient Persia, thanks to the heroics of women. The story is set in motion when the king has his first wife, Vashti, banished and likely put to death after she refuses to appear at his drunken feast.

WOLF: Vashti definitely has an appeal as a character because she refuses what the king wants, and so I think that resonates with a lot of people.

LAWTON: The king holds a beauty contest and selects Esther to succeed Vashti as queen. But Esther’s uncle, Mordechai, tells her she must keep her Jewish identity hidden.

SARA HINDIN (Women’s Purim Organizer): In the beginning, Esther is kind of a passive character, and she goes along with all that’s happening and what other people tell her to do. But at some point she becomes more active, and some people say she takes on a little bit of the similar characteristic to that of Vashti, which is kind of taking a stance and saying what she wants and she believes needs to happen. 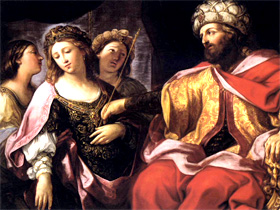 LAWTON: When the king’s close advisor devises a plot to annihilate the Jews, Esther must approach the king to plead for the salvation of her people.

RABBI ELTON: Esther rises to the opportunity that God gives her. She goes into the king’s inner chamber; she doesn’t know whether she’ll be put to death. The law in Persia was if you went in to see the king, and you weren’t invited, then you would be put to death unless he extended his golden scepter towards you to indicate he wanted to hear you, and save your life. And when she walked in she didn’t know whether she would live or die, and she took that great risk for her people.

LAWTON: The villain of the story is Haman, a descendant of the Amalek tribe who were traditional enemies of the Jews and sought their destruction.

RABBI ELTON: He symbolizes all anti-Semitism over all time. When Haman's name is mentioned, we all make noise in order to blot out his name.

LAWTON: In the story, Esther is welcomed by the king and Haman’s plot fails. The Jewish people are saved, and their enemies are killed instead. 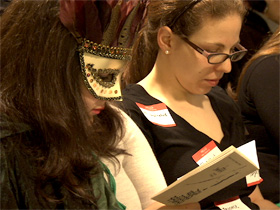 ELTON: Purim is really a story about turn-around, about the unexpected happening, and the dressing up is an indication of how things are not what they seem.

LAWTON: Elton says the dressing up in costume is also a hint about the hidden nature of God.

RABBI ELTON: The name of God never appears in the Book of Esther. But the story of the Book of Esther is really that God is always behind the story. God is hidden behind the text of the Megillah, and we hide ourselves behind masks and costumes on Purim. It’s a story of salvation from physical destruction, so we celebrate it in a physical way.

GERVER: It’s a great story, just from a purely literary perspective, and at its center is a woman, and that’s pretty unusual.

WOLF: Her character, over the course of the story, goes from very passive to very active, so it’s a nice way to celebrate that by doing something really proactive in the community.

LAWTON: And part of that means fulfilling one of the other commandments of Purim: giving donations to the poor, traditionally given so that others who are less fortunate can join in the celebration as well.

The Jewish celebration of Purim features reading aloud the complex and heroic account in the Book of Esther of Esther’s willingness to risk her life to save ancient Jews from annihilation by the King of Persia. Traditionally, among Orthodox Jews, the story was read aloud by men, but now Orthodox women are leading Purim services, too.