HILLARY CHAPMAN (Bahá’í Educator): The Bahá’í faith begins with two prophetic figures in 19th century Persia. The Báb was a merchant by trade, and came to assert that he was the fulfillment of Islam, and that he had come to pave the way for a second divine revelation that would follow soon after him. And we believe that Bahá'u'lláh was that second revealer. The terminology we use in the Bahá’í faith is “to make God manifest.” So God chooses someone, in some mysterious fashion, to exemplify his teachings.

The Báb’s message resonated very powerfully in Persia -- to love those who hate you, to forgive people, to be loyal, to be obedient, to be worthy of trust. Thousands of people became his followers. But there could be no other revealer other than Muhammad. And this is why it’s heretical in all Muslim countries. 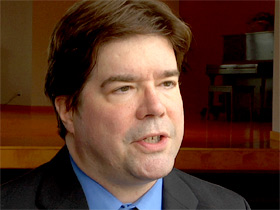 The Martyrdom of the Báb commemorates the day when the Báb was finally taken before a firing squad in the northern Persian city of Tabriz. It’s a Martyrdom, so…not a celebration, but a commemoration. But the use of the arts is very much encouraged as a way of kind of portraying the inner meaning of that day, as opposed to simply through the spoken word.

According to the witnesses, the shots were fired. The Báb had disappeared from view. They found him, much later, and a second regiment was brought in. And he was executed. His followers – who were known as Bábis, followers of the Báb – kept the body in hiding because otherwise it would have been completely desecrated. And it began a long journey, until it was finally interred in Mount Carmel in Israel, where today is the point of pilgrimage. And if you go to the Bahá’í World Center that’s where it is, where the tomb of the Báb is.

There are prayers in the Bahá’í scripture called Tablets of Visitation.

And they have to do with the passing of an important figure. So it is read every commemoration of the Martyrdom of the Báb. And also when Bahá’ís go on pilgrimage and they visit tombs, they would say those Tablets of Visitation. The standing is out of respect. In the Bahá’í faith, you pray towards Israel – towards Haifa, in Israel, where the holy shrines are.

On July 9, Baha’is observe the Martyrdom of the Bab, which marks the 1850 execution in Persia of one of the founders of their faith. It is one of nine holy days during which Baha’is suspend work and school. We visited a commemoration program at the Northern Virginia Baha’i Center, guided by Baha’i Educator Hillary Chapman.