FRED DE SAM LAZARO, correspondent: They've been front and center in the fight against Ebola, but picture any humanitarian crisis in recent memory. Chances are the men and women in white t-shirts and the hallmark red logo are in the picture. The images likes these, from the Syrian conflict often taken with their own cameras. MSF—Medicins Sans Frontieres—is in 70 countries today, bringing aid to victims of war, natural disasters, and epidemics. To the rest of the world the group, also called Doctors Without Borders, brings a sophisticated publicity campaign, sometimes with a bully pulpit. Its president, Dr. Joanne Liu, for example, spoke on Ebola at the United Nations in early August.

DE SAM LAZARO: Her group has a two-fold mission: medical care and, as they put it, bearing witness: to speak out when people are denied human rights, including medical care. It goes back to MSF’s founding in 1971 by a group of French Red Cross volunteers working amid grave violence in Nigeria’s civil war. Sociologist Renee Fox writes of their anguish in a book about MSF. 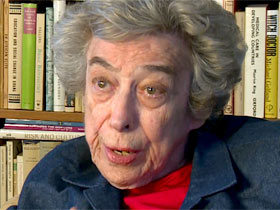 PROFESSOR RENEE FOX (University of Pennsylvania): They pledged their commitment to not speak of what they saw in the field, very much in keeping with the professional confidentiality that physicians keep vis-à-vis their individual patients. And when they saw these abuses taking place, this young small group of French physicians and medical journalists came together with the conviction that there was something wrong with not speaking out. And Doctors Without Borders, Médecins Sans Frontières, was born out of that.

DE SAM LAZARO: Four decades later it has evolved into a highly decentralized, self-described movement. It has chapters in 24 mostly wealthy countries, and some 25,000 people deployed around the world. Ninety percent are hired locally. And contrary to the name, the majority are not doctors and nurses. They are construction and maintenance workers, experts in logistics in water and sanitation if needed. The teams move swiftly into disaster zones, as we saw in this 2008 report from the hurricane-ravaged Haitian city of Gonaives:

De Sam Lazaro (2008): This warehouse was spared by the hurricanes, and it is quickly being converted into an 80-bed hospital. The construction workers aren’t finished yet, but the hospital work is already in full swing since it’s the only hospital in Gonaives, a city of more than 200,000 people.

DE SAM LAZARO: One reason it can move quickly is the group's prolific fundraising, globally 1.3 billion dollars a year. Critically, it has few strings attached.

SOPHIE DELAUNAY (Executive Director, MSF USA): We don’t need to wait for funding from a government to be able to react to a crisis.

DE SAM LAZARO: MSF’s Sophie Delaunay adds they don’t accept money from governments with a stake in or heavy influence over events. 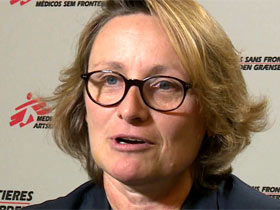 BENJAMIN LEVY, M.D.: It is almost like relearning medicine.

DE SAM LAZARO: We met Levy in a field hospital in Ethiopia near its border with Somalia, from where tens of thousands of refugees were fleeing famine and civil war.

LEVY: It was something that I had wanted to do for a long time, a place where sort of the idealism of medicine came to practice, and I think that was always a beacon to me as a place where I could do my training, learn my craft, and then go and use it in a way that made me feel like it had all meant something.

DE SAM LAZARO: Levy, who now works for the Centers for Disease Control and Prevention in Atlanta, remembers a culture of debate.

LEVY: I was able to voice my concerns and my opinions when it came to our medical activities. There was healthy debate as to what diseases we could treat, what diseases we didn’t have the capacity to treat, and where to take the programs that we were running as the emergency ended.

DE SAM LAZARO: MSF says such openness encourages innovation. For example, until the early 2000s malnutrition was treated in hospitals, which took weeks. MSF field workers urged a switch to a fortified peanut butter that had showed early promise. It’s now the standard for most malnourished children—cheaper, portable, and given at home.

DELAUNAY: It always comes from the tenacity, the determination of some individuals who are not satisfied with the status quo. 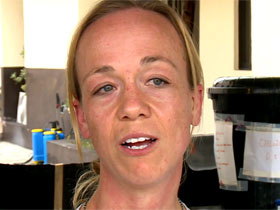 DE SAM LAZARO: Megan Klinger, a 34-year-old nurse from Montana, works in an Ebola care facility in Nigeria. She says that respect from local people is a key reason she chose MSF over other nongovernment organizations.

KLINGLER: I’ve been to countries that don’t allow that many ngos, but MSF is usually always one of the ones that is allowed through. They’re very well known.

DE SAM LAZARO: Getting well-known is a key security strategy MSF uses in war zones, where it works in advance to gain acceptance and assurances from all sides of the conflict.

DELAUNAY: You’re going to treat their brothers, their cousin, their family, etc, it’s a very good protection, actually. The second criteria that we use is we want to be able to have an evacuation route. The third criteria is are we able to put in place the best possible security measures, or safety measure in the case of Ebola?

KLINGLER: I was in Abkhazia, which is a breakaway republic in Georgia. I was there during the 2008 conflict. During the conflict I know my mom was very concerned and called all the state congressmen to try to get me evacuated out. But I actually—the embassy called, and I said I feel better here with MSF than you guys evacuating me out at this point. I felt very secure with the evacuation plan we had if needed, and I chose to stay.

DE SAM LAZARO: MSF did evacuate out of Somalia, following the months-long kidnapping of two staff members. The group closed a hospital earlier this year in Syria after five staffers were kidnapped. There are no MSF facilities currently in areas controlled by the group that calls itself Islamic State. In other places like Burma, Sri Lanka, and Yemen MSF decided to stay on, agreeing to not criticize government policies it acknowledged were repressive.

The mission of bearing witness has had to be tempered by real-life considerations, says author Fox.

FOX: Would witnessing do harm to the people they want to help? What about the many people indigenous to the country who are working with them? When they were young, they thought witnessing was an unmitigated virtue. As they matured they came to see how complex the ramifications of witnessing might be.

Fred de Sam Lazaro reports on this pioneering Nobel-Prize-winning humanitarian group whose mission is “medical care and bearing witness.” But since its inception in 1971, the mission of bearing witness has had to be tempered by real-life considerations, observes medical sociologist Renee Fox, author of a recent book on the organization. “When they were young, they thought witnessing was an unmitigated virtue. As they matured they came to see how complex the ramifications of witnessing might be.”