TIM O’BRIEN, correspondent: It was a burglary and stabbing at this trailer in the wee hours of a May morning five years ago that led to Tuesday’s (October 7) important Supreme Court case. The perpetrator: 33-year-old Gregory Holt. The victim: his ex-girlfriend. He slashed her throat and stabbed her in the chest, telling her, “If I can’t have you, no one will.”

She survived, but Holt was sentenced to life in prison after jurors learned of his long criminal history, including written threats to kidnap President Bush’s daughters and blow up federal buildings. He’s being held at this maximum security prison at Grady, Arkansas, about 70 miles southeast of Little Rock.

Years before the offense, Holt converted to Islam. He now goes by the name of Abdul Maalik Muhammad. He’s challenging prison regulations that prohibit facial hair, saying a half-inch beard is a requirement of his Muslim faith. And to many Muslims wishing to emulate the Prophet Muhammad, it is. 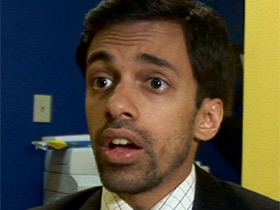 SAIF INAM (Muslim Public Affairs Council): There are narrations of the Prophet saying “grow out your beard,” and a lot of people interpret that as an imperative statement, which you have to do, and there’s no room for your own judgment on that.

O’BRIEN: Criminals do give up many of their rights when they enter prison, but not all of them. In fact, in 2000 President Clinton signed legislation that prohibits any restrictions on the religious liberty of prison inmates unless the restriction can be shown to be “in furtherance of a compelling governmental interest” and that it is “the least restrictive means of furthering that interest.” Security is a compelling interest in any prison. But how far does that go? Corrections officials here cite security as one of the principle reasons they ban facial hair. You can hide things in a beard, and they have neither the time nor the personnel to check every inmate’s beard to see how long it might be or what might be in it.

After two lower courts ruled against him, Holt—or Abdul Muhammad—mailed a 15-page handwritten petition to the U.S. Supreme Court, challenging the Arkansas prison grooming policy as a violation of that 2000 federal law.

“This is a matter of grave importance,” wrote Holt, “pitting the rights of Muslim inmates against a system that is hostile to these views.” When, to the surprise of many, the Court announced last March that it would hear Holt’s appeal, the case took on a life of its own.

The Becket Fund for Religious Liberty, a public interest law firm devoted to promoting religious freedom, got involved. It lined up attorney Douglas Laycock, an experienced Supreme Court advocate and one of the country’s leading authorities on church-state issues, to represent Holt in the High Court. As for prison officials’ security concerns: 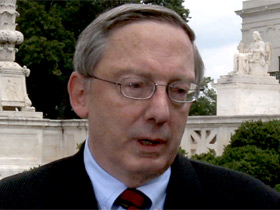 DOUGLAS LAYCOCK (Attorney for Gregory Holt): A half-inch beard is less than the diameter of a dime. Those are in fact pretty silly concerns, and in fact 43 other states, the feds, and D.C. would all allow this beard, and most of them would allow a much longer beard. Anything that is so tiny that conceivably can be hidden in this beard could be hidden much more easily in a shoe, a pocket.

O’BRIEN: Some may find his religious claims curious given that his crime—he slashed his girlfriend’s throat, stabbed her in the chest…

O’BRIEN: Historically, those who have forced the Supreme Court to define the limits of government power—like Gregory Holt—have not been pillars of the community. The Court used the case of Earl Gideon, a drifter with a long criminal record, to announce a fundamental right to a lawyer in all criminal cases, at state expense if necessary—and the case of Ernesto Miranda, a serial rapist, to require police inform suspects of those rights, along with the right to remain silent.

Attorneys for the state of Arkansas declined our request for an interview, as did corrections officials. Nor would they allow us any access to the inmate, Gregory Holt. Holt’s case has generated considerable support from groups that have long been at war on church-state issues. More than a dozen friend of the Court briefs, representing nearly a hundred organizations, have been filed in Holt’s behalf—but only one in support of Arkansas, filed on behalf of fifteen state, saying courts should defer to corrections officials on such matters.

After his arrest and incarceration, Holt continued to write threatening letters from prison. “Death to America,” he wrote in one letter, describing himself as an “American Taliban” in another.

But Obama’s Justice Department is also backing this self-proclaimed jihadist in this case, characterizing the prison’s security concerns as “exaggerated or based on mere speculation.” Byron Johnson heads the Institute for Studies of Religion at Baylor University. His 30 years of research has persuaded him that prisons may have a more compelling interest in promoting religion than in restricting it.

PROFESSOR BYRON JOHNSON (Founding Director, Baylor Institute for Studies of Religion): You begin to find that the more people participate in faith, the more they are mentored—you begin to see effects: better behavior, fewer infractions or misconduct while they are in prison. They adjust better, and guess what? They are less likely to be rearrested when they get out of prison.

O’BRIEN: Johnson adds that it’s actually practicing a faith that becomes statistically relevant, not just praying or reading the Bible.

This is the first Supreme Court test of the federal law designed to protect the religious freedom of prison inmates, and it raises an important question: If the law does not protect the right of a prison inmate to grow a beard, against claims of prison security—claims dismissed by so many as so weak—what does it protect?

Should an American Muslim convict have the religious freedom to grow a beard? The US Supreme Court will hear arguments in Holt v Hobbs on Tuesday, October 7. This is the first High Court test of the federal law designed to protect the religious freedom of prison inmates. Correspondent Tim O’Brien reports from the state penitentiary in Grady, Arkansas.