Fred de Sam Lazaro's reporting is a partnership with the Pulitzer Center on Crisis Reporting and Face to Face Media.

FRED DE SAM LAZARO, correspondent: On the 20th floor of a Beijing high rise, one of China's senior environmental reporters is becoming a Buddhist. Liu Jiangiang is an investigative journalist. His first story about the environment was an expose about illegal dam construction on the upper Yangtze River. It made national headlines. His hard-hitting stories eventually got him fired, so he continued his work at China Dialogue, an international online journal. After 10 years of reporting, he says he was feeling burned out.

LIU JIANGIANG: Every day what we do are good deeds, which may give us positive energy, but meanwhile what we are facing is the darkest side of the world. As an environmentalist, every day what we see is polluted air, polluted rivers, and the slaughter of wild animals. This kind of negative energy attacks us every day. Where do we draw our strength from?

DE SAM LAZARO: Liiu Jianqiang is one of millions of Chinese who are returning to Buddhist, Daoist, and Confucian temples that have at times in the past been condemned by the government Forty-five years ago, during China’s Cultural Revolution, many Buddhist temples like this one in central Beijing were defaced or destroyed. But today these temples are alive with worshippers. According to some surveys, nearly 1 in 5 Chinese—that’s more than 240 million—are Buddhists. Some scholars say this search for faith is linked to China's massive environmental problems. 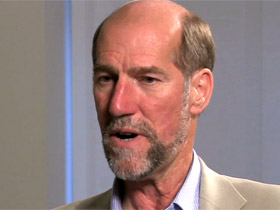 MARTIN PALMER (Alliance of Religions and Conservation): In a world in which capitalism and socialism and consumerism have created a kind of industrial behemoth that is just thundering ahead, that is draining life out of the villages. That is polluting the soil and the water and the air, you have a heartless world.

DE SAM LAZARO: Martin Palmer is based in the UK but has been working in China for nearly 20 years urging religious groups to respond to this crisis and to encourage conservation. In 2006, he realized this message was also being heard by the Communist Party.

PALMER: I was called in for a meeting in 2006 with the minister for the environment and the minister for religion, and they were very frank. They said the single-child policy has created the most selfish generation in China's history, because each child has been brought up as the center of attention for the family. Nothing is too much to give to them. And these two Communist Party officials said we want the religions to help us bring compassion back.

DE SAM LAZARO: But what is it that finally persuades an individual like Liu Jianqiang to cross the gap from atheism to Buddhism, in his case the smaller Tibetan branch, which has about 5 million adherents?

Shi Lihong is a journalist and filmmaker. She's known Liu for more than 10 years, but she was still surprised by his decision.

SHI LIHONG: When I heard that Jianqiang was converted I was really shocked. You know, our generation was raised as atheists through childhood. We were taught that religious beliefs are superstitious. So it’s very hard for me to believe in any religion. I feel there is a huge gap. I was very curious. I want to know what has made him cross that gap. So I start to think of my other friends who were converted to Buddhism.

DE SAM LAZARO: To satisfy her curiosity, Shi took a film crew to the highlands of western China, an area adjoining the autonomous region more commonly known outside China as Tibet. It’s rich in biodiversity that conservation groups say is greatly imperiled. This is also home to the headwaters of the Yellow and Yangtze Rivers, quite literally a life-line to hundreds of millions of people downstream. A prominent person in her documentary is Tashi Sange. He explains how conservation and respect for all living things has long been an intrinsic part of life here. 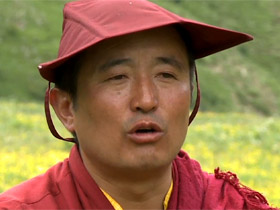 TASHI SANGE (Tibetan Buddhist Monk): My grandmother taught me that I shouldn’t wash my hands or pee in the river or make it dirty. I said why? They told me there is a dragon god. I asked them what the dragon god looks like, and they said, "Don't say it, don't say it. You will know when you grow up." Mama and papa told me in secret that this is a sacred lake. But they said, "Don't ever talk about it openly,” because we couldn’t talk about gods. They do not exist in the Communist Party’s eyes; they are superstitions. If anyone talked about a god they would be beaten, so we wouldn’t dare to say it. But through thick and thin in a country that’s seen so much political upheaval and social change, those fundamental values have endured, he says.

Who will protect the environment? In the West and in China, it’s the government's responsibility. But the Tibetans don't think this way. This is not the Buddhist way. If you think that way you are not Buddhist. You are the protector. No matter if you are a newborn or an 80-year-old, you are all protectors. You are all responsible. You have the responsibility. All life should be protected.

DE SAM LAZARO: Back in China’s capital, Liu Jianqiang, guided by Tibetan monk Qiamei Rinpoche, says his spiritual journey has changed the way he sees the world and his whole approach to writing.

JIANQIANG: Before I only wrote from a legal point of view: it’s wrong, this is a national park, and how can you destroy it? Now when I write, in my mind what I thought is that they are fishes, they are millions of lives. When I write this way I thought that i should speak on their behalf. I shouldn't just think of what is good for us, what's good for humans. I can clearly see my change.

DAI BINNGUO (Chinese Politician and Diplomat): What we think in our hearts and minds will determine the state of the environment. Traditional Chinese culture promotes harmony between man and nature and encourages limited consumption and a simple way of life. We support this. We don't oppose taking from nature. We do oppose over-exploitation. We want gold mountain, but we also want clear water and green mountain.

PALMER: I think one of the things I’ve seen over the last few years, and increasingly so, is a sense that if there is going to be some kind of Chinese solution to these issues, it is going to come out of Chinese traditional culture. So my sense is that the partnership between religion and government around environment is only going to get stronger and stronger.

DE SAM LAZARO: A partnership that he hopes will help lower the heavy environmental price China is paying for its economic progress of recent decades.

China’s massive environmental crisis has its traditionally secular state looking to religion to encourage deeper values, more compassion towards nature, and the creation of what some governmental officials are calling “an ecological civilization.”