KIM LAWTON: In suburban Maryland, teenaged siblings Henry and Karen Castellanos are taking a walk with their uncle and two young cousins. It’s a world away from their former lives in El Salvador, where violent gangs so terrorized their community, people were afraid to leave their homes.

HENRY CASTELLANOS: They start killing in front of our house. Every day was getting worse.

LAWTON: Henry says gang members followed him everywhere, making threats and trying to force him to join them. One of Karen’s close friends was raped. The situation become so desperate that in March 2012 their parents decided to send them to the US, unaccompanied, to be with their uncle. Henry was 16, Karen 14.

HENRY CASTELLANOS: My whole family decide that it will be a better future for us to travel to the United States.

LAWTON: Their father paid a smuggler, known as a “coyote” to take them on a perilous four-month-long journey through El Salvador and Mexico and into the US. Sometimes they rode in cars, but often they walked through the desert. 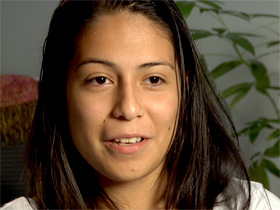 KAREN CASTELLANOS (via translator): In the desert we ran into wolves, a snake. We walked for three nights and I remember that the last night I didn’t think I could walk anymore because we walked from six at night to six in the morning.

HENRY CASTELLANOS: I just wake up sweaty and remember all those times that I was sleeping outside in the coldness, remember my family and trying to keep myself together.

LAWTON: The Castellanos came at the beginning of an unprecedented surge of unaccompanied minors coming largely from the violence-stricken nations of El Salvador, Honduras and Guatemala. From October 2013 to August 2014, more than 65,000 migrant children entered the US and now await court action on their fate. Some people of faith are trying to help them through the complicated legal process.

LENNI BENSON (Safe Passage Project): A nation should be judged on how it treats children.

LAWTON: Looming in the background is an intense national debate over whether the unaccompanied minors ultimately should be sent home.

JIM ROBB (Numbers USA): What we should do with people already here is reunite them with their parents in the countries they come from.

KIM LAWTON: Under a 2008 law designed to protect victims of trafficking, unaccompanied minors entering the US who are not from Mexico or Canada are not immediately returned to their country of origin. Instead, they are granted a legal hearing. They may apply for Special Immigrant Juvenile Status, or for Asylum if they claim to be fleeing persecution. The unprecedented number of children from Central America is overwhelming this process. 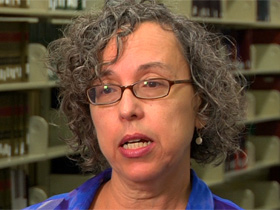 LAWTON: New York Law School Professor Lenni Benson is director of the Safe Passage Project, a group that recruits and trains pro-bono attorneys to represent immigrant youth. She says because immigration proceedings are not criminal proceedings, the US government is not required to provide free counsel.

BENSON: The law is so technical and complex that for a child to navigate its corridors without an attorney, it’s impossible. The impact of not having an attorney is the difference between being able to stay in the country and become a lawful resident and being deported or living undocumented.

LAWTON: The government has been trying to expedite the process by fast-tracking the child migrant cases through what’s known as a ‘rocket docket.’ Even so, the fastest cases will likely take at least a year, maybe two, before they’re resolved. This has strained many legal resources and compounded the need for attorneys willing to take on the cases.

Several religious groups have been trying to provide legal help for children like Henry and Karen, who were apprehended soon after they crossed the US border. They were separated for weeks before they were sent to live with their uncle in Maryland and began attending school. They received legal representation through Catholic Charities of the Archdiocese of Washington.

JENNIFER BIBBY-GERTH (Catholic Charities Immigration Legal Services): Catholics Charities’ purpose is to help people who are disempowered, and this is one population that is.

LAWTON: Attorney Jennifer Bibby-Gerth says Catholic Charities is having a tough time keeping up with the demand. 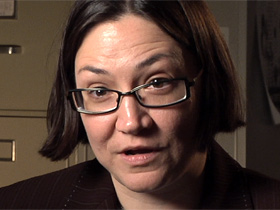 LAWTON: Many local congregations are also offering support, including Bibby-Gerth’s parish, St. Camillus Catholic Church, in Silver Spring. She says volunteers can drive children to court hearings and legal appointments, or help with Spanish translation. Psychologists and mental health professionals can help with evaluation and counseling. After Mass on this Sunday, interested church members gathered to hear more.

ASHLEY FEASLEY (U.S. Conference of Catholic Bishops): Who are these children and why are they coming?

LAWTON: Many people of faith see aiding migrant children as a religious imperative.

LINDA HARTKE (Lutheran Immigration and Refugee Service): From a Christian perspective, but I think it’s also true of many other faiths, we’re called to love and serve our neighbor, not the neighbors that we choose, but the neighbors that God gives to us.

LAWTON: Lenni Benson’s grandmother was an unaccompanied child who fled religious persecution in Russia. She says her immigration work comes out of her Jewish faith and the numerous commands in Scripture to protect the stranger in your land.

BENSON: This rhetoric of how do you treat the stranger in a land? How do you embrace those who need assistance? The more you study it the more you see every world religion has this tenet of being hospitable to those who are in need who come to you and ask for assistance.

LAWTON: But not all people of faith agree that the best way to help migrant children is to let them stay in the US permanently. Jim Robb is a vice-president at Numbers USA, an advocacy group that tries to reduce illegal immigration numbers. 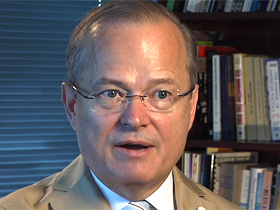 ROBB: We need to use the immigration laws and even tighten them up so that people will understand that when you come here, if you’re not legal, and you don’t have a legitimate political claim or religious claim, you’re going to be sent back immediately.

LAWTON: Robb is also a lay leader at his Anglican Church. He says while he supports scriptural mandates to help others, he believes that should be balanced with verses demanding justice.

ROBB: When does mercy given to one cause a lack of mercy? When is it unmerciful to someone else? If you have a group that’s coming in, a large group and they begin to receive resources that means other people are going to have to in the end have less resources.

LAWTON: Benson argues that the US must continue its tradition as an international advocate of human rights and liberty.

BENSON: The question for our government will be even if they have deportation orders, is it ethical and legal to remove a child to a country of origin if we aren’t assured that that child will be safe upon return?

LAWTON: Robb worries that allowing them to ultimately stay will encourage even more people to attempt the dangerous journey.

ROBB: We’re giving the impression to millions of people that it’s ok to come and when you come everything will be provided. There will be a job, you will be reunited with whoever you know here and that’s a cruel thing to do.

LAWTON: Still others say it would be cruel to send them home.

HARTKE: No child who expresses credible fear for their life if they’re returned to their country of origin should be forced back.

LAWTON: More than two years after they arrived, Henry and Karen Castellanos have been approved for Special Immigrant Juvenile Status and can apply for a green card. Although they miss their family in El Salvador, they are dreaming about a new future.

KAREN CASTELLANOS: I want to finish school and be a doctor or maybe a teacher.

HENRY CASTELLANOS: I don’t feel afraid anymore for someone to try to kill me or do something. Now I can go to school and I’m learning. I, my think that I have a better future.

LAWTON: They say they’re glad they made it, but wouldn’t want anyone else to go through what they did to get here. I’m Kim Lawton in Silver Spring, Maryland.

Tens of thousands of unaccompanied migrant children from Central America have crossed the US-Mexico border, many being sent by their parents to escape gang violence in their native countries. While the US immigration courts attempt to quickly process them through the legal system, religious groups such as Catholic Charities, the Lutheran Immigration and Refugee Service, and others are also responding.

Religious Leaders and the DREAM Act