KIM LAWTON, correspondent: With prayers and celebration, leaders of the Greek Orthodox Archdiocese of America dedicated the site of the future Saint Nicholas National Shrine at the World Trade Center. It will overlook the new 9/11 Memorial. The St. Nicholas parish was established by Greek immigrants in 1916. In 2001, about 70 families worshipped there, and many Orthodox and non-Orthodox workers from the Wall Street area would come during the week to pray. When the towers fell on 9/11, the tiny church was crushed. Only a few remnants were dug out of the rubble: two torn icons, a charred Bible, and some liturgical items, including a twisted candelabra.

FATHER EVAGORAS CONSTANTINIDES (Greek Orthodox Archdiocese of America): It really felt like we were losing a member of our community and it was something that, as we have struggled to deal with it and struggled to mourn Saint Nicholas, it’s something that today we’re also very pleased and very grateful to be here to start the rebuilding process. 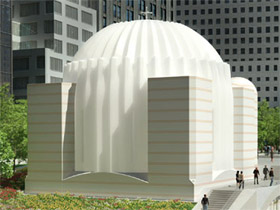 LAWTON: It’s been a long time coming. For years, rebuilding plans were delayed because of a legal dispute between church officials and the Port Authority of New York and New Jersey, which has overseen all rebuilding at Ground Zero. Under a negotiated agreement, the new St. Nicholas will be on a larger site just a short distance from its original location. The $38 million rebuild was designed by prominent Spanish architect Santiago Calatrava. So far, the archdiocese has raised $7 million for the project. Along with serving as a regular Greek Orthodox parish, the new St. Nicholas will include a nondenominational area intended to be a place of pilgrimage for those coming to the 9/11 Memorial.

ARCHBISHOP DEMETRIOS: As a center for bereavement, for comfort, for prayer, for meditation, for quietness in the midst of any turbulence of life.

LAWTON: Church officials hope the shrine can be a witness to people of all faiths about the enduring power of hope, even in the midst of unspeakable tragedy.

CONSTANTINIDES: Next to the place where the most tragic thing that has ever happened on American soil happened, it needs to be a place to offer, to welcome, to open, and to accept all sorts of people.

LAWTON: The new St. Nicholas is expected to be completed in two years…just in time for the parish’s one-hundredth anniversary. I’m Kim Lawton reporting

St. Nicholas Greek Orthodox Church in Lower Manhattan was crushed by the falling Twin Towers during the terrorist attacks on 9/11. On October 18, the site for the future church, a national shrine, was dedicated by leaders of the Greek Orthodox Archdiocese of America.