DAVID TERESHCHUK, correspondent: In Abita Springs, Louisiana, the wooden framework of a 40-foot tower goes up as this Deep South community throws itself into a major building effort. These Southern Baptists are raising a new church through their own labors, under the guidance of a professional timber specialist.

DAN REAGAN (TimberhArt Woodworks): You have the congregation pitching in and becoming part of the construction team. They’re putting their own sweat-equity into it and that ownership really helps. It's an honor to be working with somebody who cares about what they’re going to be getting.

TERESHCHUK: The church taking shape here in Abita Springs may be new to the people who’ll soon be worshipping in it, but it is, in fact, very old. Its story begins a long time ago, and perhaps more remarkably, very far away from here.

Off to the distant north, on the Atlantic coast of Canada, lies the largely rural province of Nova Scotia, and it’s well-scattered with churches, often historic and classic in style. But at All Saints, a 200-year-old Anglican church in Granville Centre, the congregation became so small in recent years that the parish could no longer maintain its building. 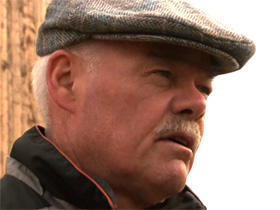 REVEREND KEN VAUGHN: This is a part of rural Nova Scotia, and our issues around depopulation mean we end up having buildings for which we have no future use.

TERESHCHUK: As Nova Scotia churches have been decommissioned, they have sometimes become private homes. But the people of All Saints wanted their building to remain a sanctuary, even though it had to be sold.

VAUGHN: The primary concern was that it continue to be a church for others. Having been here for as long as it has been, better that than simply being torn down and destroyed.

TERESHCHUK: And so the Louisianans entered the picture. Pastor Jerel Keene of Abita Springs wanted a real church to house his congregation. At the time they had only makeshift worship arrangements. At first Pastor Keene, with a historic structure in mind, searched for his ideal building just in the American South.

PASTOR JEREL KEENE: I began looking in the Mississippi Delta, along East Texas for old churches. After looking for maybe seven or eight months, a year, I saw something online in Nova Scotia, a nice church. And so I flew up there, liked what I saw. And I walked through a nine-foot door and I said, “Wow. This is really nice. You know, this is the real thing.” So I fell in love with it immediately. I told them I wanted it, we’ll buy it, let’s do it.

TERESHCHUK: A mammoth task then followed. The church was taken apart, in itself no easy matter, because of the solid way it was originally built—well-seasoned, old-growth spruce timbers and yellow birch braces, fashioned entirely in keeping with the area’s rugged farm buildings.

REAGAN: One of the things about this building that is certainly interesting to me is that it’s built in the style of the barns by craftsmen who knew what they were doing. The whole building is very sturdily built.

TERESHCHUK: Parishioners at All Saints like Allen Slauenwhite were proud of their church’s historic past and were also now hopeful for its future. 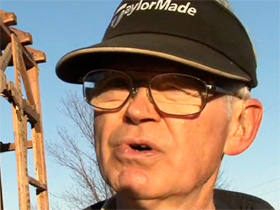 ALLEN SLAUENWHITE (All Saints Parishioner): What strikes me about it is the artsy-craft that went into that building. They didn’t have a chainsaw or the power tools we have today, and that building has been here, you know, all those years since 1814. I’m in agreement with what’s taking place. It’s going somewhere south, and it’s going to be put to good use.

TERESHCHUK: The church’s ancient timbers and its Georgian-style windows were loaded onto an 18-wheel tractor-trailer, and they were trucked the entire 2,000 miles to southern Louisiana.

PASTOR KEENE: To me, getting it here was not even a question. I knew we could get materials here. It didn’t seem like a big feat to me as a Christian. I know the Lord will give us whatever we ask for.

TERESHCHUK: Then came the reassembling of all the timbers, each fitted again into its previously matching piece. It involved some struggle.

PASTOR KEENE: A lot of wiggling of, of heavy wood and a lot of maneuvering and tapping in dowels. Just imagine a big puzzle.

TERESHCHUK: The team was helped, to some degree at least, by the original Nova Scotian builders’ own coding that employed Roman numerals to identify each joint.

REAGAN: The Roman numerals, their numbering system, is all on the outside of the frame. So we labeled it with our own labeling system. I’m double-checking that as we put it back together with their system.

TERESHCHUK: Is it matching up?

REAGAN: Yeah, oh yeah. That’s how I know that things are right for where they go.

TERESHCHUK: While the church may be replicated physically in its new location, its style of worship will likely be greatly changed. The somber tone often said to typify Canadian Anglicans will be giving way to Southern Baptist enthusiasm. 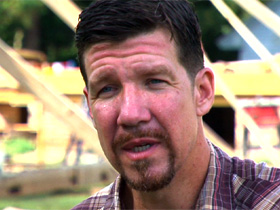 PASTOR KEENE: I’m sure they love the Lord just like we do. But cultures are different. The sermons will be a little different. We do preach the gospel pretty strong. We have a wonderful pianist who jazzes up our hymnal. Everybody in our congregation signs, they sing loud, that’s a rule, and it’s probably the only rule we have is “sing loud.” And we shake the place when we sing. You know, it’s not somber.

TERESHCHUK: The Southerners are effecting another change, too, in a curious coincidence of history. During the 18th century Nova Scotia was home to the French-speaking Acadians. But the British authorities expelled them, as threats to colonial rule, a story immortalized in Henry Wadsworth Longfellow’s epic poem “Evangeline.” Later many Acadians eventually ended up settling in Louisiana and were given the abbreviated label of “Cajuns.”

AMY KEENE: I was able to trace back all of my heritage except for my dad’s—father’s side, back to Nova Scotia.

TERESHCHUK: Amy Keene is the pastor’s wife and comes from a family well-rooted in Acadian-Cajun traditions.

AMY KEENE: I grew up with my great-grandparents, and they spoke French. They did not speak English, and we would have a lot of that culture that’s been lost.

TERESHCHUK: There’s a kind of irony in that Amy’s ancestors back in Nova Scotia, as Catholics and suspected rebels, would have been looked down on by the English-speaking Anglicans whose church is now hers and her family’s.

AMY KEENE: They were maybe not really welcome everywhere that they tried to settle, you know, for different reasons.

TERESHCHUK: And they may not have been welcome in that church?

AMY KEENE: No, probably not.

TERESHCHUK: But whatever big changes may be taking place, continuity and harmony are also on the minds of those involved. Timber expert Dan Reagan’s wife, Kimberley, co-owner of their restoration company, has worked to ensure the church’s historic links remain unbroken.

KIMBERLEY REAGAN: I spoke with the congregation just before coming down here, and they sent their warmest greetings, and there’s hope of continuing dialogue between the two congregations.

TERESHCHUK: It’s hoped that the church might be ready for use by Christmas time, when these revered old rafters could be ringing again to some very different rhythms from before.

For Religion & Ethics NewsWeekly, this is David Tereshchuk in Abita Springs, Louisiana.

Pastor Jerel Keene of Louisiana Church in Abita Springs, Louisiana needed a permanent church building for his Southern Baptist congregation. The search led him all the way to rural Nova Scotia to a 200-year-old Anglican church whose dwindling number of parishioners had put it up for sale. The church was disassembled and shipped over 2,000 miles, and now it is being rebuilt by Keene’s congregation under the guidance of a timber frame specialist.