BOB ABERNETHY, host: Protests continue across the nation in the wake of grand jury decisions in Missouri and New York not to indict white police officers in the deaths of unarmed African Americans. Religious groups have played a key role in many of the protests. This weekend (December 13-14), many churches are holding special services with the theme “Black Lives Matter.” Many faith groups have been calling for a new national dialogue about race. Joining me with more on this is our managing editor, Kim Lawton, and Lisa Sharon Harper, senior director of mobilizing for the Christian social action group Sojourners.

Lisa, welcome. What's the single most important thing that churches can do to combat racism?

ABERNETHY: Listen? And listen to what? What would they hear?

HARPER: Well, I think they need to listen with humility to the stories of particularly people who are most affected by the crisis that we're finding in our urban centers, in particular, over militarization of police forces against black people and brown people.

KIM LAWTON, managing editor: And how are faith groups, congregations, others trying to do that already? How are they providing a space for that to happen? 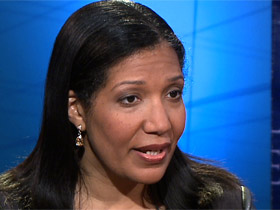 HARPER: Well, I'll tell you. Just in the last two weeks I have participated in four major conversations on race and racial justice in multiple different contexts, from white to multiethnic, national leaders, grassroots—there's major conversations happening, and people are beginning to make the bridge between conversations and protest.

HARPER: Well, the number one thing that needs to be done is we need to grow in understanding. I think that we haven't listened to the young people, churches including, and so when I say listen, I really mean listen to the stories of the young people, because they are ones that are bearing the brunt of most of the crisis that we're experiencing—Michael Brown, Jonathan Crawford. I mean, the drug wars in particular focused massive amounts of ammunition, of police forces in our urban centers, and as a result those places have become war zones, and our young people are the ones who are bearing the brunt of that.

LAWTON: But how do people move from talking and, you know, even protesting to maybe concrete solutions? How are there ways that communities and police and faith groups and young people can maybe join together to actually move beyond protests and talk, to change?

HARPER: Well, see, there are coalitions across the country, and there's a national coalition called Ferguson Action,  and it's come together, it's brought together hundreds of different coalitions. They have something called a Dream for a New America, a Vision for a New America, and a list of clear demands. And that dream and that vision actually has its roots—I don't know that they were thinking of it, but you can see it in the Bible, you can see it in Scripture. You can see it in Isaiah 65, you can see it in Zechariah. It's a vision where all people have at least the capacity to have fair housing, jobs, education. And what they say in Ferguson and in the Fergusons across the country is that if we really want to solve the problem of police violence, what we really need is we need jobs. The young people just need jobs. They need to be able to have books in their schools, and they need to have housing that is adequate and affordable.

ABERNETHY: And you think churches can lead the way to this?

HARPER: I think churches can add a huge amount. They can actually, first of all, boost the morale of the young people who have been on those lines for hundreds of days now, 126 days today. They can also, through the power of moral authority, call for more and more people to not only join in the streets, but join in the voting booth in order to vote for justice.

LAWTON: And just very briefly, talk about how white churches have been responding, maybe in a different way, very briefly.

HARPER: Absolutely. I'll talk first about Ferguson. When we first started, we actually started by organizing an evangelical network in St. Louis that is now deeply embedded and involved in the protests that are happening in Ferguson. I'm going up to New York City to take part in a Jericho march, and lots of evangelicals will be involved in that as well.

ABERNETHY: Lisa, many thanks.

HARPER: Thank you so much.

How are faith groups mobilizing on issues of race? Protests continue across the nation in the wake of grand jury decisions in Missouri and New York not to indict white police officers in the deaths of unarmed African Americans. Religious groups have played a key role in many of the protests. This weekend (December 13-14) many churches are holding special services with the theme “Black Lives Matter,” and faith groups have been calling for a new national dialogue about race. Watch our conversation with Lisa Sharon Harper, senior director of mobilizing for the Christian social action group Sojourners, who says the most important thing churches and congregations can do to combat racism is to “listen.”