BRUCE FEILER Host and Narrator, Sacred Journeys): Why is pilgrimage so popular in America? Because we are all pilgrims in this country and that means we all have an antecedent place. What people are seeking is not some thunderbolt that is going to come from the sky, but a bit of quiet, and a bit of discomfort, and a bit of openness that allows them to hear whatever it is they’re seeking.

Hajj Pilgrim: I truly was alone with God in a sea of 5 million people.

Kumbh Mela Pilgrim: My soul always seeks to be with other souls on the same journey. There’s a lot of deep, deep spirituality here and that’s what I’m trying to tune into.

FEILER: And for many it is this experience of trying to get closer to God and I think that the way that works is there is so much noise in our lives; sometimes in order to hear, you have to sort of step away from that ordinary life and open yourself to the extraordinary. 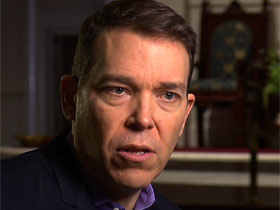 It’s difficult to make one of these journeys. You’re traveling to another country, multiple time zones away, you’re staying in unfamiliar places, eating unfamiliar foods and you are putting yourself outside your comfort zone and that’s part of it.

Sacred clothing is part of many pilgrimages. Here it's Hindu prayer shawls, printed with sacred texts. In the Hajj people go wearing their own clothes, part of the journey is to take off your clothes, put on the ritual clothing, the men shave their hair, and the women make a symbolic cut shedding your former self and opening yourself up to what might happen.

You see people struggling and questioning, and yearning and wanting and ultimately almost to a T saying that there was a moment where they had a personal connection with what they were looking for.

Another similarity we see among the different films is nature. You got mountains in Japan, you’ve got hills and mountains in the Hajj. You’ve got hills of Galilee during the Jesus walk. You also see rivers a lot. You see the bathing in the Ganges, you see the sacrificing to the river God in Nigeria. They want to get us out of the pew, of the home, of the dining room and get us back into nature.

One of the powers of a pilgrimage is that people have gone on the journey before you. Sometimes it’s thousands of years. There is I think a power that comes from walking on a walk that has been ground into the stones, into the dirt, into the path and just the act of putting your own feet on that path helps keep it alive.

I’m in Western Nigeria, the heart of the Yoruban people. In Yoruba culture, music and dance are direct pathways that connect the physical world with the Godly one.

FEILER: In some ways the pilgrimage never really culminates until you go back home, until you find out what lessons you have taken from the place that will change how you live back at home and ultimately, I think that’s why people do it. To me the most powerful moments that I encounter are people who say I’m going to have the experience, but in the end I’m going to make the meaning and decide what import it’s going to have in my own life.

On December 16, PBS will debut “Sacred Journeys,” a new film series by author and host Bruce Feiler presenting a study of six religious and traditional pilgrimages made by people all over the world. “We are all pilgrims in this country, and that means we all have an antecedent place.” What people are seeking, says Feiler, when they go on a pilgrimage “is not some thunderbolt that is going to come from the sky, but a bit of quiet, and a bit of discomfort, and a bit of openness that allows them to hear whatever it is they’re seeking.”