BOB ABERNETHY, anchor: Forty-two years ago, in a village south of Paris, a French-Canadian named Jean Vanier created a home where the mentally disabled could live in dignity and where others could learn from them the value of sharing and acceptance. There is now a worldwide network of these communities called L'Arche, the French word for Arc, a symbol of hope. Vanier rarely leaves his community in France, but he did recently come to Chicago, as Judy Valente reports.

JUDY VALENTE: These are the people Jean Vanier calls his friends. People he describes as "pushed aside, with broken hearts." People, he says, who have "transformed" him.

JEAN VANIER (Founder, L'Arche House): My life is to live with them — to be with those who are fragile, vulnerable and weak. I'm not sure that we can really understand the message of Jesus if we haven't listened to the weak.

JEAN WILSON (Core Member, L'Arche House): He's my one man and my one man only — I love this man.

VALENTE: Those who came to greet him included the residents and staff of the L'Arche house he helped establish in Chicago. The mentally challenged here are called "core members" because they represent the "core," or heart, of L'Arche. 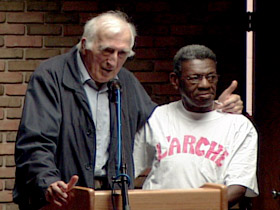 Mr. VANIER (at microphone with Elbert Lott): We're different. We have different backgrounds. But we're together.

ELBERT LOTT (Core Member, L'Arche House, at microphone): I had a hard time. Rough times. Barefoot boy, down south. My father be mean to me.

Mr. VANIER: (to Mr. Lott) Because Dad wanted a son who could maybe do big things, and he looked down upon you.

Mr. VANIER: He was mean to you.

Mr. LOTT: He was. Well, all that now behind me now. Here I am, famous. 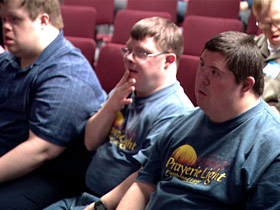 VALENTE: Jean Vanier talks about the loneliness of people who are different — how they can feel unwanted, unloved, and therefore unlovable. But, he says, the weak and wounded have a "secret power" to touch us. And that by opening our hearts to them, we become more human.

Mr. VANIER: We become more human with two realities. One, as we discover that we are able to love people — and when I say love people, it means to see their value and their beauty — and that we can love people who have been pushed aside, humiliated, seen as having no value. And then we see that they are changed. And at the same time, we discover that we too are broken, that we have our handicaps. And our handicaps are around about elitism, about power, around feeling that value is just to have power.

VALENTE: Before coming to L'Arche, these people were in institutions, or on the streets, or in families that couldn't care for them or didn't want to. 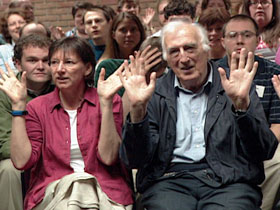 VALENTE: The son of a French-Canadian diplomat, Vanier served in the British Royal Navy during World War II, then he taught philosophy in France. He has never married. For a time, he considered the priesthood. But in 1964, he found his calling, opening the first L'Arche home in a small village south of Paris.

LINNEA FIELDS (House Coordinator, L'Arche House, to Chris Abri): And where are these mugs going?

VALENTE: The Chicago L'Arche community owns a home on the city's west side. The core members, with the help of the assistants who live with them, have prepared gift packages to distribute during Vanier's visit to the city. Some have met Vanier during his previous travels.

VALENTE (to Mr. Lott): What did you talk about?

VALENTE (to Ms. Wilson): What will you say to him when he comes?

Ms. WILSON: Come on in, we'll give you something to eat and drink.

Mr. ABRI: Because I like him, because he's a big tall guy and got gray hair that I like.

VALENTE: Most of the core members have outside jobs. Here, they live family-style, helping with chores and with the cooking. The homes are grounded in the Catholic faith, but core members don't have to be Catholic to live there. Vanier refers to L'Arche communities as "little places where love is possible." 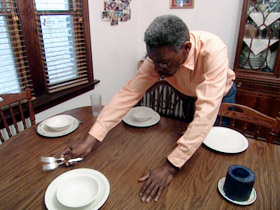 Ms. FIELDS: They know this is their home. I've seen the core members grow in their self-confidence a great deal.

VALENTE: But these small communities are not without their problems.

Ms. WILSON (to Mr. Abri): Chris, get the cups! What's the matter with you? Gee whiz.

Mr. VANIER: There are explosions, there can be violence, there can be conflicts with other assistants. There's a sort of constant paradox that through all this suffering and pain and fatigue, at the same time we are seeing incredible beautiful things. That is to say, people who are transformed and we are beginning to sense that we ourselves are transformed.

Ms. FIELDS: I think the prayer time is what sets us apart. That's what drew me to L'Arche, the spirituality.

Core Members, L'Arche House, praying: Jesus, we thank you that you're here with us now. 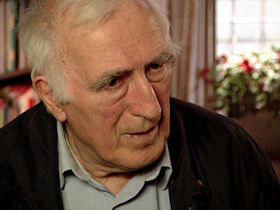 Mr. VANIER: Prayer is a sort of opening of a door to something, which gives meaning to all the pain of the finite. And yet it's something we can just rest in. I think fundamentally, prayer is to rest.

VALENTE: The 77-year-old Vanier was in Chicago to accept a lifetime achievement award. He dressed for this occasion as he always dresses: in an open shirt and his trademark blue windbreaker.

Mr. VANIER: People with disabilities are not in rivalry and competition. What is their cry? Their fundamental cry, which I had the privilege to hear, is a very simple question: "Do you love me? Do you want to be my friend?" So that's what L'Arche is about. It's becoming a friend.

VALENTE: Vanier told this well-heeled audience that generosity is good. But he challenges people to go beyond "giving."

VALENTE: Vanier expects L'Arche to thrive long after he's gone. People will continue to be called to these communities, he says -- not because of anything he's accomplished, but because their hearts have been touched by the weak and rejected.

Mr. VANIER (at microphone): Living in community — L'Arche — it can be painful. But it's super. I never understand why everybody's not there. This is my problem. We have fun together. We laugh, we sing together. It's great!

I can say that we have seen people rising from the dead -- who arrived in there closed up in their anguish, their angers. And then discovering peace.

VALENTE (to Mr. Vanier): What's left to be done in your life?

VALENTE: But on this day, he's content to enjoy life -- with his friends.

ABERNETHY: There are more than 130 L'Arche communities in 33 countries.

In a village south of Paris, a French-Canadian created a home where the mentally disabled could live in dignity and where others could learn from them the value of sharing and acceptance. There is now a worldwide network of these communities called L’Arche, the French word for Ark, a symbol of hope.