BOB ABERNETHY, correspondent: All over the country, young people—the generation called millennials—are volunteering with not-for-profit service organizations doing good works: Teach for America, AmeriCorps, City Year. We have a profile today of a man who thinks churches should be doing a lot more of the same kinds of projects and is spending his full time helping young Christian seminarians do just that.

Wayne Meisel is an ordained Presbyterian minister who has made it his mission to help seminary students help the poor. He is supported by several foundations, churches, and friends. He travels to schools all over the country, but his home base is the Princeton Theological Seminary in New Jersey.

REV. WAYNE MEISEL: We have a generation of young people in their 20s and 30s that define themselves by their commitment to service and justice work. The challenge is that many of them, I think most of them, do not believe the church cares about them or the causes they care about. There’s this bubbling fervor and energy and possibility that we just have to figure out how to both tap and how to support, and then for guys like me to get out of the way. 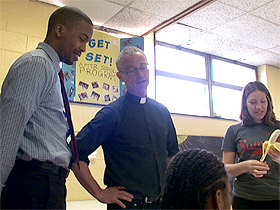 ABERNETHY: Craig Barnes is the president of Princeton Theological Seminary.

CRAIG BARNES (President, Princeton Theological Seminary): Wayne is a fascinating and charismatic kind of leader. He works best kind of on the margins of schools, churches, and organizations, and he’s a visionary. But he doesn’t work through the system. He works with the students themselves, and he excites students, and they become all caught up in his vision of changing the world and thinking that their life can make a real difference. And this is not just happening in Princeton. This is happening in seminaries all over the country. So it’s a phenomenon.

The students are asking different questions in class. Our professors are developing their syllabi differently to account for this passion they have to not just study ethics but to do ethics along the way. These students actually are devoted to loving thy neighbor. And they won’t tolerate any more sitting in class taking notes on wonderful lectures about social responsibility and then folding up their laptops and just going home.

ABERNETHY: On the Princeton Seminary campus, on a beautiful spring morning, we talked with students who know Meisel. One way or another, each spoke of the need for change.

THERON COOK: If we don’t do it, if seminaries don’t do it, who will? If the church doesn’t speak to the moral and ethical issues that are confronting our country, who should? 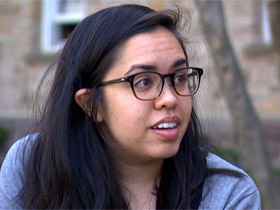 KELSEY HAYWISHER-FAUL: I understand my role as a Christian as working towards justice in our communities.

ABERNETHY: You’re going to be a pastor?

AMANDA HUELS: I think we could make great strides if seminarians started working together nationally and schools across the board started training students to be the kinds of pastors that can make these changes.

ABERNETHY: The national service project AmeriCorps had as one of its architects, among many others, Wayne Meisel. It has no religion component, but the movement Meisel wants would be Christian—within limits.

MEISEL: The slogan for the movement that I’m a part of and that I see is “For the Whole World to Know Christ’s Love.” That doesn’t mean people need to be Christian. It means that the people that identify themselves as Christians need to be showing that grace, showing that hospitality, showing that acceptance.

ABERNETHY: By example, not by proselytizing. 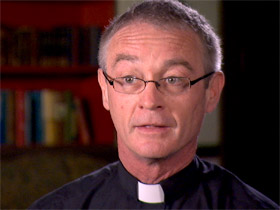 ABERNETHY: I asked Meisel whether what he wants could become political.

MEISEL: God, I hope so. We are called to be advocates. So we can’t just sit around and talk about something. We can’t just show up and hand out a hamburger or dish out soup. We have to make a commitment to be in relationship with people and to walk with them and to see what are the things that are at the root of some of these challenges, and then moving forward with that so that people can have decent lives where they can take care of their families and have a sense of who they are.

ABERNETHY: Thirteen miles from the campus of Princeton Seminary is another world—of the homeless in Trenton. The director of the Rescue Mission there is Mary Gay Abbott-Young. She said she once told Meisel she had a project.

MARY GAY ABBOTT-YOUNG: "Wayne, I need this done." He said, “What you need is seminary students.”

ABERNETHY: So Meisel produced the students and they helped the homeless with the paperwork necessary to get shelter and care. 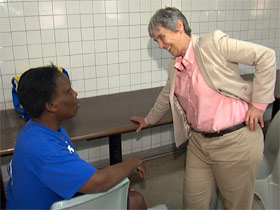 MARY GAY ABBOTT-YOUNG: It’s truly a relationship that forms in a matter of minutes that the client says, "This is someone who I can trust." We’ve now had hundreds of people get welfare who couldn’t get welfare before that. How life changing is that for them? Yeah.

ABERNETHY: Not far from the Trenton mission is a Presbyterian church with an after-school program, also staffed, in part, by seminarians. Karen Hernandez-Granzen is the pastor.

REV. KAREN HERNANDEZ-GRANZEN (Westminster Presbyterian Church): I think he has met a need that these young people have, these seminarians, and that is to immediately put their book knowledge into practice. To not get caught up in the ivory tower of their seminaries, but to walk the talk.

ALAN THORNE: With the decline of Christendom in the West, you could call it, there’s been a need for civic engagement to find new meaning. We’re embarking on something of a new world, and it’s at least my hope that the church finds a good place there as well.

ABERNETHY: Neither Meisel nor anyone else can predict whether a national movement of seminary students could change neighborhoods and lives. But Meisel is confident it can happen.

MEISEL: “Here I stand. I can do no other.” I can claim a role that speaks of a message of inclusion, of joy, of love, of service, of justice. That’s what I get to do.

ABERNETHY: A professor friend of Meisel’s told us Meisel can spend five minutes with someone and change his or her life. He said, “I’ve seen it happen.”

Rev. Wayne Meisel works with students at the Princeton Theological Seminary and other divinity schools around the country, hoping they can create a national movement of young Christians who want to make the world a better place, especially for the poor.