LUCKY SEVERSON, correspondent: It must come as a surprise, even a shock to these inmates, this warm, loving reception at the Branchville Correctional Facility, a medium security prison in Indiana. The volunteers greeting them are from the Kairos Prison Ministry, and this is the beginning of an intense 72-hour experience the ministry hopes will transform the lives of the inmates who signed up.

INMATE: I came here because everybody says it’s pretty awesome and you get to eat some pretty good food, so...

WARDEN KATHY ALVEY (Superintendent, Branchville Correctional Facility): A lot of the guys will joke around that they are going to Kairos for the food that they bring in, and they bring truckloads of food, but you know when they leave that weekend, they leave with more than a full belly. Their hearts are filled.

JON NUFFER (Kairos Volunteer): I cry every weekend. I do, you know. You couldn’t imagine how much you get out of it. 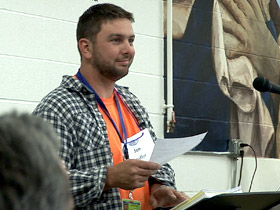 SEVERSON: Today Jon Nuffer is one of the volunteers, but he was in Branchville on a drug charge when he first experienced a Karios weekend.

SEVERSON: But he did “get it” here, during a Kairos weekend. These are deeply personal, soul-searching affairs with one-on-one mentoring and group discussions about things like choices and friendship with God. Volunteers from local churches send uplifting messages from little kids and, for this weekend, 24,000 chocolate chip cookies. There are also services in the make-shift chapel, punctuated with uplifting hymns.

NUFFER: We seek out the tough cases. Those are the guys we want. When God gets a hold of their heart, and they start, the wall starts to crumble, and it’s like peeling back an onion, one layer at a time.

SEVERSON: It’s a journey that becomes more spiritual as it goes along, from one motivational speaker to the next. This is a very organized and scripted 72 hours. Kairos has been doing this for over three decades. 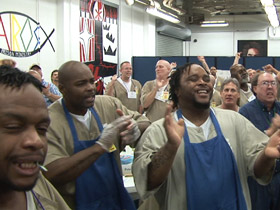 Kairos operates in 35 states, nine foreign countries, over 400 medium- and maximum-security prisons. The program only has nine employees, but over 30,000 volunteers. It’s the volunteers that make the program work, and volunteering for Kairos is not easy. John Bennett had a brother who died in prison. The retired welder has been volunteering for over eight years.

JOHN BENNETT (Kairos Volunteer): We have to have 34 hours of training. We just don’t come in. We’re all trained and schooled in what to do.

NUFFER: We come together as a team of brothers. We don’t just come as a bunch of guys who don’t know each other. We build a love and a bond between us, and when they come up here they see that in us, and then that gives them an opportunity and a hope for them to have that, too.

SEVERSON: David Liebel is with the Indiana Department of Corrections, in charge of volunteers.

DAVID LIEBEL (Director of Religious Services, Indiana Department of Corrections): We get volunteers who otherwise might not have any contact with the criminal justice system who come in, give up their days, their weekends, to be with the prisoners, and even when they’re quiet, it shouts: caring. 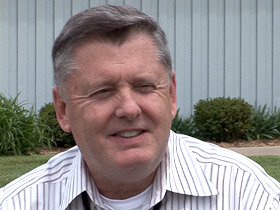 SEVERSON: Michael Dyer is the state director of Kairos for Indiana, a volunteer himself who puts in many, many hours each year.

MICHAEL DYER: (Indiana State Chair, Kairos Prison Ministry International): Usually 42 offenders for a full team—that’s the maximum amount of offenders who can participate in a Kairos weekend. We generally have 44 to 48 team members who come in from the outside, so it’s almost one-to-one.

SEVERSON: Kairos is a nondenominational ministry that preaches plenty of religion, though the parts about fire and brimstone are never mentioned. This is an upbeat experience. One of the most important goals here is to convince the inmates that they are loved.

DONTEL KEYS (Prisoner & Kairos Volunteer): Here we’re a DOC [Department of Corrections] number. I’m D0C number 984463, you know, and that’s what we are. For the most part, we’ve been relegated from human to numbers to paperwork.

SEVERSON: Dontel Keys is serving a sentence for murder. He says Kairos changed his life, so now he wants to change the lives of fellow inmates. This weekend he’s serving as a volunteer in the kitchen. He’s scheduled to be released in two years. 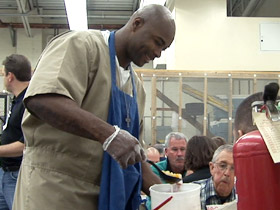 KEYS: We done things in our life that we’re regretful for, and to come to a Kairos weekend and to just feel the love and the passion that these men have for us—it’s amazing, so you really just get caught up in that, you know, just being loved, ‘cause a lot of us never had experienced that love.

SEVERSON: Love also comes in the form of a sealed letter. Frank Rowe is with Kairos.

JOHN COX (Prisoner): We received our letters and got to open them and read them, and it’s a pretty touching experience.

SEVERSON: John Cox is in on a meth charge and was surprised to see his old street pal, Ed Morris, who also served time, now a volunteer, trying to get John to turn a new page.

ED MORRIS (Kairos Volunteer): John and I, we have a past of not so honest citizens kind of past. You know we was, ah, we got involved in the drug scene pretty heavily for a while, and we was, you know, we made some dope together before, we used sell a lot of dope, we’ve done, you know, we’ve seen the bad side of the life. 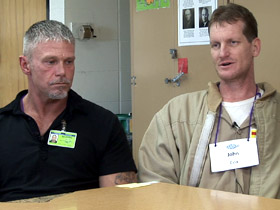 SEVERSON: Branchville has about 1450 inmates at any one time. Most are here on drug charges, though there some are serving out sentences for more violent crimes. Those here in solitary confinement are not feeling the love.

VOLUNTEER (speaking to prisoner): And we’re praying for you.

SEVERSON: So Kairos volunteers deliver bags of chocolate chip cookies and prayers to the segregation unit and throughout the prison.

VOLUNTEER: God bless you, my friend.

SEVERSON: Forgiveness is a big theme here, and that includes inmates especially forgiving themselves.

KEYS: For me, when I went through that moment, and I was asked to forgive everyone in my life, including myself, it was the first time in nearly 20 years that I’ve shed a tear. I had to let it all go. You know, Kairos helped me do that, and it was just an amazing feeling. 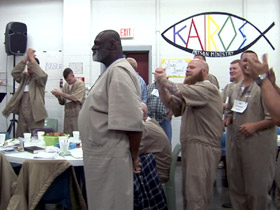 SEVERSON: Although there have been few studies, one in Florida found that in prisons where Kairos operates, recidivism has been cut to less than half the usual rate. Michael Dyer says there’s another way to measure the ministry’s impact.

DYER: Everyone I see involved in this ministry, whether they be a volunteer or an offender, this program, and going through a Kairos program, changes their life, and watching and witnessing that transformation is just an incredible feeling, that you can be a part of that.

CEDRICK HANCOCK (Kairos Volunteer) and WILLIAM SPRADLEY (Prisoner): I love you, and I’m glad we met, and all I can do is thank the Lord for you. I appreciate you leading me on the right path. Wanna give me some love? Love you, my brother. Love you, bro.

SEVERSON: Now Kairos will follow up, back in prison, with weekly and monthly “prayer and share” sessions to keep the love going and, hopefully, the men going straight.

For more than 30 years, trained volunteers from Kairos Prison Ministry have been transforming the lives of inmates at more than 400 prisons with one-on-one mentoring, uplifting sermons, and love.