LUCKY SEVERSON, correspondent: When Michael Crow took over Arizona State University (ASU), he had what he called a “moonshot” dream to create the New American University.

DR. MICHAEL CROW: Moonshot projects are very large, audacious goals and objectives that people think are not possible and makes them possible.

SEVERSON: In the beginning, there were a lot of disbelievers. This is Fred Corey, ASU vice provost.

FRED COREY: When President Crow arrived, many people thought, oh, he’s just going to be here for a few years. He’s just using this as a stepping stone to something else. Ignore him. It’ll go away.

SEVERSON: Mark Killian was for many years with Arizona’s Board of Regents. Now he is director of the state’s department of agriculture. 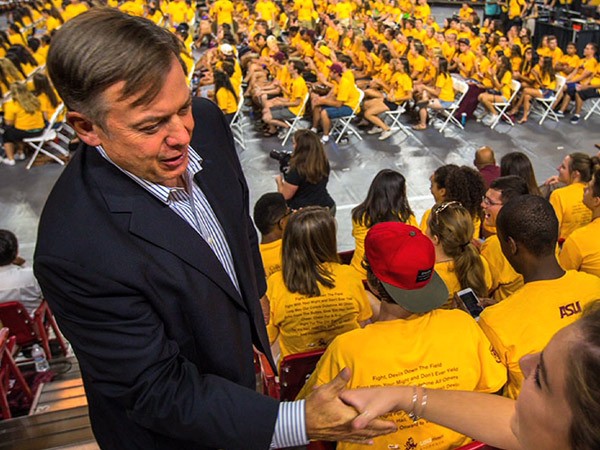 MARK KILLIAN: I thought he was a loud mouth. I thought he was cocky, in fact. I was in a meeting with a group of legislators trying to talk about ASU, and I couldn’t get him to shut up, and when the meeting was over I thought, how am I ever going to sell ASU? I’ve got to get this guy to quit talking.

KILLIAN: He’s into creative destruction. He took a university that was known as a party school, that was an okay university, and he has totally changed that into a first-class academic institution.

SEVERSON: Zoe Baird is president of the Markle Foundation, a charitable organization that collaborates with innovators to promote the advancement of knowledge.

BAIRD: And so what Michael is doing at ASU is he is making it possible for people, wherever they’re ready in their lifetime, to get their college diploma.

SEVERSON: U.S. News & World Report ranked ASU number two among “up-and-coming” schools, and it ranks number three in the number of students who are Fulbright scholars. That’s one reason Starbucks CEO Howard Schultz teamed up with Crow and ASU to create a new program that provides free online education for Starbucks employees or partners. If these partners work 20 hours a week and get passing grades, Starbucks picks up the tab for their education.

CROW: They have tens of thousands of their partners who went to college and never graduated. We have the way to help them to graduate, to overcome this financial burden that many of those students that started college and never finished. You know, it is one thing to start college, have debt, and have a degree. It’s another thing to start college, have debt, and not graduate. 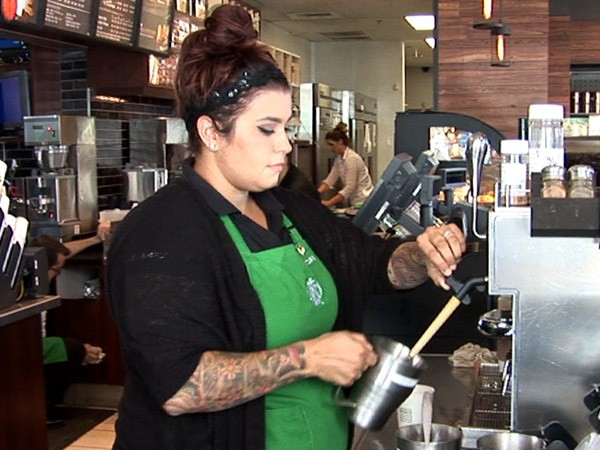 SEVERSON: Partners like Barbara Bowyer, who is the new manager of Starbucks in Gilbert, Arizona.

CROW: Yeah, we think it’s better to start finding ways to measure schools based on what they produce versus who you don’t admit.

SEVERSON: The acceptance rate at some of the top schools like Stanford, Yale, and Harvard is less than 7 percent. ASU accepts over 80 percent. That’s partly because ASU starts preparing future students while they’re still in high school, and even earlier.

This was a failed school in a bad neighborhood before ASU took it over and turned it into a prep school, grades K through 12.

SEVERSON: Deborah Gonzalez is the chief academic officer, and most of her students come from high poverty areas where English is the second language. 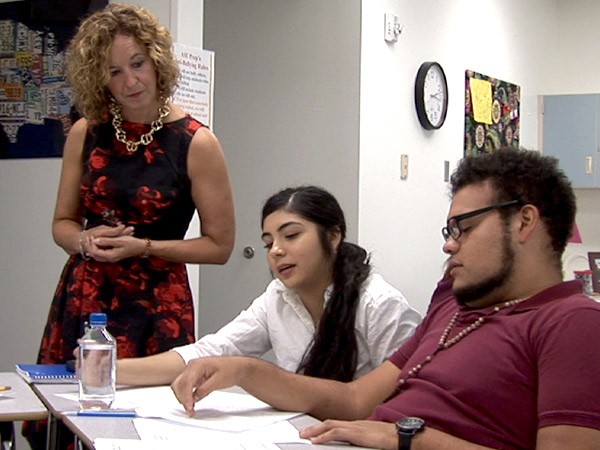 SEVERSON: All of them?

GONZALEZ: All of the students who graduated.

SEVERSON: To make it easier, cheaper, and quicker to get into the university, ASU offers an online roadmap for students who want to transfer, usually from two-year colleges. Martine Garcia is a senior.

MARTINE GARCIA: If I didn’t have this program, I wouldn’t have taken the correct classes that would transfer over to ASU. So it basically set me up so that I wasn’t wasting time and money on classes that I didn’t need.

SEVERSON: Carletta Miller is married with two kids. She went to a two-year college, then transferred here.

CARLETTA MILLER: I am an ASU transfer student ambassador, where I go back to the community colleges and talk to potential students who are looking at coming to ASU from a student perspective on the transfer process, and that’s something I take great pride in.

SEVERSON: There are so many programs here to encourage kids to enroll and then not drop out. An incoming student has an enrollment counselor, curriculum and financial aid advisors, and a success coach. 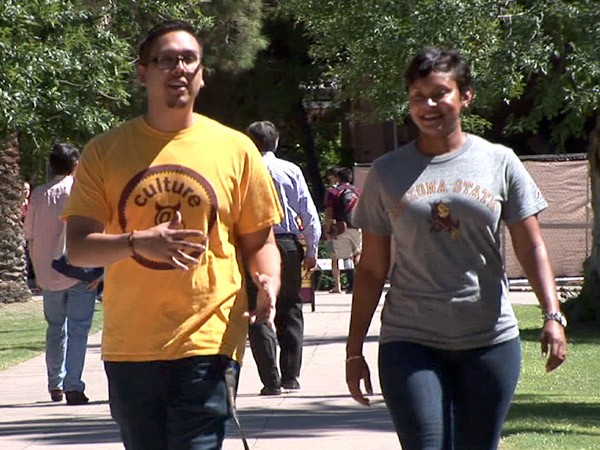 COREY: It’s not an easy transition for an 18-year-old. So we create a team of people who are there to help that student, and there to sort of be that safety net is what we call our success coach.

SEVERSON: This space-age building is where ASU houses its online operation. The school has about 20,000 online students, counting Starbucks employees. Leah Lommel is in charge.

LEAH LOMMEL: Whether they come to ASU in the long run or not isn’t our primary goal at the Global Freshman Academy. It’s to get them started and believe in themselves.

SEVERSON: Global Freshman Academy is only one of ASU’s online programs. It allows high school students, or anyone, to take online courses at ASU at no cost. Then if they do well and want credit, the school charges them a reduced tuition and accepts them as students.

LOMMEL: We’re not just looking at getting someone in. We’re really looking at making them successful, teaching them to be master learners in life, and how to contribute back to their communities when they’re done.

SEVERSON: Crow has grown the number of students at ASU to 70,000 who attend classes at five campuses in Phoenix. Four out of 10 students come from low-income families. In many cases, they are the first in their family to attend college. ASU ranks as one of the more affordable universities for in-state tuition. 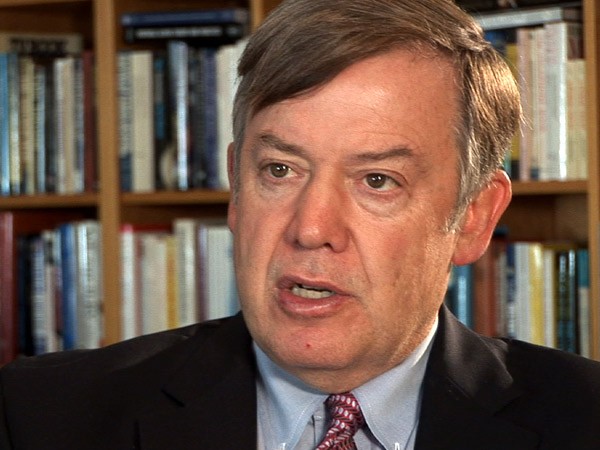 CROW: The elite schools will say we have lots of kids from lower-income families, and the answer is, yeah, but not compared to how many kids are out there.

KILLIAN: People say, well, why do you care so much about low-income people getting an education? That fits in with the values of helping your fellow man, and the quickest way to get people out of poverty is to get an excellent education.

SEVERSON: After Crow arrived, he was criticized when he created new departments and tailored course work to what employers are looking for. In 2010, a Wall Street Journal survey identified ASU students as the fifth most sought after by major employers.

KILLIAN: He’s brought excellence to a new level, and in doing that, he is shaking up the status quo, and when you shake up the status quo people start squealing like fat pigs, and they didn’t like the change at first.

COREY: There are no more naysayers that I know of. Either they retired, or they admitted they were wrong.

SEVERSON: It’s pretty clear by now that skeptics and critics aren’t going to deter Michael Crow’s determination to fix what he sees as a higher education system that is seriously out of date.

SEVERSON: Now Crow has formed an alliance with 11 other universities with 400,000 students to make school more accessible, more real-world practical, and not only for those who can afford it.

Under the leadership of President Michael Crow, Arizona State University is encouraging more students to get college degrees by preparing students for higher education as early as pre-school, and by making college more affordable. Crow hopes more schools across the country follow ASU’s example. “I think public universities have got to step up and say we’re going to figure this out,” he suggests. “We’re going to figure out how to serve the nation.”