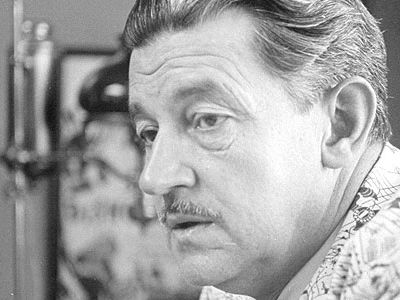 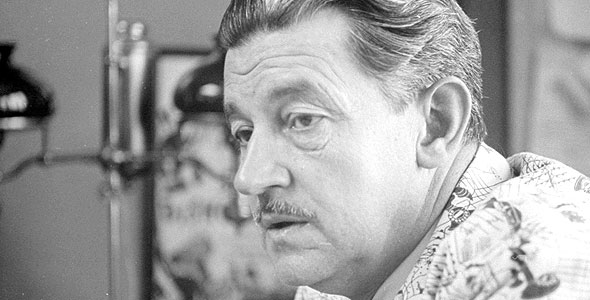 Considered the father of the screwball comedy, Preston Sturges was recognized as one of the great early writers in Hollywood. Sturges was born in 1898 in Chicago, Illinois. His mother, Mary Desti, was an Irish immigrant with dreams of stardom. When Preston was still an infant, she left his father and later pursued a career as a singer. In Paris, she became close friends with Isadora Duncan and traveled with Duncan’s dance company, leaving Preston in the care of others. These early years would have a profound effect on Sturges, who grew up to be the most popular satirist of the high society of his day.

At age 16, Sturges began managing the American branch of a cosmetics company his mother had started in Paris. While there, he invented the first kiss-proof lipstick, and while his passion for invention would never subside, he joined the U.S. Army to fight during World War I. After the war he returned to New York, where he married his first wife, Estelle. In 1927, she divorced him and he went to Chicago where his adoptive father, Solomon Sturges, lived. Spurred on by the satiric writings of a girlfriend, Sturges first began to write. While in Chicago he wrote two plays for Broadway. Though the first was only mildly received, the second, “STRICTLY DISHONORABLE”, was a hit.

He met and married Eleanor Hutton. The marriage was rocky, however, and within a short time it was annulled. He wrote his last play, “CHILD OF MANHATTAN” in 1932. Broke and broken-hearted, he decided to try Hollywood. Writing for the stage had prepared him well to create the witty dialogue that the movie industry needed. His was a new sort of comedy, one that replaced physical slapstick with cunning conversations.

After working on an adaptation of H.G. Wells’s “THE INVISIBLE MAN”, Sturges began to write a script of his own. “THE POWER AND THE GLORY”, written without any advance, brought Sturges the handsome sum of $17,500. Along with his payment came a percentage of the profits. Though common practice now, Sturges was one of the first writers to receive such an offer and it came with a great deal of attention and contention. Throughout the 30s, Sturges continued to write hit films including, “The Good Fairy” (1935), “DIAMOND JIM” (1935), and “IF I WERE KING” (1938). By the late 30s, he had become one of Hollywood’s most prolific and best paid writers.

Sturges, however, had been consistently dissatisfied with director’s interpretations of his work, and in 1939 convinced his employers, Paramount Pictures, to let him direct his own script. For the opportunity to direct, Sturges sold “THE GREAT MCGINTY”, his newest script, for $1. The film earned him an Oscar for Best Original Screenplay (the first time this award had been handed out). Sturges followed this by writing and directing a handful of other big hits including “CHRISTMAS IN JULY” (1940) and “THE LADY EVE” (1941). The success of these films set the precedent for other writers to become directors.

As Sturges’s career began to fade, however, he began drinking more heavily. His third wife left him in 1946 and took their son with her to Europe. In 1951, he married for the fourth and last time and produced two more sons. The restaurant he had opened years earlier shut down. After a flop and an unsuccessful partnership with Howard Hughes, Sturges slowly faded from the Hollywood scene.

Sturges spent the final years of his life in Europe and New York, writing and directing whenever he could find work. In New York, he lived at the Algonquin Hotel. There, he began work on his autobiography, “THE EVENTS LEADING UP TO MY DEATH.” He was only half-finished when he died of a heart attack at 60. Though his tenure in Hollywood was short and tempestuous, his legacy remains strong. Sturges will long be remembered for the complexity and sophistication he brought to some of the most inspired comedies ever made.