A multi lingual, multi talented entrepreneur, composer, artist and TV show host, Cathlyn can be best described as an All-in-One artist whose warm and friendly personality with background and knowledge of various cultures and cuisines appeal to a diverse audience of different nationalities and generations.

Dubbed Korean Food Ambassador by her fans, supporters and the Korean media, Cathlyns passion for promoting her native Korean foods called Hansik has led her to become one of the most recognized Korean celebrity chefs worldwide.

With her own Korean cooking show on public television called Cathlyns Korean Kitchen, currently in its 4th season, Cathlyn is also the host and producer of a new local TV show called Asian Voices featuring Asian arts, culture, music and entertainment in Southern California. As an artist and musician, Cathlyn also composes, arranges and performs all the background music for her cooking show.

Taught the traditional way of cooking from her grandmother and mother, Cathlyns uses unique cooking techniques and processes to develop her own style of traditional Korean recipes as well as fusion dishes. At age 13, Cathlyn also helped her parents with their catering business in Brunei for five years.

Born in Vietnam to Korean parents and having lived in Brunei and Seoul half her life, Cathlyn has learned to appreciate and is quite familiar with many different Asian foods, languages and cultures. Cathlyns passion for cooking and years of living and traveling throughout Asia and other European countries has allowed her to sample and cook various kinds of cuisines, while acquiring a sophisticated palate at an early age. To date, Cathlyn has developed over a thousand traditional Korean and fusion recipes. 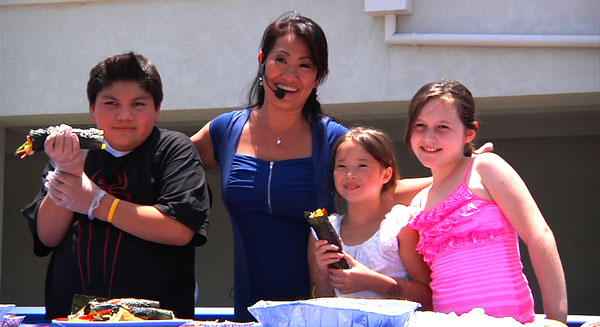