In May 2014, Martha Stewart's Cooking School won the James Beard Award for Outstanding Series, In-Studio or Location. MSLO’s expansive portfolio of television programming has been recognized over the years with 18 Emmy Awards including back-to-back Emmys for outstanding lifestyle show in 2010 and 2011. 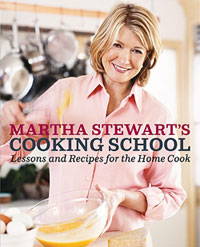 Raised in Nutley, New Jersey, in a family with six children, Martha developed her passion for cooking, gardening and homekeeping at an early age. Her mother taught her the basics of cooking, baking, canning, and sewing; her father introduced her to gardening at the age of three. Martha earned a bachelor’s degree in history and architectural history at Barnard College. Upon graduating, she became a stockbroker on Wall Street, where she gained her early business training. After moving to Westport, Connecticut, in 1972, she developed a catering business that showcased her remarkable talent and originality. Her unique visual presentation of food and the elegant recipes she created for her catered events were the basis for her first book, Entertaining, published in 1982. Entertaining was the first of 77 books, many of which are bestsellers, including Martha Stewart’s Baking Handbook, Martha Stewart’s Homekeeping Handbook and Martha Stewart’s Cooking School. The latter is the inspiration, Martha Stewart's Cooking School.