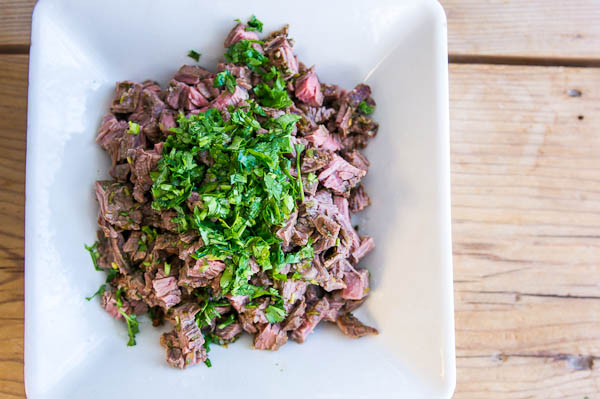 Whether its a tender juicy steak or a fall-off-the-bone tender rib, tenderness is often equated with the quality of the meat. But the texture of meat has a lot less to do with quality, and a lot more to do with how the meat is treated both before and after hitting the grill. To better understand this, lets look at the three main methods of tenderizing meat: mechanical, thermal, and enzymatic.

Mechanical tenderization involves pounding or piercing the meat with one of those medieval looking devices. The physical action is essentially pre-chewing the meat for you. Im generally not a big fan of this technique because youre not only breaking up the connective tissues that make meat tough; youre also breaking up the meat fibers themselves.

While mechanical tenderization is fine if youre trying to make your meat both thin and tender, such as for Chicken Fried Steak, or Wiener Schnitzel, its not so great for the grill.

If youve ever put a tough cut of meat in a slow cooker and opened it up later in the day to find a fork-tender pot roast, then youre already familiar with thermal tenderization. In this method, heat breaks down the connective tissues, leaving you with melt-in-your-mouth tender meat.

From 140 degrees F and up, the collagen surrounding muscle fibers start shrinking and force out the juices in the meat. If youve ever had a well-done steak, you know that this makes the meat both dry and tough. But beyond 160 degrees F, the collagen begins to break down into gelatin, which not only replaces some of the lost moisture, it surrounds the individual fibers with a tender gel that loosely holds the muscle fibers together. This is the stage at which meat is fork tender.

The heat can be dry heat (such as from a grill), or wet heat (such as in a braise), but it needs to be applied slowly, otherwise the outer surface of the meat will start burning before the collagen in the middle has fully broken down. Thermal tenderization is great for barbecuing ribs, brisket, or any other cut of meat with a lot of collagen, but it wont do much for fillet mignon or pork chop. Thats because those cuts dont have a ton of connective tissue to begin with, and you would never cook a steak or a chop long enough to breakdown the collagen they do contain.

The final method of tenderization and the one that most people are least familiar with is enzymatic tenderization. Enzymes are biological molecules that increase the rate of a reaction. In the case of dry-aging, natural enzymes found in the meat help break down the collagen over time. It results in a tender, flavorful piece of meat without altering the structure of the meat fibers.

The drawback is that it takes a long time (20+ days), and youll loose over 1/3 of the volume of meat because of moisture loss and the fact that youll need to trim the outer surfaces of the meat before cooking it.

Luckily there are other ways to achieve enzymatic tenderization. Many fruits such as kiwifruit, pineapple and papaya contain enzymes that have a tenderizing effect on meat. While it may not give you the same concentrated flavor that dry-aging will get you, fruit can be added to a marinade and it acts much faster. In the case of Bromelain, the enzyme found in pineapple, its so effective that it will turn your meat into mush if you let it marinate too long.

My favorite fruit for tenderizing is kiwifruit because the Actinidin contained in kiwifruit is effective in breaking down connective tissues without turning the meat into mush. It also has a fairly neutral flavor that wont significantly affect the taste of your marinade. Best of all, its easier to find, and cheaper than papaya (at least in my part of the world).

To use it, just add a tablespoon or two of kiwifruit puree into every cup of marinade. The tenderizing effect will depend on how much kiwifruit you add and how long you let it soak, but Ive let meat sit in a kiwifruit infused marinade for up to a week without any negative effects on the texture of the meat.