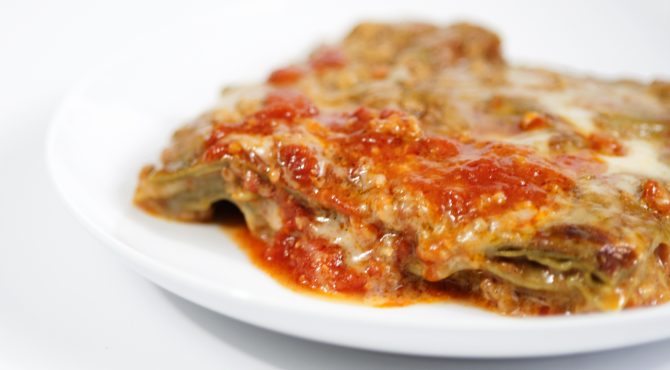 I am always telling you not to add oil to the water when you cook pasta because it will reduce the adherence of sauce to the pasta. Cooking long, flat pasta—like these lasagna noodles—is the exception. They have a tendency to stick together when they cook; the oil will help prevent that. Inevitably, some noodles will break. Save the pieces, they will come in handy to patch the layers of lasagna.

You’ll notice in the meat sauce recipe that the final consistency of the sauce should be fairly dense. Following that pattern, I suggest you drain the ricotta first to remove a lot of the moisture. Removing excess moisture from the ingredients will result in a finished lasagna that is more intense in flavor.

You may assemble the lasagna completely up to a day before you serve it, but don’t cook it until the day you plan to serve it. Lasagna tastes better and is easier to cut if it is allowed to stand about an hour after it is removed from the oven. It will retain enough heat to serve as is or, if you prefer, pop it back in the oven for 10 to 15 minutes. My favorite way to serve lasagna is to bake it and let it stand 3 to 4 hours. Cut the lasagna into portions, rewarm it in the oven.