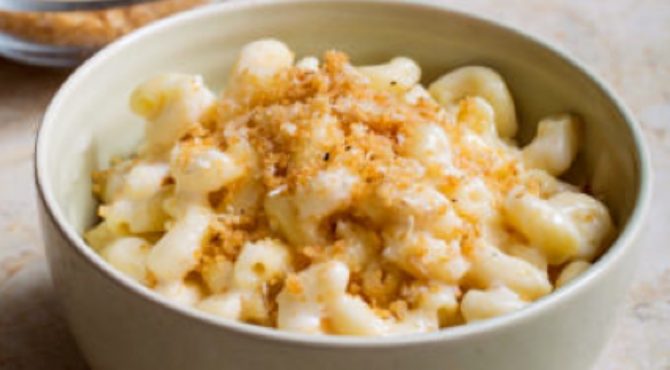 This simple stovetop macaroni and cheese recipe is from America's Test Kitchen.

Barilla makes our favorite elbow macaroni. Because the macaroni is cooked in a measured amount of liquid, we don’t recommend using different shapes or sizes of pasta. Use a 4-ounce block of American cheese from the deli counter rather than presliced cheese. Inspired by an innovative macaroni and cheese recipe that calls for adding sodium citrate, an emulsifying salt, to cheese to keep it smooth when heated (instead of adding flour to make a béchamel), we based our sauce on American cheese, which contains a similar ingredient. Because American cheese has plenty of emulsifier but not a lot of flavor, we combined it with more-flavorful extra-sharp cheddar. A bit of mustard and cayenne pepper added piquancy. We cooked the macaroni in a smaller-than-usual amount of water (along with some milk), so we didn’t have to drain it; the liquid that was left after the elbows were hydrated was just enough to form the base of the sauce. Rather than bake the mac and cheese, we sprinkled crunchy, cheesy toasted panko bread crumbs on top. Our simplified mac and cheese recipe takes only about 20 minutes from start to finish.
Learn More Providing Support for pbs.org