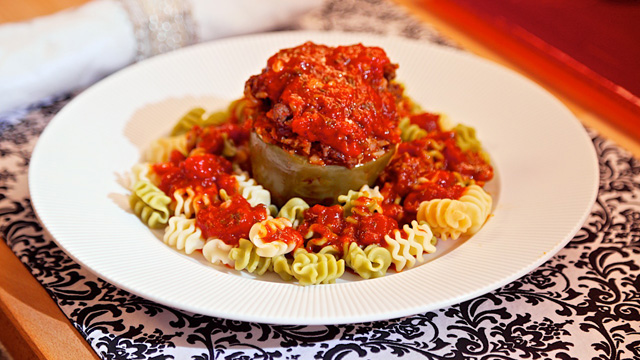 "I first made these delicious peppers for a New Years Eve party and they were a huge hit! Featuring a meaty-tasting seitan and hearty brown rice stuffing, these beautiful bells satiate omnivores and vegans alike. Ready for the oven in under 20 minutes, these six-ingredient wonders are equally ideal for a holiday party or weeknight supper. " - Laura Theodore

You may use unflavored, ground seitan in place of the Italian flavored variety. If using unflavored seitan, add an additional heaping teaspoon of all-purpose seasoning or Italian seasoning blend to the filling mixture before stuffing the peppers.

You may pre-cook the rice up to 48 hours ahead of making this recipe. Store it tightly covered in the refrigerator until use.