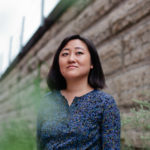 Our December 2020 pick for Now Read This, the PBS NewsHour’s book club with The New York Times, is Ling Ma’s “Severance.” Become a member of the Now Read This book club by joining our Facebook group, or by signing up to our newsletter. Learn more about the book club here.

When writing “Severance,” author Ling Ma drew inspiration from various sources, including several films. The author shared more details about three of them, and how they informed her novel, below.

“The Conversation” follows Harry Caul, a wiretapper who suspects that one of his recordings, of a conversation between an unaware couple, may be used in a murder plot. Torn between doing his job and intervening, he begins to suspect that he himself is being surveilled. More of a mood piece than a straight up thriller, this 1974 film contains one of my favorite sequences: That of an after-hours work party held in Harry’s industrial loft office, following a security convention of fellow wiretappers and investigators for hire. The camera moves through the scene casually, like a party attendant, eventually drifting back to Harry as he defers questions from his peers, who cajole him to spill his techniques and trade secrets. That mix of work obligation, half enjoyment, and alienation feels as close to any office party as I’ve ever attended. In the morning, he wakes up to discover his office pilfered of valuable items.

“Days of Heaven” is a dreamy period romance set in early 1900s Texas. The plot involves a love triangle between a wealthy farmer and a couple who work on his land. While it’s not my favorite Terrence Malick film, the beautifully naturalistic voiceover, improvised by then-teen actor Linda Manz, is both poetic and grounded, naïve and wise. When I first began writing “Severance”, one reference point was what a Manz-like voiceover for a zombie apocalyptic flick directed by Terrence Malick would sound like. This was maybe too ridiculous (?) to sustain beyond the prologue, but it was one idea that springboarded me into the novel.

This 2000 film by Taiwanese director Edward Yang chronicles a middle-class family during a transformative period. The events that make up the plot — affairs, multiple deaths, a violent crime, business deals gone awry — belong in a melodrama, but their portrayal here is the opposite of melodramatic. Life-altering incidents take place on the plane of everyday existence, enfolded into the sweep of job, school, dinner, and routine. The characters, filmed from an unsentimental middle distance, process their feelings as if in real time — which is to say, slowly, quietly, uncertainly. This description makes “Yi Yi” sound boring, but then how to explain that this is one of the most transcendent films I’ve never seen? I don’t have an immediate answer, but it’s why “Yi Yi” fascinates me, how it achieves poetry with seemingly ordinary, unremarkable scaffolding. That, and I just love looking at Yang’s shots of Taipei cityscape, which remind me so much of Fujian, located just across the strait.