Our December 2020 pick for Now Read This, the PBS NewsHour’s book club with The New York Times, is Ling Ma’s “Severance,” a satirical novel that takes place during a global pandemic.

“Severance” follows Candace Chen, a millennial with a corporate job in book publishing who finds herself among the last survivors of a devastating virus in a largely empty New York City. 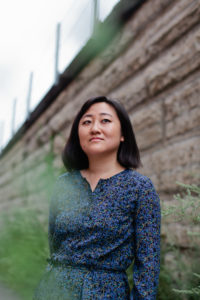 “Set against the backdrop of a catastrophic illness — Shen Fever, which results in a ‘fatal loss of consciousness’ — the novel draws a circle around the lives of Candace’s office cohort and the fever-stricken,” reviewer Antonia Hitchens wrote in The New York Times when the book was first published in 2018. “But laced within its dystopian narrative,” she added, “is an encapsulation of a first-generation immigrant’s nostalgia for New York, a place where, as Candace notes, ‘most people have already lived, in some sense, in the public imagination, before they ever arrive.'”

Ma weaves Candace’s journey through a post-apocalyptic America with flashbacks of her youth spent partly in China, as she reflects on how her late immigrant parents shaped her.

Ma, who is now a professor in the English department at the University of Chicago, began writing “Severance” during the final months of working at an office job while the company was shuttering its location. While it was originally intended to be a short story, she soon realized “there was more to excavate” than she realized, she recently told the PBS NewsHour.

While “Severance” feels like a particularly relevant pick amid the COVID-19 pandemic, Ma’s book also grapples with enduring themes of family, immigration and identity while offering a pointed critique of modern-day office life and consumerism.

“Severance” received the Kirkus Prize, the Young Lions Fiction Award, and was a 2018 New York Times notable book. Ma will answer reader questions about “Severance” at the end of the month. We hope you’ll read along.