4-year-old character’s ‘big, beautiful’ Afro has the attention of the internet

Watching a black man attempt to do his daughter’s hair has brought a flood of recognition online, compelling people to pledge more than $75,000 in less than a week to create a Pixar-style animated short about it.

“Hair Love” stars a 4-year-old girl named Zuri who is getting ready for a big day while her mother is away for an event, forcing her father to step up. Matthew Cherry, a former professional football player turned filmmaker with a prolific Twitter presence, launched a Kickstarter to bring Zuri and her father Stephen to life on Monday. The project has resonated with so many people that it has already attracted more than four times the amount he has raised for past film projects.

He reached his goal of $75,000 Saturday afternoon to collaborate with with some of the top black artists in animation and others to create a traditional two-dimensional, 5-minute film. But if he raises $100,000 or more by Aug. 9, he’ll upgrade to a Pixar-style short.

The NewsHour Weekend talked to Cherry about the inspiration behind the project, how people are reacting to it and why it is getting so much attention.

How did you come up with the premise?

I just came across a lot of these viral videos of fathers doing their daughter’s hair, especially black dads doing it. And it’s kind of interesting because on one hand I think it’s really dope, but I also think it’s kind of sad because obviously these videos are cute and they’re touching and heartwarming, which is why they’re getting a lot of attention, but it’s also sad because I think the main reason a lot of people are sharing these videos is because they see it as an anomaly.

It’s not something that they’re used to seeing. I’m just trying to normalize that because everybody that I know who’s a father, at some point you’re going to have to do your kid’s head even if the wife does it all the time because things come up.

Also, there are all these little articles that you see, people really try to play it up like black men aren’t involved in their kids’ lives and it’s really not that case at all. I mean obviously you have people who aren’t in their kids’ lives, but I feel more often than not we are. That was the big thing about wanting to focus it around a daughter and a father.

Have you ever done a little girl’s hair?

I actually have – literally one time in my life and it was pretty amazing. I actually did a great job. It was one of my nieces. She was the same age as the character in the film, she was 4. It was actually a challenge. This was kind of before these YouTube video tutorials and everything. I was challenged with whether or not I could do it. It was actually a bet and I won. I did a great job. I was younger, so it was like $20, but I thought that was the best thing ever.

How did you decide Stephen would have dreads?

“People really try to play it up like black men aren’t involved in their kids’ lives and it’s really not that case at all.”

I’m sure it’s happened before, but there aren’t many instances that I can remember seeing an African American character with dreadlocks in one of these animated pieces. I thought it’d be really cool because I used to have locs, a lot of people that I know had them or are transitioning into them, and it’s just a really ethnically specific hairstyle that I think would drive home the point about representation.

What about the type of hair Zuri would have?

My biggest thing was that I definitely wanted it to be curly and the hair is going to be a work in progress because what looks good in real life may not work the same in an animated world, so we just got to come to a happy medium to something that’s functional in an animated world but also something that’s realistic and is kind of an authentic depiction of a young African American girl with natural hair that’s curly. You know, a nice little fro.

You’ve had quite a response.

The great thing is that I think people are really connecting it with their own experiences, like when the first time their dad did their hair, or something about their hair journey. I got an incredible email from a woman who said she saw our campaign and she cried because her husband had passed away not too long ago and she said it really reminded her of the time when he did her daughter’s hair. It’s just stuff like that, we’ve been getting crazy amounts of images and emails of people connecting to it.

I just want to say, this speaks to me and def backing it. When I met my hubby,he was a single father….

Why did you want this to be your first animation?

I just really love animated projects. Any time a new Disney or Pixar movie comes out or Sony Picture Animations or Fox or whatever, I’m always there, like opening day, to the point where a lot of times I’m the only adult there that doesn’t have kids. You feel a little weird being a grown man on opening night at Monsters University or whatever. But I just love their stories because I feel like their stories are more universal. I always wanted to get into that world, but I actually can’t draw at all. 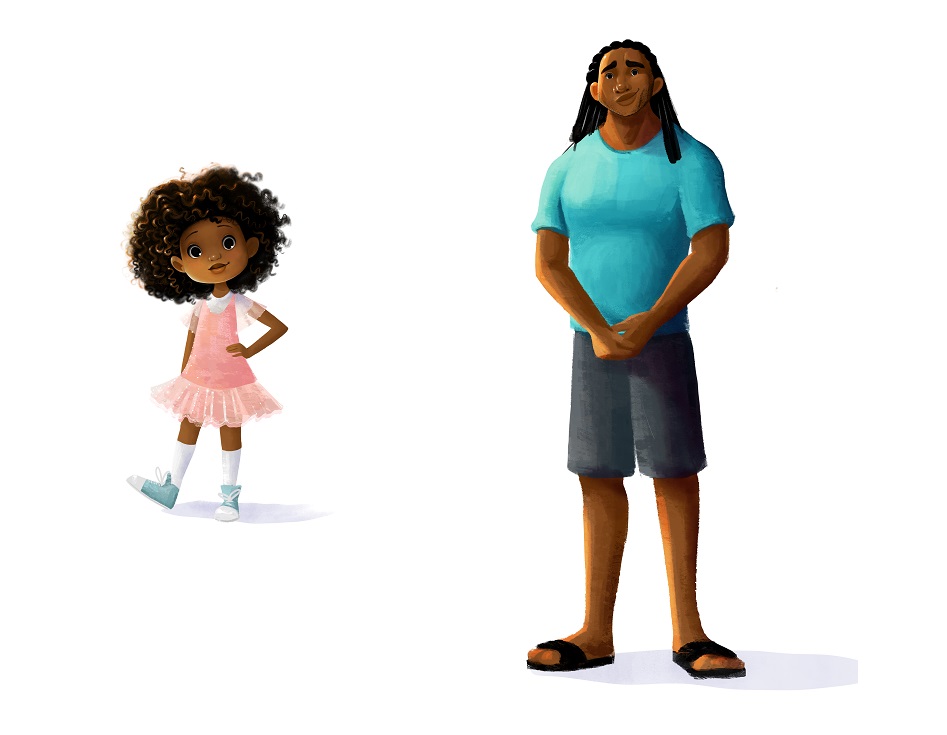 Illustrations of Stephen and Zuri, drawn by Vashti Harrison. Courtesy of Hair Love

How well do animated films do with diversity?

I think animated films can always do a better job of having more diverse representations of people of color. For me it goes deep because think about this: In society we’re throwing all these images, you know magazine covers where everyone is slim, blonde hair, blue eyes, you turn on your TV screen, everybody looks a certain kind of way and when you’re a little kid and you don’t see yourself represented. That starts to affect you. And when you look in the mirror and you don’t see people that look like you represented, you start to think you’re less than.

If one little girl sees this project and sees that this little girl has a big old beautiful Afro and brown skin and looks like her and is confident in how she looks and her hair is a character too, moving around and breaking rubber bands and everything else, like her hair does, they’ll feel more confident about their own hair too and take more pride in it. That was the biggest thing. When I have a daughter, I want her to be able to look at this character and feel like she’s represented and that’s someone she can look up to and grow up with.

It’s resonated with a lot of Zuris on Twitter.

What message are you trying to send?

I just really want to put a piece of content out into the world that men and women, boys and girls alike could relate to and see themselves in. It’s a project to me that I feel is super universal. I don’t feel you need to be black or a girl or a black man with dreads with a daughter, to me this project if for anybody who has ever loved somebody unconditionally and was asked to do something that they’ve never done before and tried to figure it out. And hilarity ensued. 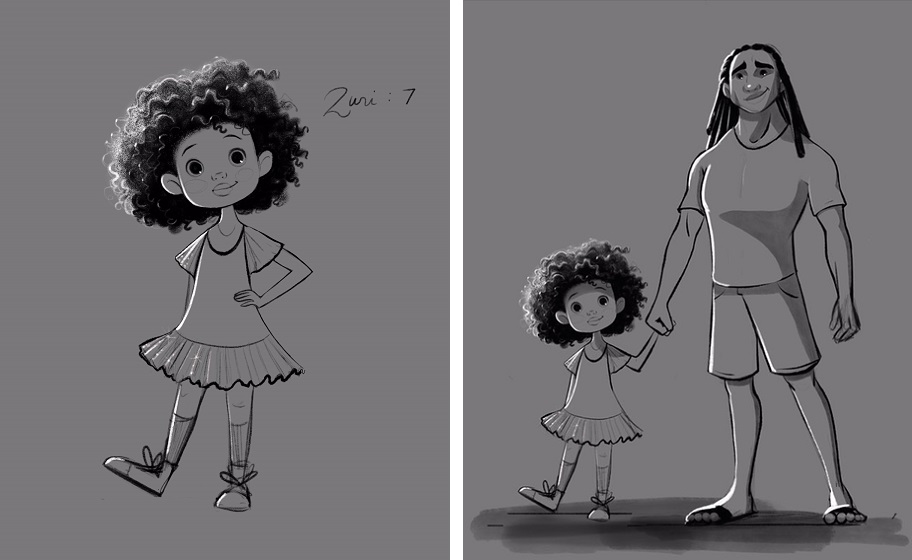 Illustrations of Stephen and Zuri, drawn by Vashti Harrison. Courtesy of Hair Love

If you love somebody you’re going to do anything you can for them. In our short, Zuri’s mother is away and she really wants her hair done because it’s a really special day for her. And the dad has to figure it out. He tries his own techniques that he thinks he knows on his own, because you know guys tend to be a little hard-headed and think they can figure it all out and don’t want to ask for directions and stuff. And then he ends up checking out a couple of these natural hair vloggers online. I think we are trying to be really representative and also authentic in our specificity in trying to deal with these characters in this world of black natural hair and father-daughter relationships.

This interview has been edited for clarity and brevity.