Almost a year ago, Spanish investigators began searching the Convent of the Barefoot Trinitarians, a 17th century convent that is still home to a dozen nuns, for the burial ground for “Don Quixote” author Miguel de Cervantes.

On Tuesday, the scientists announced that, deep under the ground of the convent, they found remains that they believe belong to the celebrated writer, though they may never be able to guarantee the match.

Equipped with a team of 30 researchers, infrared cameras, 3-D scanners and ground-penetrating radar, the investigators found the bygone crypt, buried about 50 inches under the convent.

Inside, they discovered the bones they believe belonged to Cervantes’ wife and others known to be buried with Spain’s “Prince of Letters.” However, the bones were badly damaged and incredibly fragile, further complicating the quest to identify them. 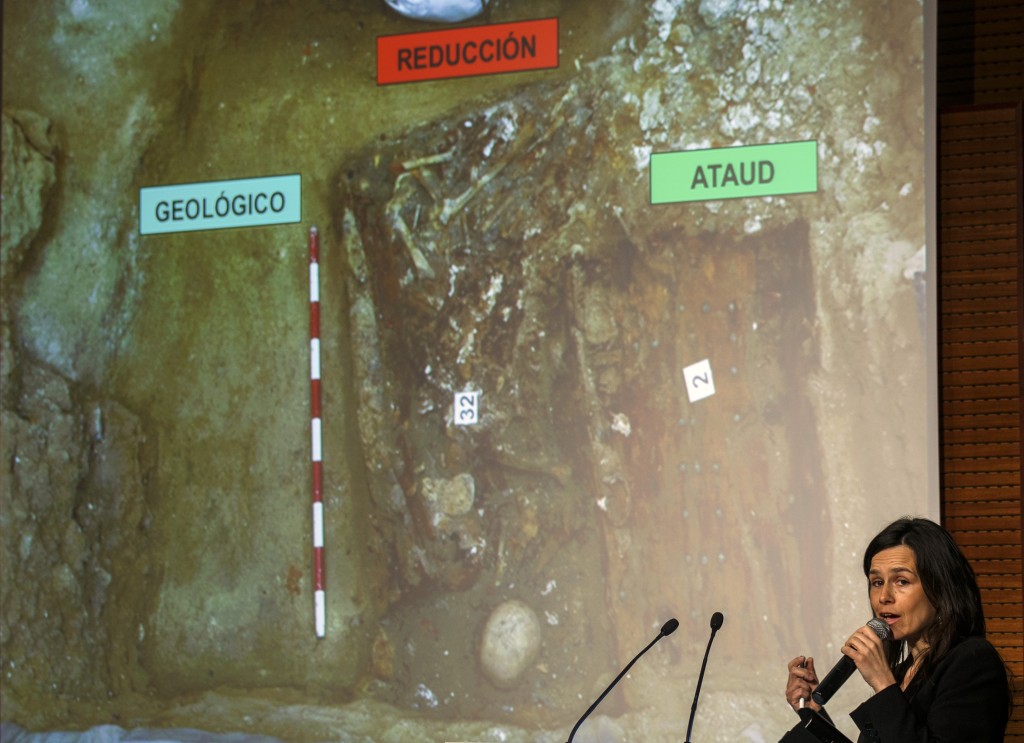 Forensic anthropologist Almudena Garcia speaks about the search of the remains of Spanish writer Miguel de Cervantes, in front of a picture of its probable location, in Madrid, Tuesday. Photo by Andrea Comas/Reuters

Cervantes, who died nearly 400 years ago, is widely considered to have written the first modern novel, “Don Quixote.” The first part was published in 1605, followed by what was written as a sequel 10 years later.

The story follows the adventures of a Don Quixote, an older man obsessed with chivalry who has read too many novels about being a knight and goes on a quest to become one, accompanied by his squire, Sancho Panza. 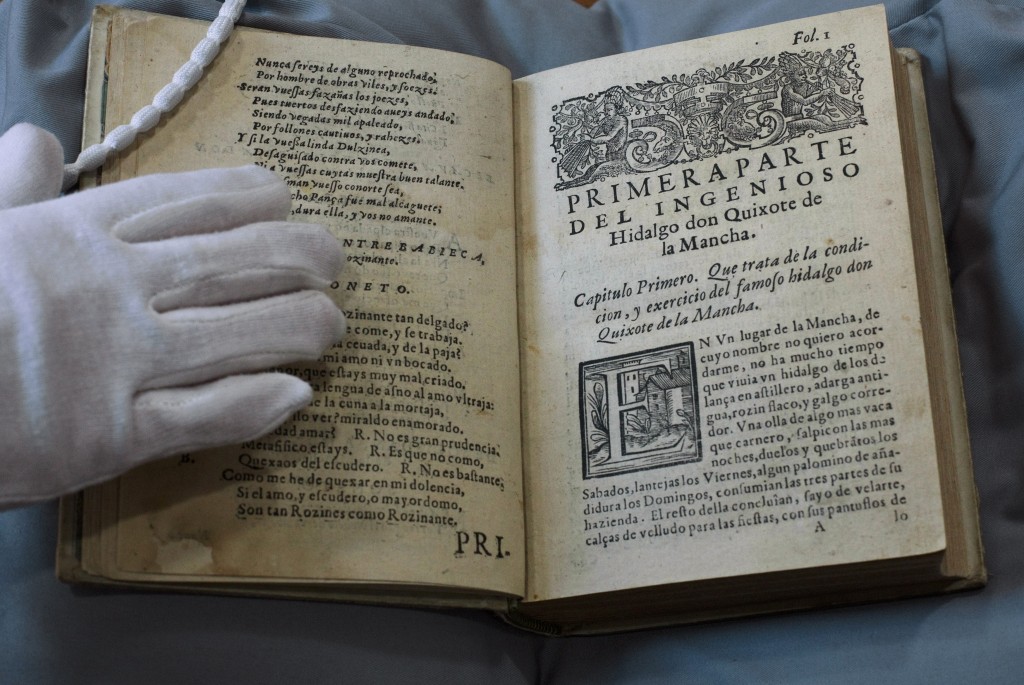 An edition dated in 1605 of Miguel de Cervantes’ famous novel “Don Quixote” is shown by a librarian at the National Library in Madrid March 10, 2014. Photo by Sergio Perez/Reuters

Bruce Burningham is the editor of the Bulletin of the Cervantes Society of America and the Chair of the Department of Languages, Literatures and Cultures at Illinois State University. He told Art Beat that the novel, which plays with notions of history and authenticity, can also be seen as a work of literary criticism.

“[Cervantes] is commenting on the various literary genres that were popular during his day by incorporating them into the story and then tweaking or drawing attention to the conventions,” said Burningham. “So you take a look at these genres from a fresh perspective.”

The protagonist’s idealistic and impractical nature gave us the word “quixotic” and the expression “tilting at windmills,” or taking on imaginary adversaries, which is derived from a scene in which Don Quixote jousts with the inanimate structures. 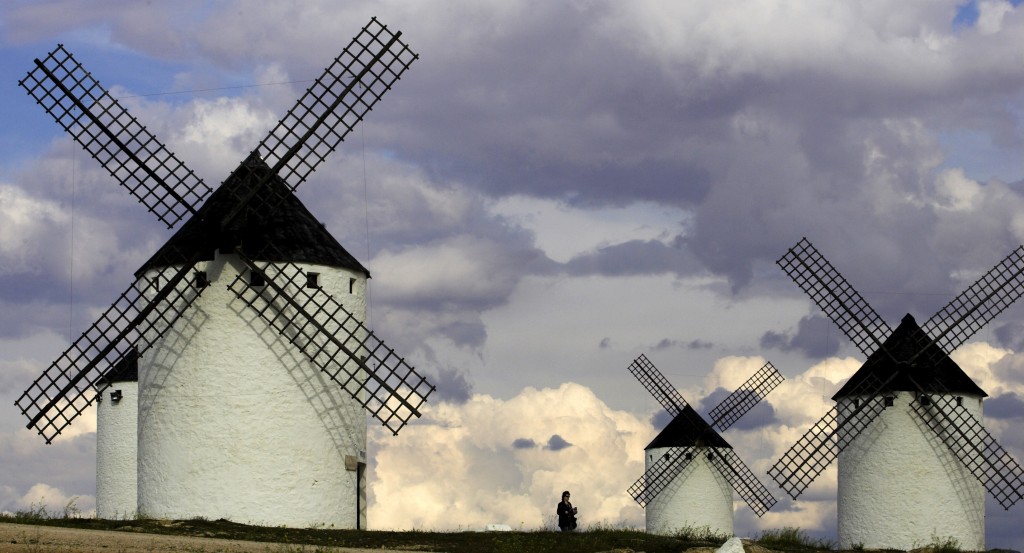 Tourists visit the famous ancient windmills in the village of Campo de Criptana at the Castilla-La Mancha region in central Spain April 16, 2006. La Mancha windmills are part of the story of Don Quixote, Spain’s most famous literary character. Photo by Victor Fraile/Reuters

Cervantes was not a writer until later in his life. He was in the armed services and participated in the famous 1571 Battle of Lepanto, where he was injured and lost of the use of his left hand.

Four years later, he was captured by Moorish pirates, who believed that he was more important than he really was thanks to letters of recommendation that he was carrying. Cervantes was held captive for five years until the Convent of the Barefoot Trinitarians helped pay his ransom.

He didn’t start writing until after he was denied from joining the Spanish conquest to the new world and had spent stints in prison for being a tax collector who didn’t properly balance his books. But his original writings — largely plays, then poetry and pastoral novels — didn’t garner much success. 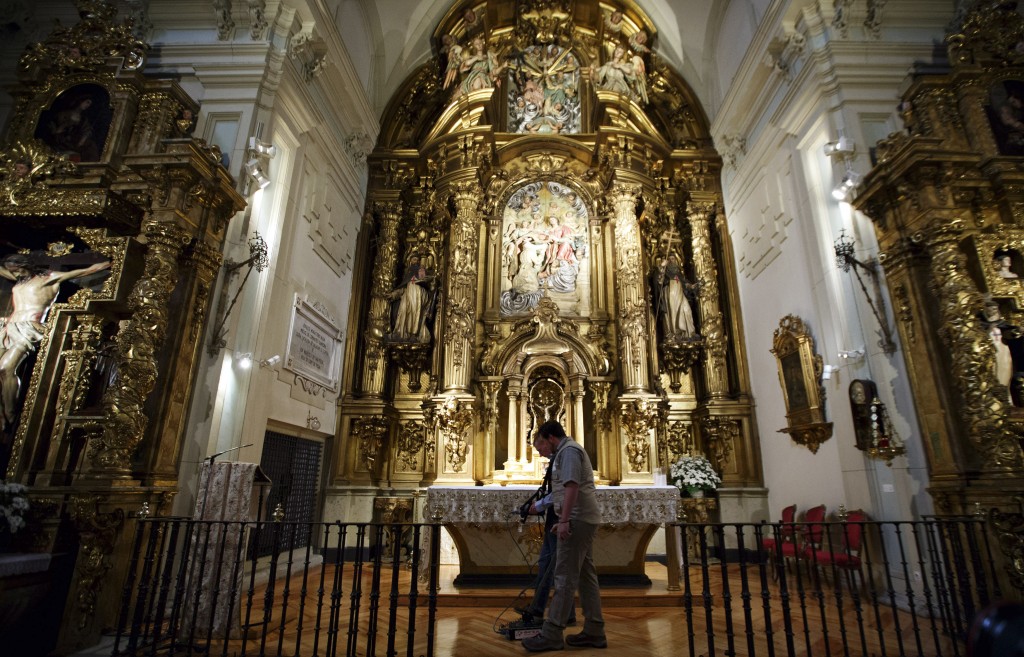 Specialists use ground-penetrating radar to peer into the sub-soil beneath Trinitarian convent in a quest to find the remains of Spanish novelist Miguel de Cervantes, in central Madrid April 28, 2014. Photo by Sergio Perez/Reuters

In 1605, however, his first installment of “Don Quixote” became a bestseller across Europe and was translated into English, German and French.

Cervantes died the same week as William Shakespeare in 1616. He had requested to be buried at the convent where he was found. Luis Avial, the georadar expert on the team, said at a news conference on Tuesday that Cervantes’ remains will be reburied at the same convent, after a tomb has been built.

“Cervantes asked to be buried there and there he should stay,” said Avial. 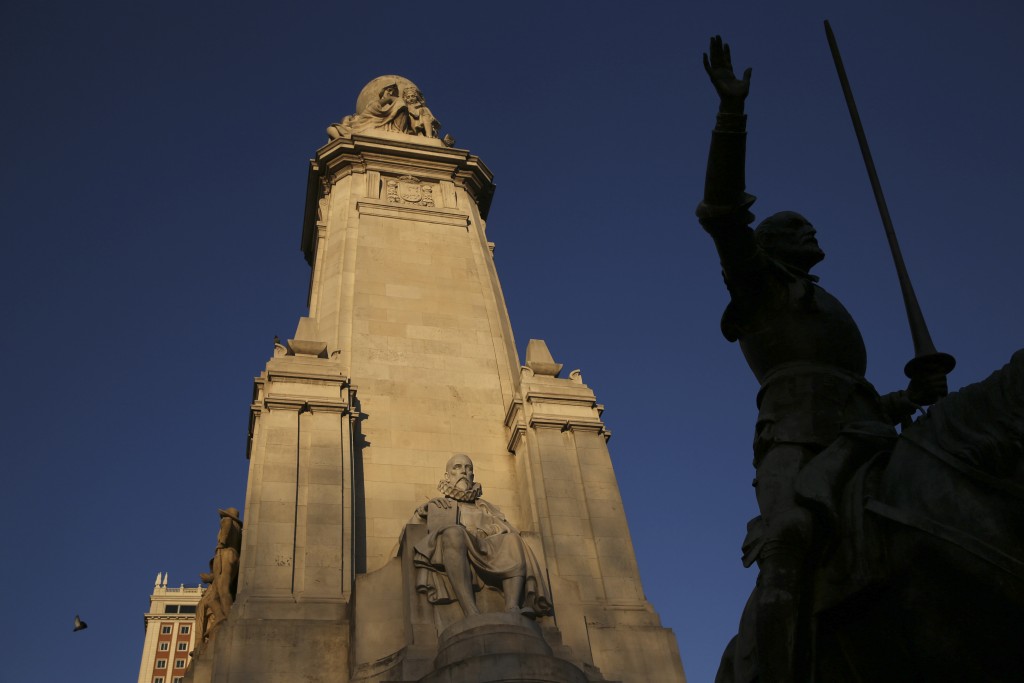 The statue of Miguel de Cervantes is seen next to the statue of one of his most famous characters, Don Quixote, at Plaza de Espana square in central Madrid. Photo by Susana Vera/Reuters

Burningham believes Cervantes will inspire literary-minded people to make a pilgrimage to the burial site.

“These major literary figures — Shakespeare, Cervantes, Dante and others — have become to us what us what medieval saints were to the people 500 years ago or 1000 years ago. Some famous religious figure would die and be sainted and this local church would keep a physical relic of that person’s body,” said Burningham. “Part of the excitement of finding his remains is it’s a way of creating a place that one can stand … it creates a connection.

Madrid mayor Ana Botella said authorities are looking into opening the site to visitors, a potential boost in tourism. Next year, for the first time in centuries, the crypt will be open to the public to help mark the 400th anniversary of Cervantes’ death.

“We’ve contributed a little bit to our history today,” said Botella on Tuesday.

Editor’s note: This article originally stated that the second installment of “Don Quixote” was published 15 years after the first, not 10. It was updated on March 18.

Left: Experts in search of Cervantes' burial site examine remains found at a convent in Madrid.