Throwing a flawless event is a science and Patricia Altschul has cracked the formula. A celebrated hostess, Altschul reveals her fail-safe tips and tricks in her new book “The Art of the Southern Charm.”

“It’s a blueprint for living a fabulous life, Southern style, because I believe Southerners do [entertaining and hospitality] better,” she said. Altschul, a native of Richmond, Virginia, began hosting dinner parties for friends when she was a newlywed living in Washington, D.C. They were casual affairs and couples would bring dishes to contribute to cut down on costs. 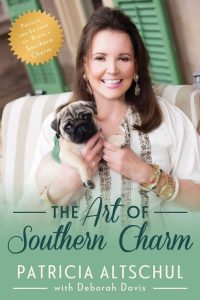 She now lives in Charleston, South Carolina and is a cast member on Bravo’s hit reality television show, “Southern Charm,” which follows Altschul and eight others, including her son Whitney, as they navigate life in the Holy City. Her punctiliously planned parties are featured regularly on the program.

“Patricia is on a whole ‘nother level,” says Cameran Eubanks Wimberly, a friend and fellow “Southern Charm” cast member. “I have never been to anything as nice as a party that Patricia has thrown.”

Eubanks Wimberly said her demeanor immediately puts guests at ease. “She is very calm, very collected, and she makes everybody, no matter who you are, feel extremely welcome in her home, which is wonderful. She doesn’t care where you’re from … as long as you’re a good, fun person, she’ll hang with you.”

Altschul makes sure all guests are properly introduced when they arrive so people are more friends than strangers by the time dinner is served.

“Try to get everyone together rather than spread out because the cozier you are, the more comfortable and intimate people feel. You can purposefully seat people together who you think will get along. After a drink or two and people are chatting, it’s time to move into the dining room. By then, they’re loosened up.”

Some of the keys to Altschul’s successful hosting are in her wardrobe. She likes wearing caftans, especially when entertaining at home, because of their comfort and versatility. She has recently started her own line of custom caftans that offer pet owners bohemian-style gowns printed with their four-legged friend’s picture.

While preparing for parties, Altschul likes to have a “dressing drink.”

“I have a dressing drink for two reasons. If I’m entertaining at the house, I really don’t have time to sit and have a nice cocktail because I’ll be getting up and greeting people, showing them around, or introducing them, and I don’t want to be doing it holding onto a cocktail. If I’m attending an event, I know I’m not going to get what I want where I’m going — and I like my martini.”

Altschul delves into proper guest etiquette in the book as well. Among her strict rules: No cell phones during parties.

“People put them on the table like an accessory or part of the dinner service. I have what I call ‘phone shaming,’” Altschul said. “If I see a phone I say ‘no phones, put them away, they’re not allowed.’” She is also a stickler for RSVPs. “Its definitive — you must RSVP,” she said. Staying after a party has ended is another pet peeve of hers. “It’s a constraint on everyone’s time and the host or hostess is probably tired.”

To ace hosting duties at your next get-together, Altschul suggests the following tips:

No Southern soiree would be complete without both food and liquor. Below are two of Altschul’s tried and true recipes that will bring the South to your table, no matter which side of the Mason-Dixon you call home.

Ham biscuits are a staple at any Altschul party. Below is her recipe for classic Southern buttermilk biscuits.

Preheat oven to 450 degrees. Mix flour, baking powder, baking soda, and salt in a bowl. Add Crisco and butter until batter reaches a crumbly consistency. Add buttermilk and stir until dough forms. Place the dough on a floured surface and dust with flour. Fold the dough into itself several times and form a round that’s about an inch thick. Use a biscuit cutter to cut individual biscuits. Line up on a cookie sheet. Bake fifteen to twenty minutes, until golden. When the biscuits have cooled, slice them open, and fill with ham.

Punch is a great option if you’re hosting a crowd. Since this drink is strong, Altschul suggests serving it in punch cups, which are smaller than traditional glasses.

Mix alcohol with lemon juice and sugar and let sit in the refrigerator for 24 hours to mellow it out. When ready to serve, pour over a block of ice in a punch bowl and top with thinly cut slices of orange and small strawberries.

For more entertaining advice, etiquette tips, and recipes, check out “The Art of the Southern Charm” and catch Altschul “Southern Charm” every Monday at 9 p.m. on Bravo.