This Salvadoran poet writes to humanize the immigrant story

Almost 12 years ago, a sea of immigrants and their supporters took to the streets in cities across the United States for a series of marches, a response to a Republican proposal to toughen immigration policies and wall off one-third of the U.S.-Mexico border. Some 500,000 people gathered in downtown Los Angeles on March 25, 2006, for a rally that mirrored others in Chicago, New York and Phoenix held earlier that month. Churches, community groups and Spanish-language radio DJs promoted the marches, asking people to show up in white T-shirts as a sign of peace while demanding immigration reform.

Javier Zamora, a poet and Salvadoran immigrant who resides in Northern California, was a teenager at the time. While he and his parents participated in a boycott by skipping work and school, they did not join the active uprising that formed the biggest immigrant rights marches in U.S. history.

“We were afraid to go march outside,” he said. “And that, for me, has always left a weird taste in my mouth.”

Zamora began writing poetry a few months later, at the age of 17, in response to these mobilizations and a wave of emboldened young immigrants “coming out” as undocumented. But his first drafts were more so a reaction to his childhood and shrouded memories of El Salvador: when the civil war tore his family apart; when his father, and later his mother, left him as a toddler to come to the U.S.; and when he later joined them, traveling unaccompanied across the U.S.-Mexico border. 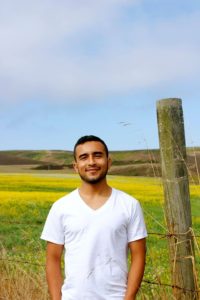 He recalls these experiences in his debut poetry collection, “Unaccompanied,” published by Copper Canyon Press in September. Writing his first poems in 2007, he said, felt like being in a vacuum. No one was talking about these things.

Last Monday, the Trump administration announced it would revoke the protections, known as Temporary Protected Status, that have allowed nearly 200,000 Salvadoran immigrants, including Zamora and his parents, to remain in this country legally.

Salvadorans received permission to be in the U.S. almost two decades ago after a pair of devastating earthquakes struck their country. Arguing that the original conditions that justified the temporary humanitarian program no longer exist, the administration has said that they must return home or stay in the U.S. illegally.

Zamora came to the United States at the age of 9 to join his parents in Marin County, California. Before that, he grew up in a town called La Herradura, living for the most part with his grandparents in the aftermath of the Salvadoran civil war. Thousands were tortured, killed or “disappeared” during the 1980s conflict that pitted government forces against leftist guerrilla groups, with much of the violence attributed to the U.S-backed Salvadoran military.

It was always a fear, said Zamora, that a new administration could end the program and force them to go back to a place still mired in violence.

Zamora’s poems piece together the strained but inherent connection between the U.S. and El Salvador, and the trauma that remains. “Stupid Salvador, you see our black bags, our empty homes, / our fear to say: the war has never stopped, and still you lie,” he writes in the poem “El Salvador.”

His father, who came to the U.S. to escape the violence of the war, says he will never return to his native country. But Zamora and his family’s future is uncertain now that the Trump administration said TPS for El Salvador will end in September 2019.

It was always a fear, said Zamora, that a new administration could end the program and force them to go back to a place still mired in violence. “Every day cops and gangsters pick at you / with their metallic beaks, and presidents, guilty,” he writes.

“You ask anybody from El Salvador and they will tell you that they are more scared now than they were during the war,” he said. “And that is not a good place to return to.”

Zamora wrote “Unaccompanied” wishing people would start talking about these things. And looking back at those early immigrant protests, he realizes some things have changed. People are more aware of what TPS is, and he remains hopeful that forthcoming conversations about immigration reform will sympathize with more than just the narratives of the young undocumented immigrants who were brought here as children.

At a moment when President Donald Trump is being accused of making racist comments in describing Haiti and some African countries, Zamora’s poems conjure up emotions of love, hurt, resentment and longing that aim to push the U.S. immigrant narrative forward, in place of stereotypes.

“Can you see us? Can you humanize us?” he said.

Salvador, if I return on a summer day, so humid my thumb
will clean your beard of  salt, and if  I touch your volcanic face,

stain you with pollen. Every day cops and gangsters pick at you
with their metallic beaks, and presidents, guilty.

Dad swears he’ll never return, Mom wants to see her mom,
and in the news: black bags, more and more of us leave.

Parents say: don’t go; you have tattoos. It’s the law; you don’t know
what law means there. ¿But what do they know? We don’t

Stupid Salvador, you see our black bags, our empty homes,
our fear to say: the war has never stopped, and still you lie

and say: I’m fine, I’m fine, but if  I don’t brush Abuelita’s hair,
wash her pots and pans, I cry. Tonight, how I wish

you made it easier to love you, Salvador. Make it easier
to never have to risk our lives.

Javier Zamora was born in La Herradura, El Salvador and immigrated to the United States at the age of 9. He earned a BA at University of California, Berkeley and an MFA at New York University. In 2011, Zamora published a chapbook called “Nueve Años Inmigrantes.” He is currently a 2016–2018 Wallace Stegner Fellow at Stanford University, and holds fellowships from CantoMundo, Colgate University, the Lannan Foundation, MacDowell, the National Endowment for the Arts, the Poetry Foundation, and Yaddo. “Unaccompanied,” Copper Canyon Press Sept. 2017, is his first collection.

Left: A Salvadoran father carries his son while trying to board a train heading to the Mexican-U.S. border in 2015. File Photo by REUTERS/Edgard Garrido