At the Met Gala, ‘extra’ feathers, bling and Susan Sontag

NEW YORK (AP) — The cocktail bar was shutting down, and guests were being encouraged to commence the elegant trek to dinner through the majestic halls of the Metropolitan Museum of Art.

But Joan Collins had just swept in, channeling her famous “Dynasty” character, Alexis, in a tiered gown of fluffy white feathers and gobs of blinding diamonds. And Alexis wanted a glass of wine.

“I’m having a great time,” Collins said of her first Met Gala. “I’d be even better if I had a drink.”

The sartorial theme of this year’s gala was “camp”— not summer camp, but the aesthetic of camp and its influence on fashion, as explored in the museum’s new exhibit, “Camp: Notes on Fashion.” It wasn’t an easy theme to grasp; the instructions for guests were to dress with “studied triviality.”

But while the results varied hugely — from Katy Perry dressing as an elaborate candlelit chandelier (and later, a cheeseburger) to Kanye West wearing a simple black jacket that cost about $40 — there were indeed some slam-dunk “camp” moments, and one was Collins. 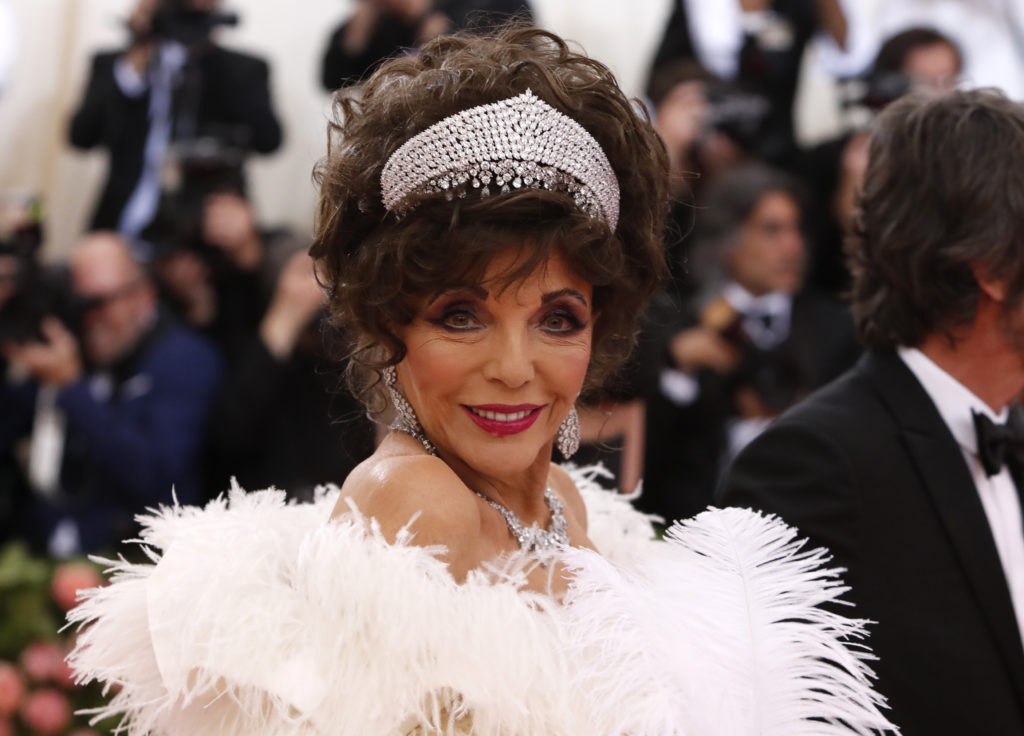 Joan Collins at the Met Gala in New York City, May 6, 2019. Photo by REUTERS/Andrew Kelly

“I’m a Met Ball virgin,” she said, “so I thought I would come as my character, Alexis Morell Carrington Colby Dexter Rowan, and embrace it,” she said. “Everybody ALWAYS said she was camp.”

But even Collins, in her glistening diamond tiara, could not out-camp perhaps the champion camp-er of all time, Lady Gaga. The pop star and actress, a co-chair of the gala, put on a virtual burlesque show on the red carpet, slowly shedding a series of three outfits until she was left vamping in black lingerie.

Celine Dion confessed that “even now, I honestly don’t really understand what camp is.”

Inside, Dion explored the exhibit along with her designers, and confessed that “even now, I honestly don’t really understand what camp is.” No matter: Garcia and Kim had done their research, resulting in a Vegas showgirl ensemble made of countless strands of silver-gold glass beads that took many thousands of man hours to construct, paired with a spiky feathered headpiece.

“I’m just honored that they wanted me to be a part of this whole process,” Dion said.

After walking the red carpet — actually, a pink-carpeted staircase — guests entered the Met’s vast Great Hall, where they were greeted by an imposing centerpiece of pink roses, topped by pink flamingoes.

Some toured the exhibit, while others headed straight to the museum’s airy Petrie Court to sip cocktails and munch on crispy sea bass hors d’oeuvres, bits of foie gras, or mini-BLT towers.

But she liked what she learned about camp. “It’s extra,” she said. “Exaggerated — happily and proudly.” That was the spirit, she said, of her outfit, a short blazer dress by Dapper Dan for Gucci, with bright green eyeliner, sparkly leggings, and a Judith Leiber purse in the shape of a huge, golden retro cellphone. 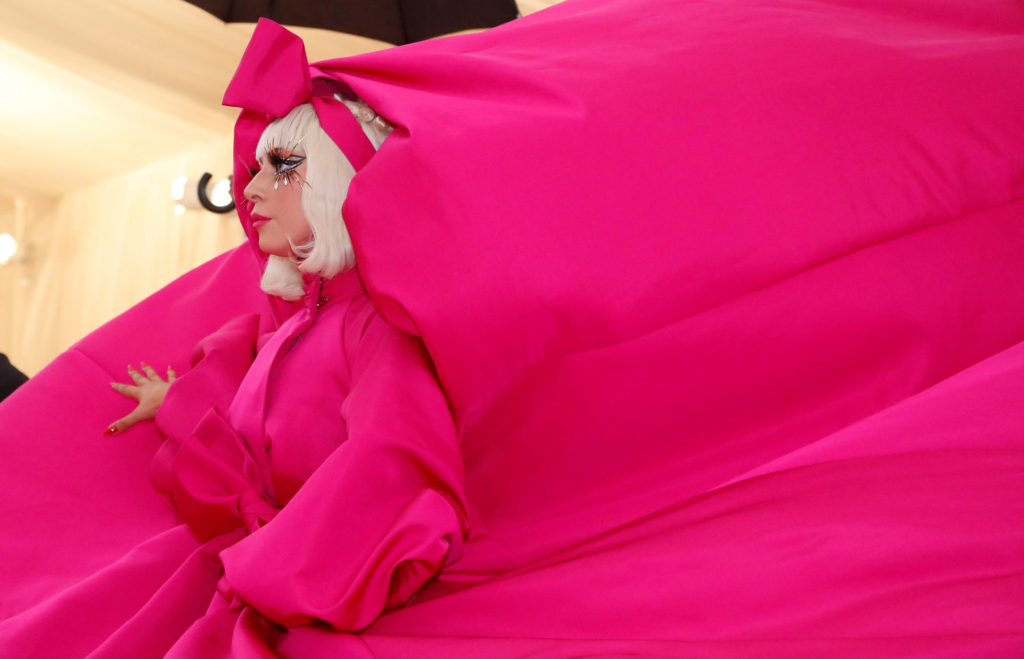 Lady Gaga at the Met Gala in New York City, on May 6, 2019. Photo by REUTERS/Mario Anzuoni

“It’s the exaggerated version of myself,” she said of the outfit. “Big, bold, but still you.”

Laverne Cox had no trouble understanding the camp theme; in college at Marymount Manhattan, she’d been “obsessed with Susan Sontag,” the author of the 58-point essay, “Notes on ‘Camp,'” on which the Met exhibit is built.

In fact, Cox, a star of “Orange is the New Black” and the first openly transgender person to be nominated for an Emmy, was able to reel off competing definitions of camp.

“It’s about taking a thing and exploding it to the biggest degree. It has in the past been used as a pejorative, but this evening reclaims it.”

“It’s of course artificial, but also parody,” said Cox, wearing a striking sculptural gown by Christian Siriano, along with turquoise hair. “It’s a comment on culture. Also, there’s high camp vs. low camp. And there’s an invisible wink of camp.” She pondered whether Garland and daughter Liza Minnelli were the same type of campness.

Billy Porter, too, had done some thinking about camp. The “Pose” actor solidified his growing reputation as a red-carpet star with a dramatic entrance as an Egyptian sun deity on a litter carried by six shirtless men. His golden ensemble — we’re talking gold on the head and the face, too, as well as huge golden wings — was designed by the Blonds.

“The kids today call it being ‘extra,'” Porter said inside, of the camp aesthetic. “It’s about taking a thing and exploding it to the biggest degree. It has in the past been used as a pejorative, but this evening reclaims it.”

Porter was also carrying a purse with a written message that demanded, using an expletive, to be paid fairly.

“It means,” he said with a grin, “that you can’t pay me scale no more! Get the prices right.”

Attending his first gala was Max Hollein, who took over as the museum’s director last year. Hollein said that since work on the exhibit began, he and museum colleagues have been finding the camp in familiar works all over the museum. 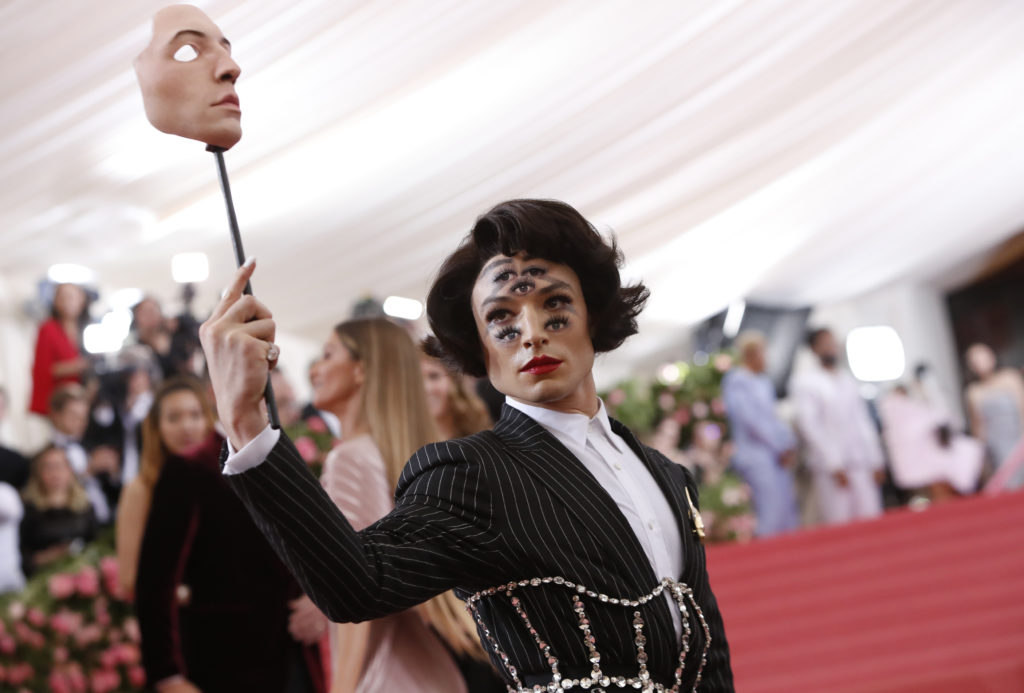 Ezra Miller at the Met Gala in New York City, on May 6, 2019. Photo by REUTERS/Andrew Kelly

“Camp is a lens, a way of seeing the world,” he said, an aesthetic that existed “long before we knew what it was.” In all, Hollein pronounced the affair “quite an extravaganza.” The annual party is, of course, a fundraiser, and the chief source of funding for the Costume Institute; museum officials said Tuesday that this year’s haul was a record $15 million.

For Broadway actor Patrick Vaill, examining the fashions at the exhibit, the adjective that seemed most apt was “joyful.” Vaill was joined by his “Oklahoma!” co-star Damon Daunno, who’s nominated for a Tony for his role as Curly.

Daunno, dressed in a pink Prabal Gurung suit, praised Anna Wintour, co-chair of the gala for more than two decades, for welcoming members of the Broadway community to the party, along with better-known megastars of TV, movies, music and sports. “How generous and hip that she does that,” he said.

Other Broadway actors at the gala included the five leads from the Temptations musical “Ain’t Too Proud,” in black-and-white Thom Browne suits, and Santino Fontana, starring now in “Tootsie.”

Fontana and his wife, actress Jessica Fontana, attending their first Met Gala, professed — like many — to some lingering confusion over the meaning of camp, without much help from “studied triviality.” But they seemed to know it when they saw it.

Left: Billy Porter at the Met Gala in New York City on May 6, 2019. Photo by REUTERS/Andrew Kelly