If you’ve been to a bookstore or airport kiosk in the past 20 years, you’ve likely seen one or more James Patterson novels out front, their covers emblazoned with bold lettering and edgy illustration suggesting intrigue, sex and danger. 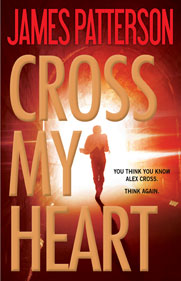 James Patterson has authored dozens of best-selling novels, including those from the “Alex Cross” detective series.

Despite having dozens of best-selling titles to his name, including crime and mystery novels and even children’s books, Patterson is very worried about the present and future of books in America, as the publishing world continues to grapple with the tectonic shifts brought about by the advent of ebooks and their major distributor, Amazon.

“This is a period of evolution, revolution, whatever you want to call it — big shift into ebooks, and I just think that we have to slow down and make sure it’s an orderly transition,” Patterson told Jeffrey Brown. “And I think that what people need to understand that what’s at risk here is American literature.”

Earlier this year Patterson announced he would donate $1 million of his own money to independent booksellers around the country, an effort to help them directly and to raise awareness for their struggle to stay afloat.

Meanwhile Patterson’s publisher, Little, Brown & Co., is owned by Hachette, which is currently undergoing tense contract negotiations with Amazon. As the negotiations drag on, some Hachette titles are being delayed, while upcoming titles have had their pre-order buttons removed.

At last week’s BookExpo America in New York — the industry’s biggest trade show of the year — Jeffrey Brown spoke to Patterson about his thoughts on the publishing world’s transition, what’s to be done about it and how Patterson went from working at a mental hospital to becoming a literary rock star.

The interview is part of a broader look at the publishing world airing Friday on the PBS NewsHour.