Our February pick for the PBS NewsHour-New York Times book club, “Now Read This,” is Meg Wolitzer’s “The Wife.” Become a member of the book club by joining our Facebook group, or by signing up to our newsletter. Learn more about the book club here and see all the previous book club selections here. 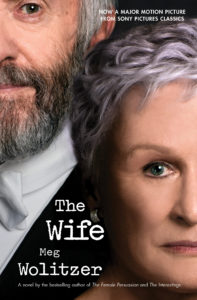 Meg Wolitzer is the author of more than a dozen novels, as well as an instructor in the MFA program at Stony Brook Southampton. Three of her books have become movies, including this month’s pick, “The Wife,” for which actress Glenn Close has been nominated for an Oscar. Wolitzer said she often turns to other books when she gets stuck in her writing, but doesn’t force herself to stay at her laptop if it’s not a good writing day.

As for “The Wife,” which tells the story of a woman who gives up her own career for her husband’s, the story came out of another book. Wolitzer said that as she was writing it she didn’t know exactly how it was going to end. “I tried to go as deeply inside that marriage as I could, hoping that I would understand what to do.” In the end, she knew.

Below, read more writing advice from Wolitzer, about her daily writing routine, and the one book she thinks everyone should read.

If I am deep inside a novel and feeling pretty excited about what I’m doing, then I wake up each day with a mission. First I go out and walk the dog and think about my work, and then I come home and sit down at the laptop, picking up where I had left off work the day before. Even if I have to leave the apartment for a long stretch of time, I am still very much in the universe of my book. But on one of those other days, those days when I am feeling a bit uncertain what I’m doing, the routine is different. I try not to force myself to stay at my laptop, or to keep trying to work through a bad paragraph. Instead, I might read a passage from a piece of published fiction that I love, particularly a section that seems as if it was exciting to the writer when he or she wrote it. Sometimes, locating that excitement (even in someone else’s writing) can serve as a backward way in to finding a feeling of excitement, and engagement, with my own work.

2. What is one book you think everyone should read?

“Charlotte’s Web” by E.B. White. It was the first book I cried over. I recall sobbing about the death of a spider, but of course I was also reckoning with general mortality — spiders’, pigs’, humans’, my own. That novel has that famous line in it, but I like thinking of the whole passage, which Charlotte says to Wilbur:

“You have been my friend,” replied Charlotte. “That in itself is a tremendous thing. I wove my webs for you because I liked you. After all, what’s a life, anyway? We’re born, we live a little while, we die. A spider’s life can’t help being something of a mess, with all this trapping and eating flies. By helping you, perhaps I was trying to lift up my life a trifle. Heaven knows anyone’s life can stand a little of that.”

“Mrs. Bridge” by Evan S. Connell is a novel I love, and I have often mentioned it when asked about favorite books, and I’ve written about it for the New York Times’s “Enthusiast” column. To many people it’s a classic, but there are a lot of other readers who have never heard of it. It’s a 1959 novel about a Kansas City housewife just before World War II. She is limited by circumstances as a woman living in that era, but also by who she is. It’s written in short, piquant sections, and it’s beautiful, hilarious, tragic, and always original. I have read it so many times that I would like to go on Jeopardy! and have the category be Mrs. Bridge.

I had been working on something else, also in first-person, that was rather serious and a bit airless, and I kept trying to slip in moments of wit. And then I wondered why I should need to sneak wit in. I put that manuscript aside (I didn’t have a lot of it yet) and began to write “The Wife,” in a voice (Joan’s) that was both funny and angry. It felt freeing to let my protagonist have her say, in the exact way she wanted to express it. As for finishing, I wasn’t sure how the book was going to end at first, so I tried to go as deeply inside that marriage as I could, hoping that I would understand what to do. The structure of the novel, and the first-person narrative, made it a little easier for me to see when it was over than with some of my other books. Essentially I had to figure out: When is Joan done telling her story? So when she had had her say, then I knew I was done.