The Russian Entrepreneur Who Hired Picasso, Stravinsky and Balanchine to Revolutionize the Ballet

Under the direction and mentorship of Serge Diaghilev, the visual artists, composers and choreographers who worked with the Ballets Russes transformed ballet into an avant-garde art form, breaking with tradition and creating a reflection of 20th century modernity. Inspired by the National Gallery of Art’s exhibit “Diaghilev and the Ballets Russes,” choreographer Dana Tai Soon Burgess developed a new work, “Revenant Elegy. Video shot by Cindy Huang, Justin Scuiletti and Ellen Rolfes. Edited by Ellen Rolfes.
Serge Diaghilev looked to the future, not the past, in producing new ballets. Founder of the famous Ballets Russes company, Diaghilev had an eye for talent, and brought his knowledge of visual arts, music and dance — as well as passion — to inject the art form with a new spirit of collaboration and innovation. His legacy is the subject of the National Gallery of Art’s current exhibit, “Diaghilev and the Ballets Russes, 1909-1929: When Art Danced with Music.”

As a Russian cultural diplomat, trained composer and art critic, Serge Diaghilev originally came to Paris in 1906 to produce two seasons of opera at the bequest of the Russian government. When the Russian Imperial family’s coffers ran dry, Diaghilev remained in Paris, then the center of the Western art world and the avant-garde. He founded the Ballets Russes in 1909.

The exhibit at the National Gallery in Washington features original costumes, paintings, sculptures, prints and drawings, photographs and posters, all created for or inspired by the company’s 20 years of performance in Paris and tours of Europe and North and South America.

Prior to Diaghilev and the Ballets Russes, ballet was more concerned with virtuoso technique than with the concept of art creation. It was more like vaudeville than the dance form we know today, says National Gallery of Art curator Sarah Kennel. “Ballet had not really become a modern art form until the 20th century, until the Ballets Russes.”

Kennel describes Diaghilev as the first great “cultural entrepreneur” of the 20th century. “Diaghilev had his finger on the pulse of modern culture,” Kennel said. “He brought [artists] to Paris, to this place where they could creatively experiment. He had an ability to raise money and to convince people of very different stripes to work together. So it was kind of a laboratory of experiment.”

Under the direction and mentorship of Diaghilev, the visual artists, composers and choreographers who worked with the Ballets Russes transformed ballet into an avant-garde art form, breaking with tradition and looking for something new, something that reflected the modernity of the 20th century. Lynn Garafola, author of “Diaghilev’s Ballets Russes” and professor of dance at Barnard College, says the artists who created ballets in the 19th century did not necessarily have an interest in how the choreography, costumes, music and set designs came together.

“Right from the start, Diaghilev was concerned with the total artwork, what he called the gesamtkunstwerk,” Garafola said. “That all the pieces [of a performance] should somehow meld — that the whole should be bigger than the individual parts … that is what distinguished the Ballets Russes.” 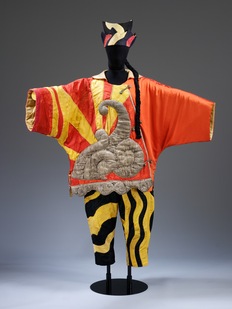 Based off of designs by Pablo Picasso, this costume was created for the role of the Chinese conjuror from the 1917 Ballets Russes piece, “Parade.” The costume was worn by Leon Woizikovsky both when he danced “Parade” with the Ballets Russes and the solo elsewhere. It survived the war buried in his native Poland. Courtesy of the National Gallery of Art.

Likewise, the historic garments, set pieces and music come together to tell the story of the Ballets Russes at the National Gallery. Faceless mannequins model fantastical costumes of fauns, sea creatures and burlesque side show performers, items designed by Russian artist Leon Bakst, as well as Pablo Picasso, Henri Matisse, even Coco Chanel. Original stage backdrops hang 34 feet above the exhibit floor, while the scores commissioned especially for the company play in the background, including Igor Stravinsky’s “The Rite of Spring” and Claude Debussy’s “Afternoon of a Faun.”

Museum visitors can see movement of dancers and choreographers captured in still photographs and watch film excerpts of modern companies recreating performances of the Ballets Russes.

Normally, an art museum would not be in the business of commissioning dance, but without seeing the physicality of dance, Kennel says it is hard to understand the importance of the Ballets Russes.

“The Ballets Russes is not just a historical phenomenon that has left objects that we can show in a museum context. But it is also a spirit of innovation and collaboration,” Kennel said. And it is for this reason that the National Gallery of Art invited musicians, dancers and choreographers, including Dana Tai Soon Burgess, choreographer and founder of Dana Tai Soon Burgess Dance Company, to perform at the gallery.

An American choreographer with Scottish-Korean ancestry, Burgess has been based in Washington for more than 20 years. This is not his first time choreographing by commission for an art museum. In 2010, the Corcoran Gallery of Art in Washington invited him to choreograph a new dance for an exhibit by American artist Spencer Finch on the subject of clouds. Both of his parents are visual artists — another reason he was excited to collaborate with the National Gallery. 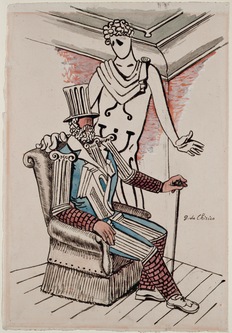 “Le Bal” tells the story of a man who falls in love with a masked woman at a masquerade ball. When she takes off her mask, he discovers that she is not beautiful, but old and ugly. He flees before she takes off a second mask, revealing her beauty and youth.

“In a work like Le Bal, there was an interest on the part of the visual artist [and] the choreographer — on the different ideas of masks. I see that as a kind of mystery aligned with the Surrealists,” Garafola said.

Surrealists like Man Ray and Salvador Dali were fascinated by the subconscious and how it translated into art. Influenced by the Freudian concepts of free association and the study of dreams, the Surrealists wanted to expose the uninhibited mind.

With “Le Bal,” de Chirico’s sets feature classical columns in decay and bits of the outside world indoors. The costumes are stiff; they made the dancers appear as if they were partially made out of stone or brick. 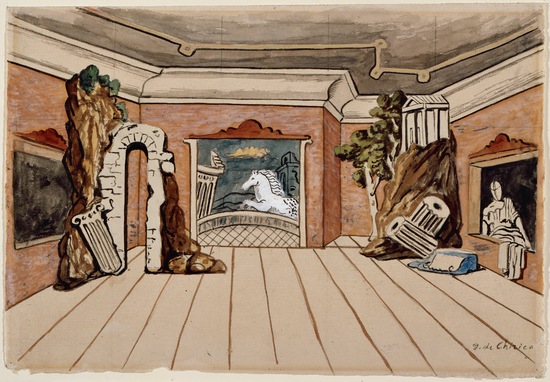 Above: Sketches by Giorgio de Chirico, courtesy of the National Gallery of Art.

Kennel says de Chirico’s designs for “Le Bal” aligned with artists’ struggle to reconcile modernism with classical forms of art, music and dance. The designs are “about [how] the modern self is sort of lost in the world. We [no longer] have a connection to our classical past. It’s all around us, but not holistic,” Kennel said.

In reanimating the spirit of the Ballets Russes, Burgess wanted to avoid choreographing something derivative by taking his inspiration from the psychological concepts that gained popularity in the 1920s. Instead of tangible masks, Burgess chose to explore the masks or layers within the subconscious and memory. “I was very interested in [this] internal emotional landscape that can be a major factor in the ability of someone to love or be loved.”

In Burgess’ dance, a middle-aged woman relives her memories of a thwarted romance, and feels the pain and loss of unrequited love.

Though Burgess choreographed “Revenant Elegy” with the Ballets Russes exhibit in mind, that influential heritage would be present in his work regardless, even more than 100 years after Diaghilev founded the company.

“We can really trace all our lineages as dancers back to this pivotal moment in time as contemporary and ballet dancers,” Burgess said.

Many of the dancers and choreographers who were part of the Ballets Russes went on to establish some of today’s most well-known ballet companies and schools in Europe and the United States, infusing their own work with the “Ballets Russes model” of collaboration, innovation and experimentation.

“This has given me an opportunity to research a ballet, to be inspired by the exhibition, and yet make contemporary art. And so that’s one of the greatest outcomes of the exhibition, is that it’s not just something stagnant that we walk by and cannot engage with, but it has really inspired a whole new choreography in this century.” 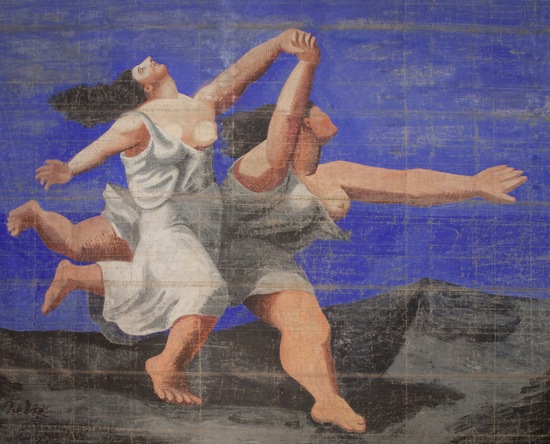 While this front cloth was designed by Pablo Picasso for the Ballets Russes’ 1924 “Le Train Bleu,” the cloth was completed by Prince Alexander Schervashidze who painted the two giantesses off of Picasso’s preparatory sketches. Photo courtesy of the National Gallery of Art.