‘Beaten Down, Worked Up’ is our September book club pick

Our September pick for Now Read This, the PBS NewsHour’s book club with The New York Times, is Steven Greenhouse’s “Beaten Down, Worked Up,” which traces the history of the labor movement in the United States, and considers the factors that led to a significant decline in worker bargaining power in recent decades. 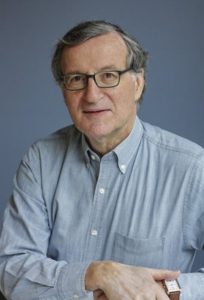 Greenhouse, who was a labor reporter for The New York Times until 2014, says he wrote “Beaten Down, Worked Up” because he is “deeply concerned about what is happening to many American workers” in an era where income inequality is worse than ever and much of U.S. politics and policy is subject to influence by corporations and wealthy donors. The author looks at key events that defined today’s modern labor landscape, from the GM strikes that led to the unionization of the automobile industry in the 1930s to the more recent “Fight for $15” campaign, which prompted walkouts of fast-food workers across the country. He also considers how workers’ collective power can be rekindled and reimagined in the 21st century.

Attorney Zephyr Teachout wrote that Greenhouse’s “engrossing,” “character-driven” book “achieves a near-impossible task,” tracing a century of worker strikes “without overcondensing or oversimplifying, and with plausible suggestions for the future.”

“The arc of history doesn’t bend toward justice or toward tyranny,” Teachout wrote in a New York Times book review. “In his telling, history is made by human beings facing difficult choices about whether or not to strike, how long, how much to demand and when to compromise. As such, this is a book that breathes hope based on contingency.”

In an interview with the PBS NewsHour’s economics correspondent Paul Solman back in January, Greenhouse spoke about the recent resurgence in union activity in the U.S., as evidenced by the success of the Culinary Workers’ Union in Las Vegas. “People are tired of the income inequality. They’re tired of wage stagnation,” Greenhouse said. “We’re seeing a ton of people unionize … Whether that will be enough to turn around the decline is another question. But there’s something really percolating now.”

Greenhouse will join the NewsHour later this month to discuss the labor movement through the lens of the current economic crisis, which has further strained many American workers. We hope you’ll read along.

Economist Paul Romer: To save American jobs, we must bring virus to ‘screeching halt’