In Belfast, the capital of Northern Ireland, hundreds of colorful murals line the city’s streets, detailing a century’s worth of conflict and political division.

While some of Belfast’s political murals date back to the early 1900s, this artistic tradition has carried on over the years as an outlet for political statements. In particular, muralists have made a canvas of “peace walls,” the 300 miles of barriers that once split warring militias during The Troubles, a particularly violent period of war between Protestant and Catholic factions in Northern Ireland that lasted from 1969 to 1998. 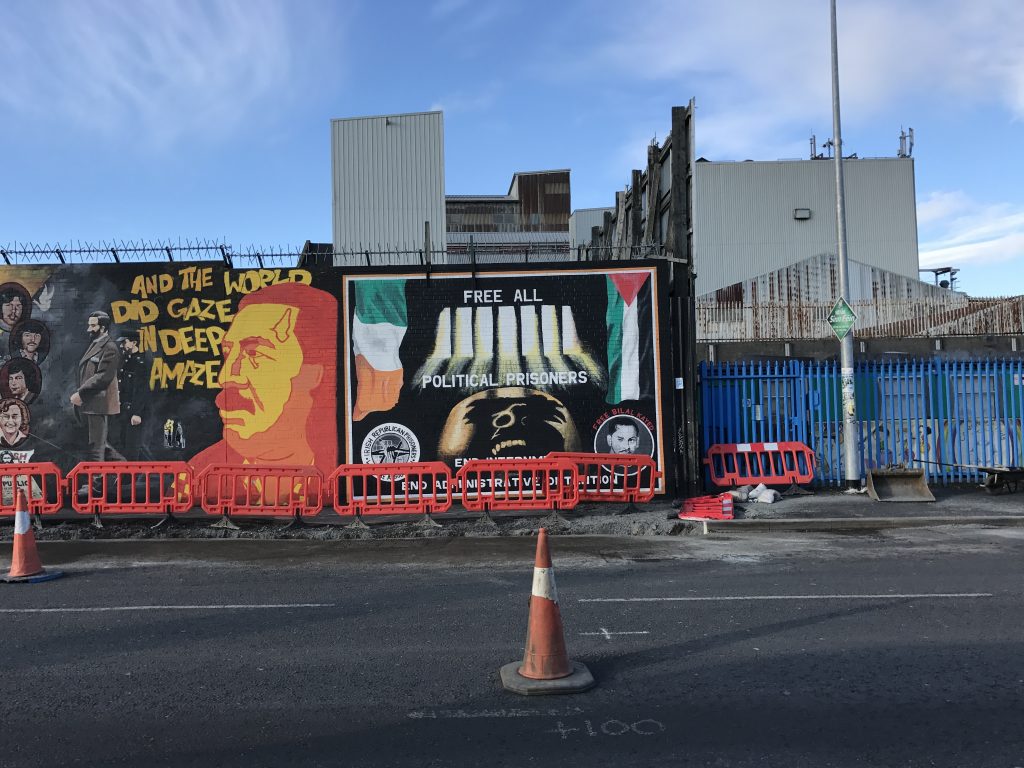 In Protestant sections of the city, murals proudly display United Kingdom flags and celebrate Northern Ireland’s colonial relationship with Great Britain. Murals in Catholic neighborhoods boast Irish flags, commemorating nationalists who lost their lives fighting for an end to British rule and the reunification of Northern Ireland, which remains part of the UK, to the independent Republic of Ireland in the south.

Many of the murals throughout Belfast depict individual combatants who fought in the sectarian civil war. Others portray gun battles or bomb attacks from paramilitary troops, such as the 1971 bombing of McGurk’s Bar in Belfast and the 1998 car bombing of a shopping center in Omagh, Northern Ireland. More than 3,500 people died during The Troubles. 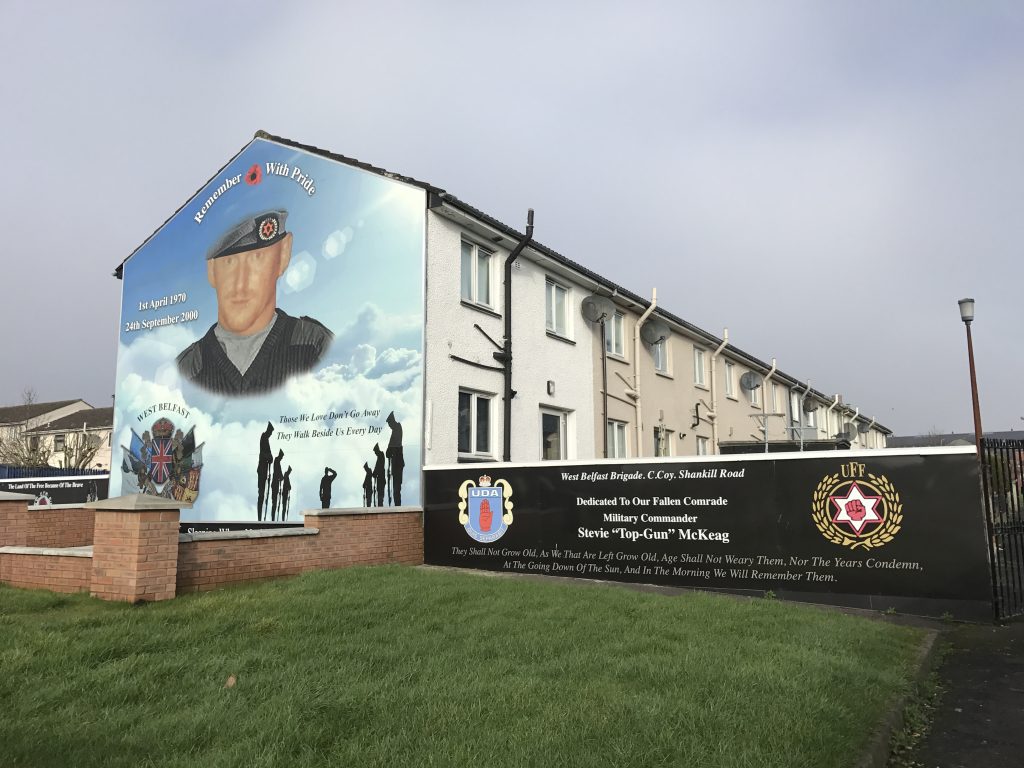 Stevie “Top Gun” McKeag, is believed to be responsible for at least 12 Catholic killings. The mural has had portions repainted to to give McKeag a more military style and muralists removed 25 ft high skeleton with a machine gun. It is flanked by crests of loyalists militias.
Photo by Ivette Feliciano/PBS NewsHour Weekend

In 1998, the internationally-brokered Good Friday Agreement, also called the Belfast Agreement, officially ended the conflict and set up a power-sharing government between Protestant Unionists and Catholic Nationalists. Since then, the violence has largely subsided. But tensions still linger between Protestant and Catholic neighborhoods, with some residents reluctant to bridge the gap, said Peter Hughes, who gives tours of Belfast’s murals and grew up during the conflict.

“If you were told for your whole lifetime, ‘Don’t go there, it’s very dangerous,’ then today, ‘The gates are open, you can come across,’ it’s very difficult for a whole generation of people to become convinced of that,” he said. 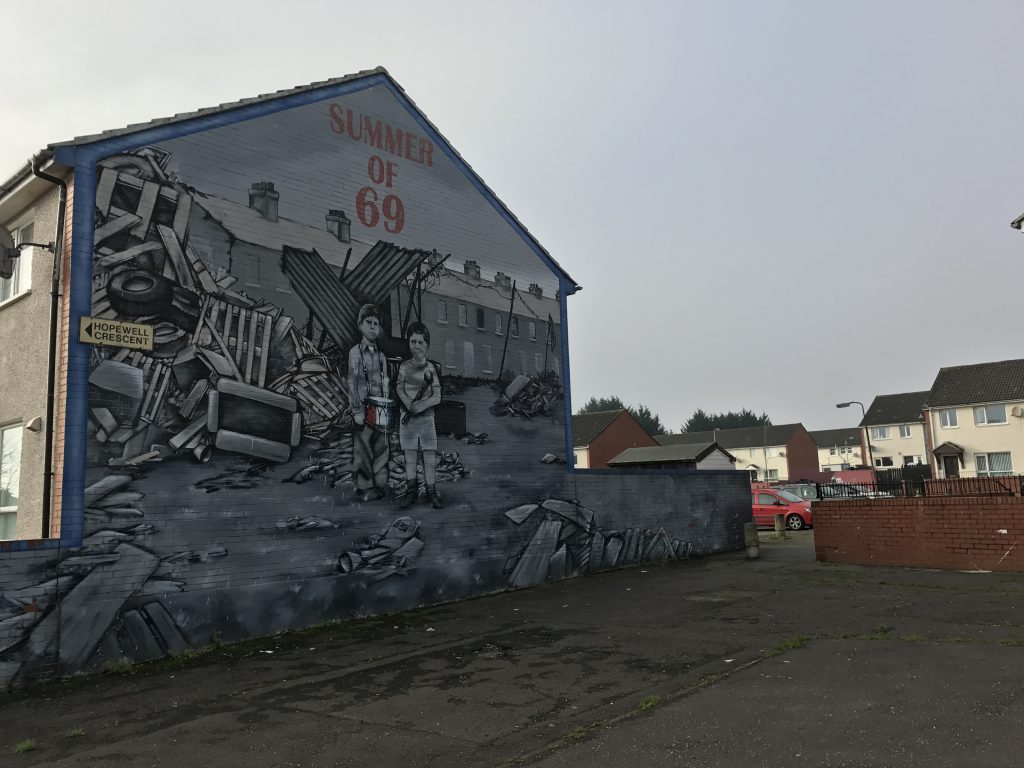 Belfast’s largest Protestant community, Shankill, is covered in murals that depict masked, gun-toting loyalist fighters. It is separated from The Falls — the city’s largest Catholic neighborhood — by a peace wall first erected during The Troubles that remains closed on nights and weekends. About 50 peace walls exist in Northern Ireland, even as politicians vow to remove them by 2023. 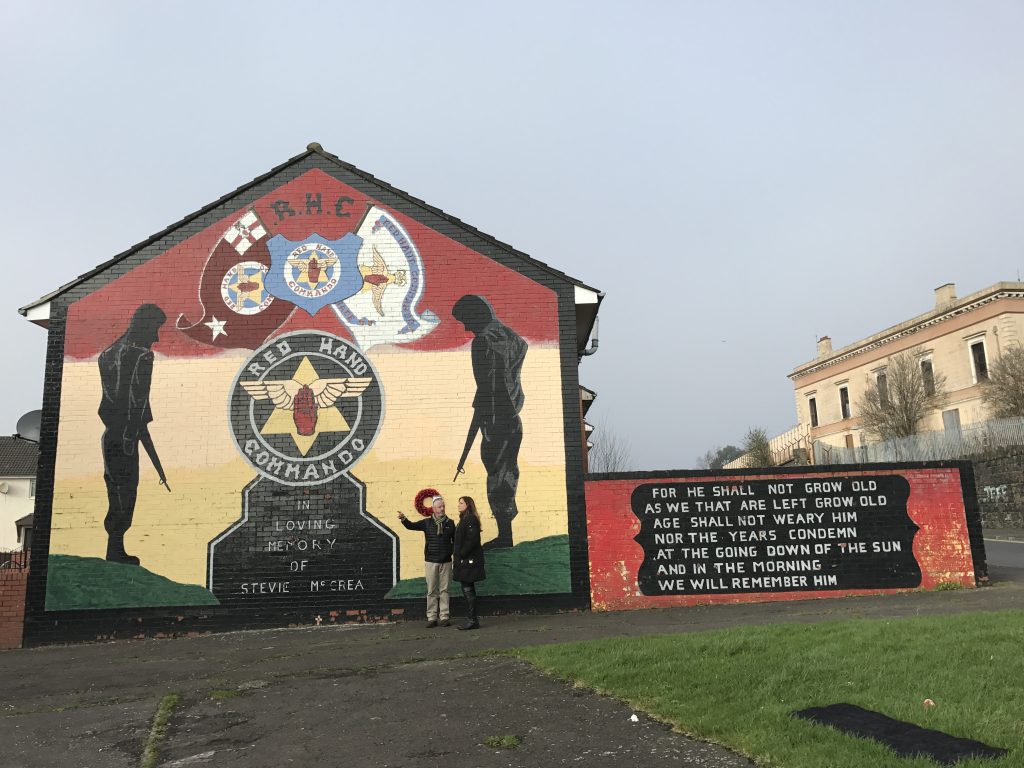 A mural recalls violence in Belfast, Northern Ireland, during the summer of 1969. Photo by Ivette Feliciano/PBS NewsHour Weekend

The “Summer of ‘69” mural at Hopewell Crescent in Shankill depicts an iconic photo of two children, one Protestant and one Catholic, who went to bed as friends and woke up to a bomb-ravaged neighborhood and burned-out homes, an overnight event believed to have launched riots and the start of The Troubles.

Hughes said that mural was representative of the turning point for Northern Ireland’s youth in the conflict.

“Kids were told they couldn’t play with their friends any more because of their religion, the city was split … 1,800 families lost their homes in two days,” he said. “Parents created a boogie monster and inadvertently they [turned] kids against each other.” 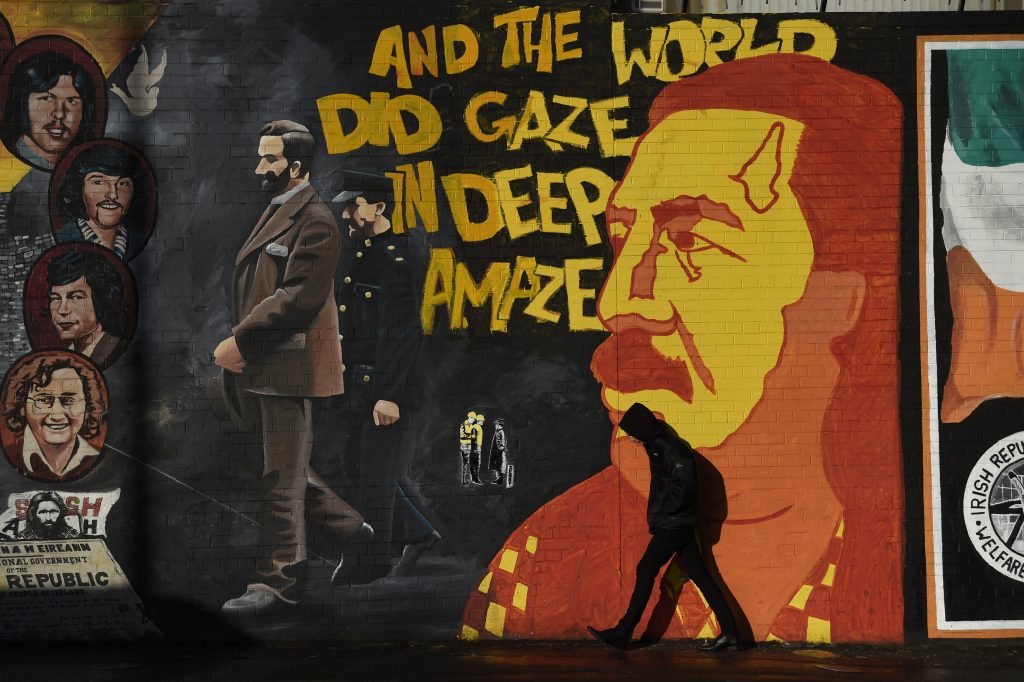 A man walks past a mural on the Falls Road in Belfast, Northern Ireland, on Jan. 10, 2017. Photo by Clodagh Kilcoyne/Reuters 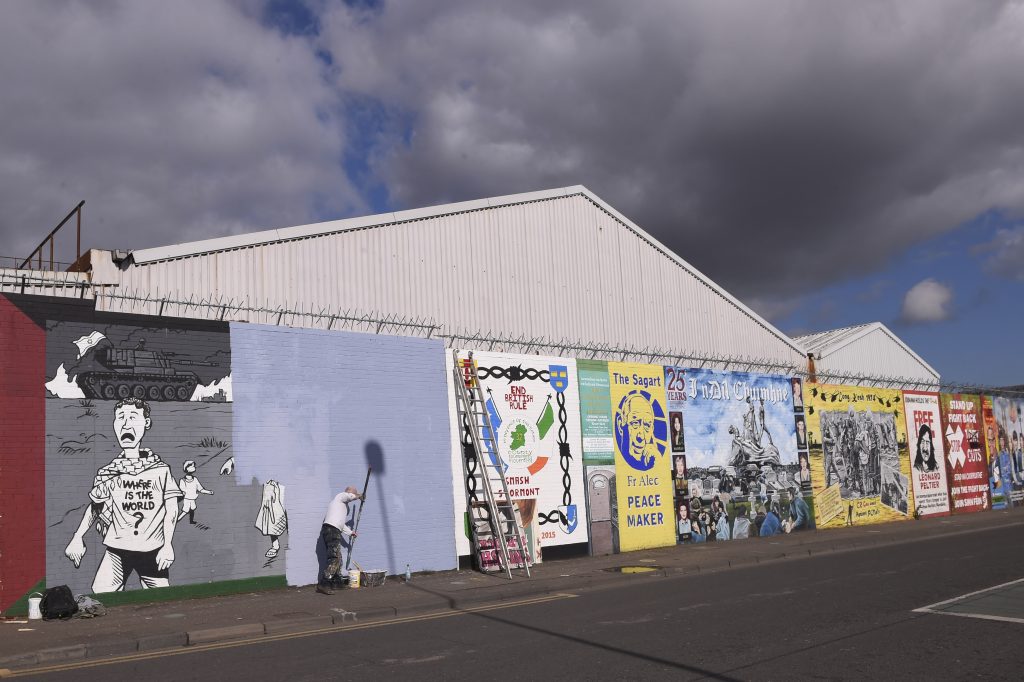 A man paints over a mural on the Falls Road, a nationalist area in Belfast, Northern Ireland, on March 10, 2016. A community cohesion strategy set up by the Northern Ireland housing executive in 2015 aims to re-image Northern Ireland over a 10-year-period, by replacing paramilitary murals and sectional symbols with images of a shared history. Photo by Clodagh Kilcoyne/Reuters

In the last several years, some communities have repainted portions of the most controversial murals or erected new ones in an effort to continue normalizing relationships between Protestants and Catholics. Under the Re-Imaging Communities project through the Arts Council of Northern Ireland, some communities have received funding to create new murals in place of older images.

Some residents say the murals mark an important part of Northern Ireland’s past and should not be taken down. But newer images and public art projects could help the communities move forward, Anne Ward, the Community Development Officer at the Arts Council, told The Atlantic.

“Young children walking past masked gunmen has an impact on the local community. So, the program is all about the community wanting to transform … and creating a new Northern Ireland, ” Ward said.

See more photos of the murals below. 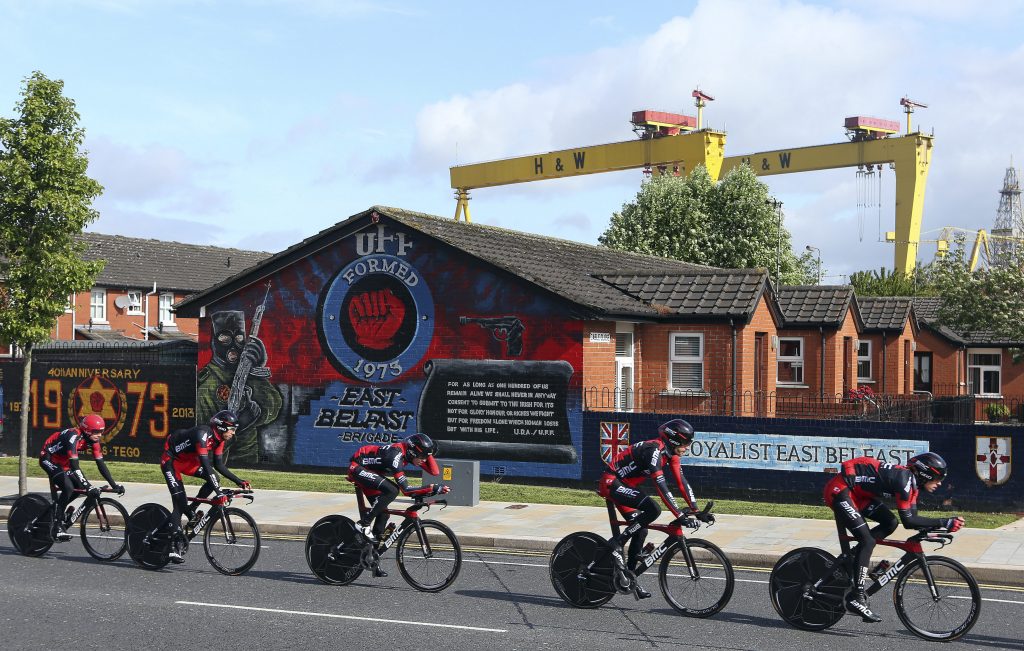 The BMC cycling team pass a loyalist paramilitary mural painted on a wall in east Belfast as they make their way around the route of the Giro d’Italia team time trial May 9, 2014. Photo by Cathal McNaughton/Reuters 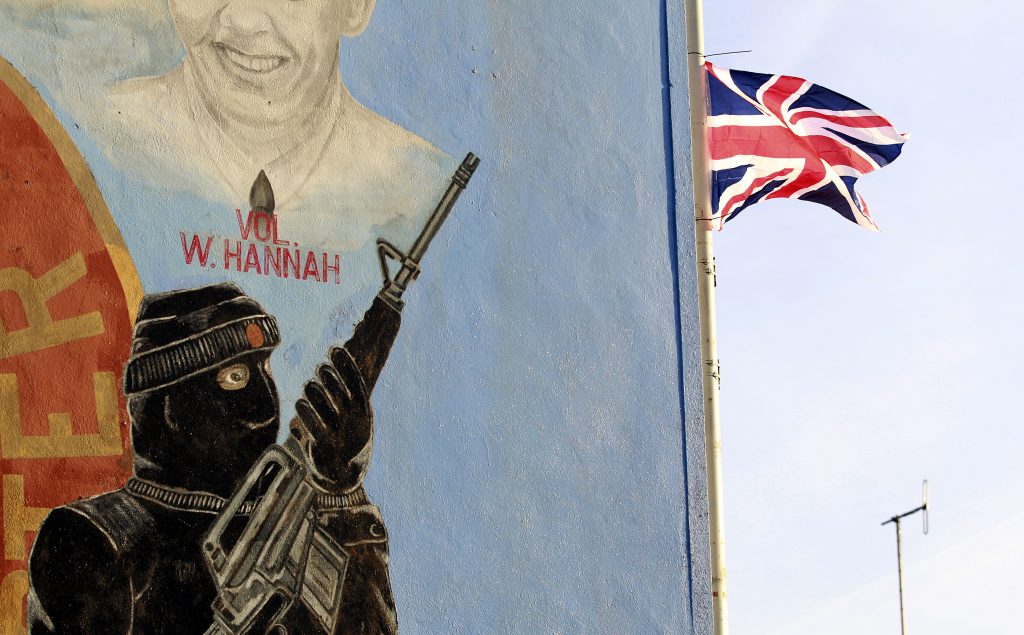 A Union flag flies on a lamp post beside a loyalist paramilitary mural on the Shankill Road area of west Belfast December 11, 2012. Police were attacked in Belfast on Monday night by loyalists enraged by a decision to remove the British flag from Belfast City Hall, which has sparked eight consecutive days of demonstrations. Photo by Cathal McNaughton/Reuters 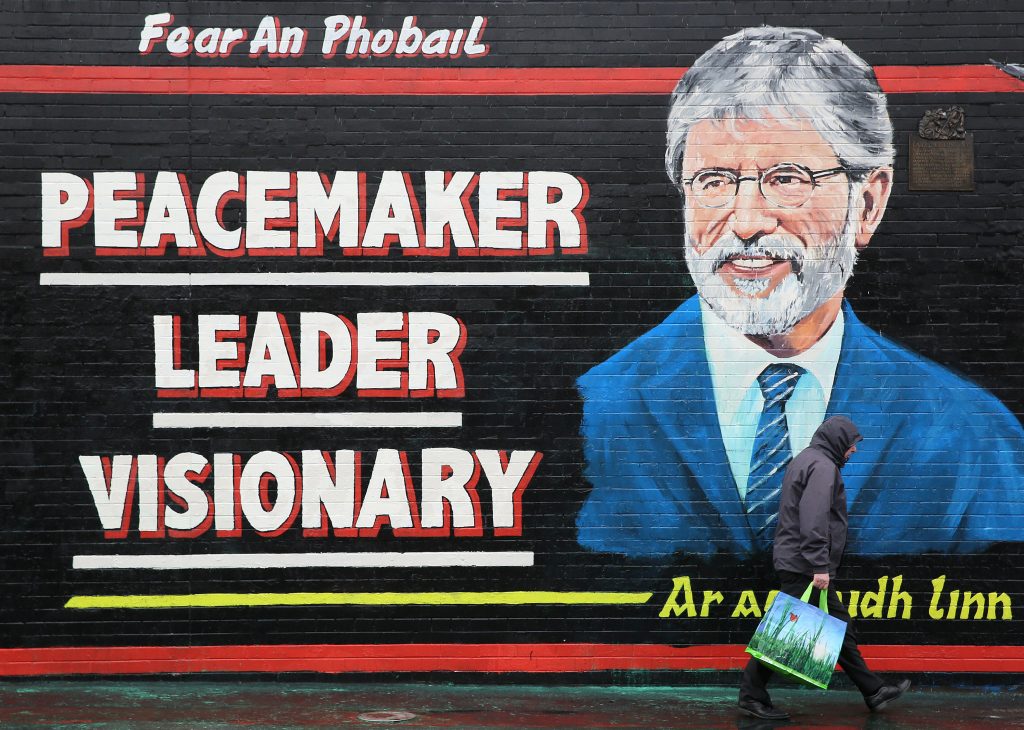 A man walks past a mural of Sinn Fein President Gerry Adams on the Falls road, Belfast May 5, 2014. Northern Ireland police released Gerry Adams from custody on Sunday and the Sinn Fein leader sought to calm fears that his four-day detention could destabilize the British province by pledging his support to the peace process. Photo by Paul Hackett/Reuters

Left: This mural in Belfast, Northern Ireland, is dedicated to Bobby Sands, a volunteer for the Provisional Irish Republican Army who became a member of the United Kingdom Parliament. He died on hunger strike while in prison. Photo by Ivette Feliciano/PBS NewsHour