This artist reimagines pop art with a Plains Indian perspective

Oklahoma City-based artist Brent Learned, an enrolled member of the Cheyenne and Arapaho Tribes of Oklahoma, is known for his colorful, impressionistic portrayals of the Plains Indian way of life. He draws, sculpts, but mostly paints, in vibrant hues that belie the sometimes dark material he’s depicting.

As of late, Learned has experimented more with his work, putting the same Plains Indian subjects into pop art settings, using satire and sometimes nudity, as well as doing his own versions of iconic paintings by Pablo Picasso, Jean-Michel Basquiat and Gustav Klimt.

“It’s not your grandparents’ Indian artwork,” he said. “When people think of Native American art, they think of a guy on a horse, or hunting a buffalo, or a woman in a teepee … I want you to look at my work and say, ‘Oh my god, he goes outside the boundaries.’” 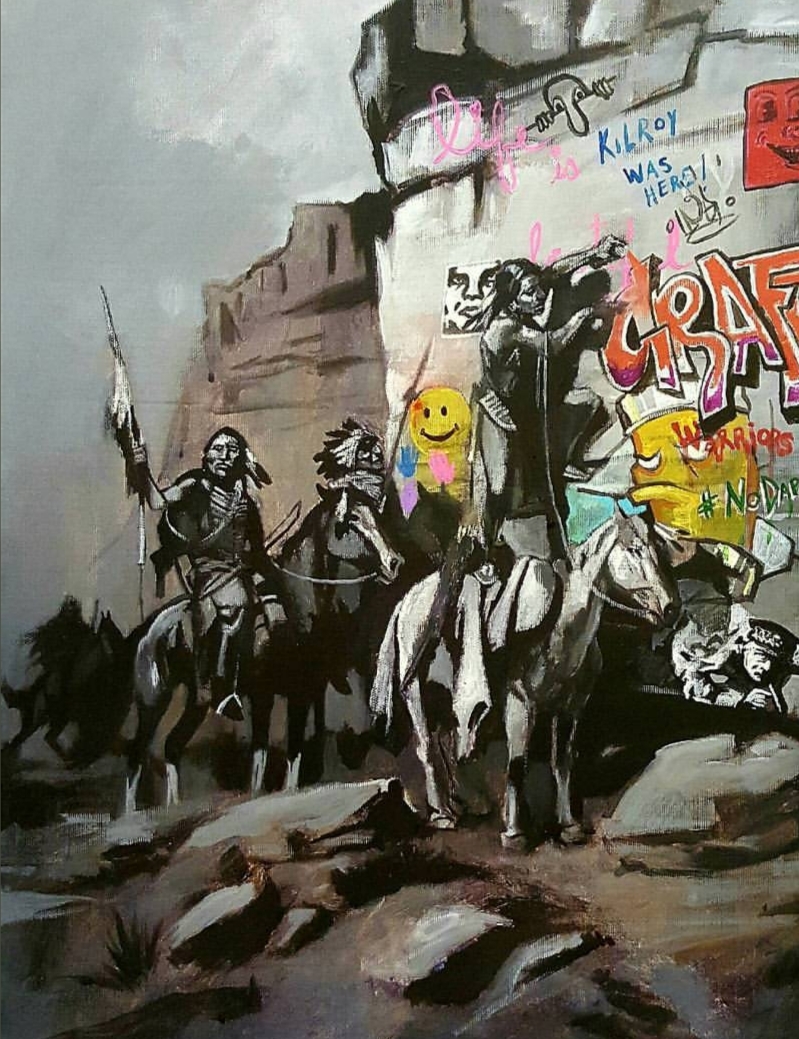 The PBS NewsHour recently caught up with Learned, whose work is on display at the Parse Seco Art Gallery in Taos, New Mexico, and whose 2017 exhibit of nude Native American work, “Native American Body of Art,” will return to Oklahoma City later this year. He spoke to the NewsHour by phone from his Oklahoma City home.

How did you first come to painting? Was it through the impressionists?

My mother was Cheyanne and Arapaho, and my father was German and English. He was a sculptor, so growing up, I’d watch him sculpt. Dad and I would sit around and talk about the great Western cowboy artists of the day, like Frederic Remington and Charles M. Russell, and then also some Native American artists, such as [Cheyenne painter] Dick West, or [Muscogee-Pawnee-Wichita artist] Acee Blue Eagle.

Then I went to the University of Kansas to study art. A lot of the teachers there were abstract painters, and they wanted me not to paint my culture or heritage, but to paint like them. So I explored impressionism for awhile: Monet, Picasso. 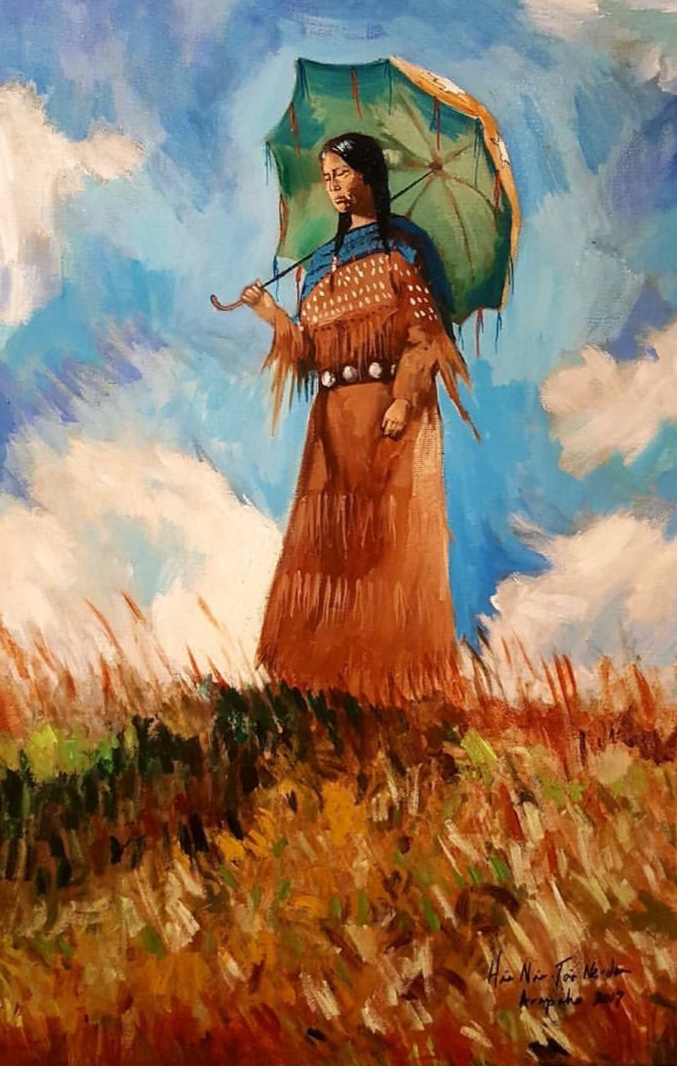 But then at my graduation, my mom said: “You know what would make me proud? If you painted your heritage.” So I did. I talked to elders, I read the history. My relatives would tell me stories handed down to them. It was all gathering information for future paintings.

Some of your paintings depict daily life of the Plains Indians in a more traditional setting, but some are really unexpected. You put historical scenes in a pop art setting, for example.

My dad said something that stuck with me. He said: “There are only so many ways you can paint a man roping a steer or hunting a buffalo. What matters is how you tell that story.” So I try to do something different.

“There are only so many ways you can paint a man roping a steer or hunting a buffalo. What matters is how you tell that story.”

I do satire art, I do pop art. Other Native artists are doing pop art too. A few years ago, I noticed a trend of people trying to convey what’s happening on reservations today through pop art. So I put together an exhibit of those artists.

More recently, you’ve also been doing paintings that are modeled after Klimt, Picasso, Basquiat, Banksy, but with Native American subjects —

I have. So in my version of Gustav Klimt’s “The Kiss,” I changed the regalia of the clothes the man and woman wear. Instead of Austrian clothing, I made it Cheyanne and Arapaho. I put a buckskin on the woman, kept the man’s robe but added a blanket, changed his hairstyle. I made it Native. 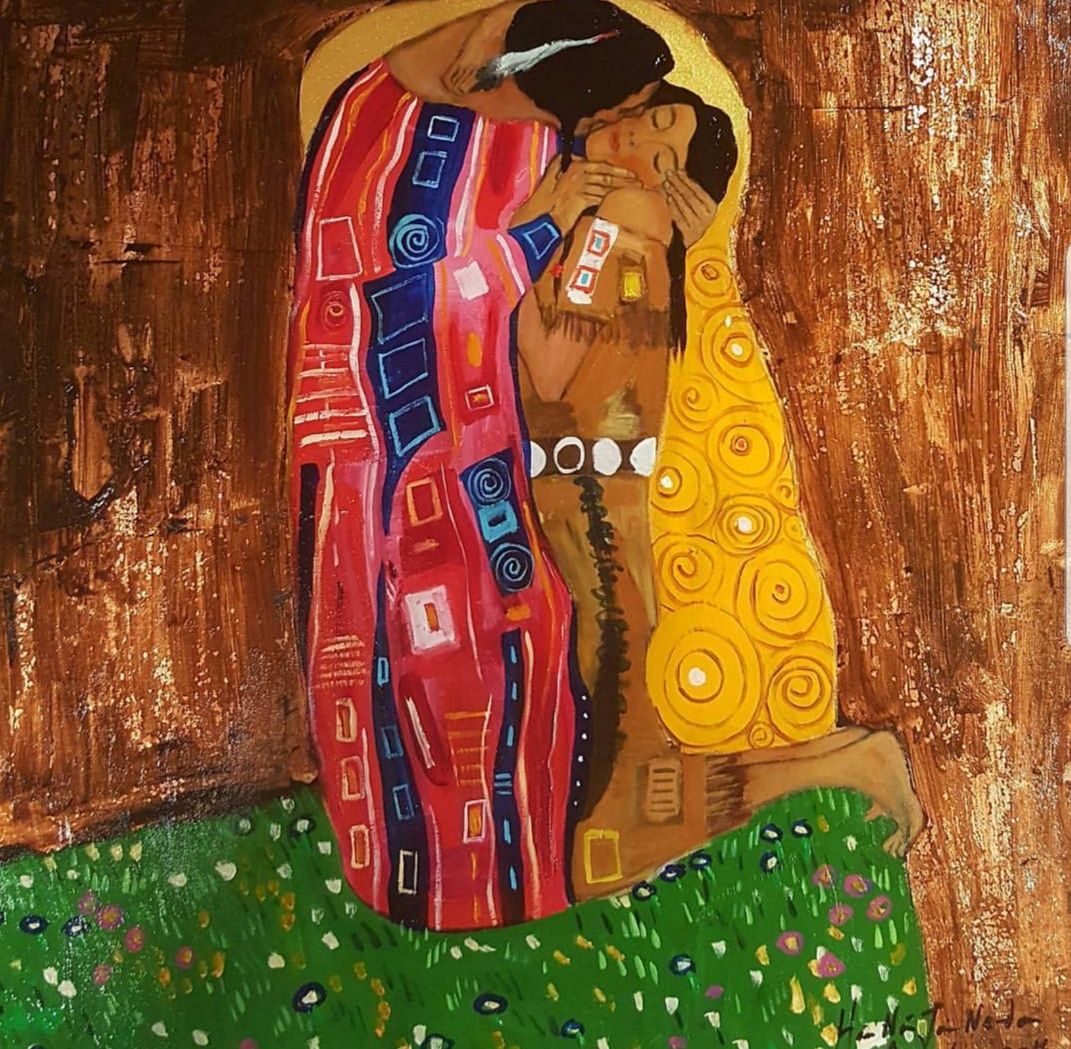 What are you trying to say by doing that?

There’s another piece I did, where there’s a television set with an Indian head test screen, [a test pattern that was used on television], and which I remember from childhood. For the piece I bought a 1950s TV, painted on canvas, and stuck it on there. There is so much that has been appropriated from us, for example when non-whites have used Native Americans as ads for cars and butter and sugar, or this Indian head test screen. Though my art, I’m doing what they did to us. Not only through this TV piece, but also in my appropriation of a Van Gogh or Picasso or Klimt, [in replacing their subjects with Native American subjects].

You said you do a lot of research to ground your work. Can you tell me more about that?

Artists are the historians of their time. I’m not living in a time when I am hunting buffalo or shooting at calvary. But you’ve got to know where you came from to know where you’re going. So I try to learn about the past, about the struggles of our ancestors, and then put that into my paintings. To give them a voice they didn’t have.

My cousin and I did a painting about the Sand Creek Massacre, [an 1864 event in which hundreds of soldiers in the U.S. Volunteer Army violently attacked a peaceful settlement of Cheyanne and Arapaho Indians, [leading to the deaths of 148 Native Americans and nine U.S. soldiers.] My painting is an image of a man cutting off a woman’s breast, entitled “Who’s the Real Savage?” 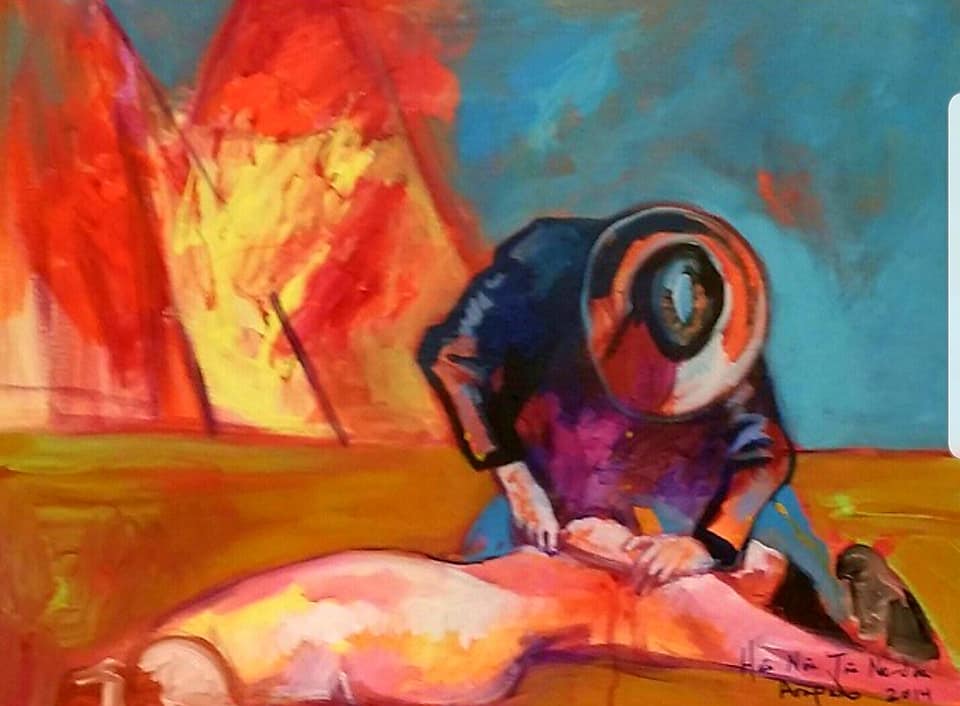 This image came from the testimony of Captain Silas S. Soule and Lieutenant Joseph A. Cramer, who went before Congress and said: This is what they saw. They said that after the Methodists killed Native American people they mutilated the bodies, cut off chunks of skin, breasts, penises, and vaginas, and wore it as trophies as they had a parade in downtown Denver.

My paintings are normally of everyday life. So when I was painting this, I’d break down and cry. I couldn’t believe you’d do that to another human being, that having already killed them, you’d embarrass them in death.

You paint these sometimes really disturbing scenes in lovely bright colors — why?

I like to use colors that are not normally used together, like pink and light green, to make it pop. But then after you see the colors and the actual image, you say, “Oh wow, he’s scalping a man or cutting off a breast.”

I’ve always been good with color, I studied it. I once read that if you ask 100 people to name an artist off the top of their head, 80 percent will name impressionist artists. People could name them because of the colors. It’s what keeps people captivated.

You have a very interesting piece that shows a Native American warrior looking at a painting of a woman in a museum. Can you explain what that’s about?

It’s called “Indian at the Museum.” The whole concept was to take a Native American from the Plains 150 years ago and put him in a museum setting to see how his culture is being portrayed by other Natives today. So it’s this beautiful man, this warrior, looking at a beautiful image of a pregnant lady by Native American artist T.C. Cannon. And perhaps he’s thinking: “Why is this glamorized now, when in my time I was ridiculed and my land was being taken away from me?” 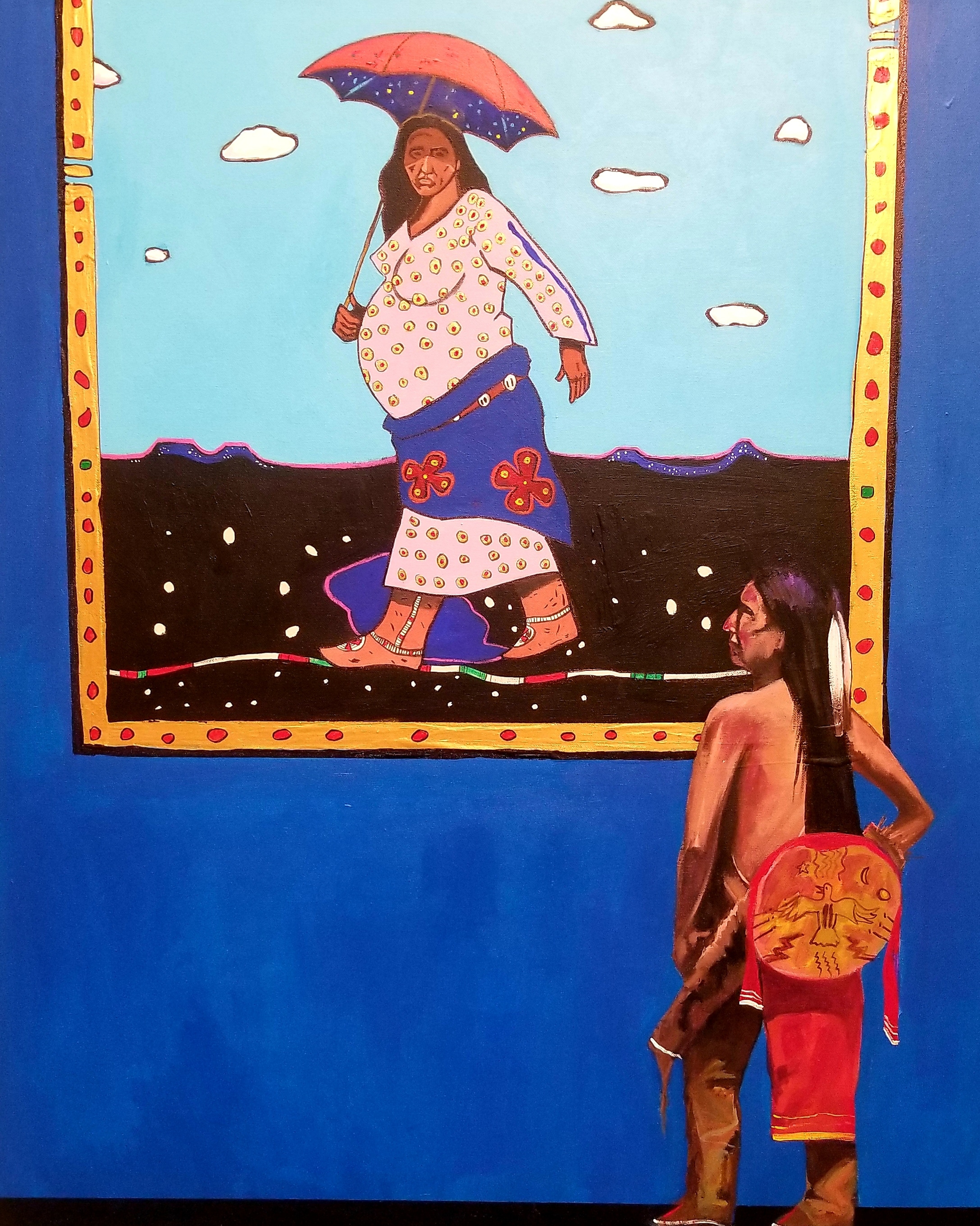 The first thing you do in art curriculum is nude drawing, of a live nude model. Because the human body is a work of art. A friend and I were talking once and he asked why Native Americans don’t do nude art. I’ve seen Native nude art, but it was done by non-Natives when they first came upon the Indians.

So I contacted artists I respect about doing a contemporary Native American art exhibit exploring nudity. I had some pushback and some support. Some said: “My tribe fought nude, and nudity wasn’t shunned.” Others said it was taboo, but I think that idea comes from assimilation, when Native people were taken away from their parents and put in Catholic boarding schools by the church. 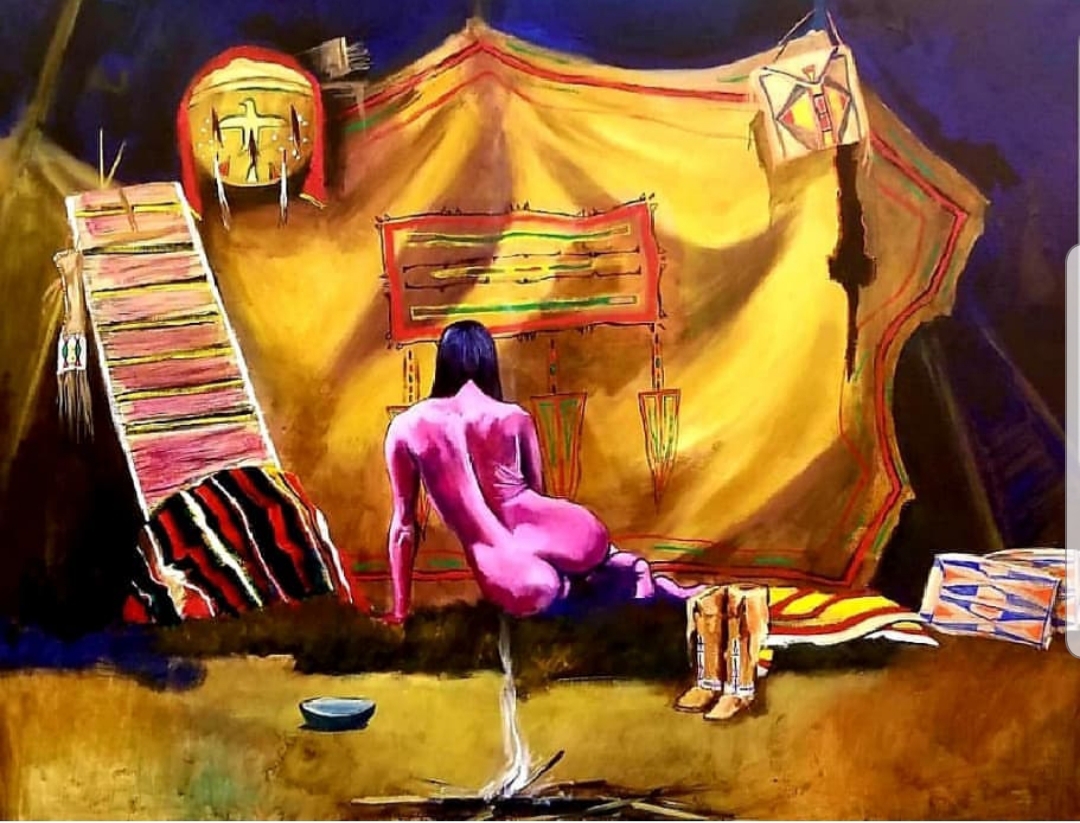 Is there one message you hope to get across in your paintings?

Often, when people are talking about Native Americans, they’ll say go to the National History Museum, as if we’re from the past. But in my art I’m trying to say: “We’re still here, we’re relevant.” And that you’ve got to know your history to know where we’re going.