Burnout is rampant among doctors and nurses. Can the arts help?

Some 20 years ago, pulmonologist Marc Moss was working in the intensive care unit when a patient went into cardiac arrest. Moss and others tried to revive the man, but he did not survive. As doctors often are, Moss was pressed for time and he asked several medical students to stay with the deceased patient and fill out the necessary paperwork so that Moss could return to another patient he’d been seeing. Not long after, he noticed one of the students crying.

“It’s sad,” she said. “Mr. Smith just died.” With dismay, Moss realized that he had already moved on emotionally after being present at a man’s death.

“I had depersonalized it,” he said. “It’s what we’re taught to do as doctors. It’s part of the way we were educated to deal with grief and tragedy.”

But even physicians need an outlet to express their feelings, and Moss believed there must be better ways for doctors to process the trauma they see and feel day to day.

The arts, he thought, could offer a way.

READ MORE: This mixtape project offers a “remedy” for the patient experience

For decades, art therapy has been used to help patients. But today, people like Moss are looking at how it can also help health care providers. It’s a shift that has come about out of necessity, experts say, because stress and burnout among doctors, nurses and other hospital staff has become a public health crisis.

Some 300 to 400 doctors kill themselves annually according to a study from 2003, a rate double that of the wider population. In 2009, Moss led a study of nurses at one Colorado university hospital and found that 86 percent met the criteria of having burnout syndrome and 22 percent had symptoms of post-traumatic stress disorder. In the same study, researchers found PTSD numbers for critical care nurses were comparable to those of war veterans who have come back from Afghanistan and Iraq.

Now, more research is emerging and being funded to show exactly how the arts can help health care professionals cope with or heal from trauma, process what they see, or become more empathetic clinicians.

At the University of Colorado Anschutz Medical Campus, where Moss is now head of the division of pulmonary sciences and critical care medicine, he is heading a new federally funded research lab that will look at how different art therapies can alleviate psychological stress in health professionals.

The university’s Colorado Resiliency Arts Lab, or CORAL, will test four programs in 2020 with the help of community partners. In one 12-week expressive writing program, health care professionals who work in critical care will be given an opportunity to express what they’re seeing at the hospital. The three other programs will test the effects of art, music and dance.

CORAL is one of a handful of labs being funded by the National Endowment for the Arts. Over the last several years, the NEA has increased its funding for studies on how the arts affect health outcomes because that understanding is greatly needed, said Sunil Iyengar, the federal agency’s director of research and analysis.

“Rather than just saying, ‘Let’s throw the arts at it,’” Iyengar said, the research aims to get a better sense of what specific art forms contribute to wellness and whether programs can be scaled.

What the arts can contribute, it turns out, is quite a lot. A 2010 review of the current literature found that music can reduce anxiety, the visual arts can put difficult-to-process experiences into words, dance can relieve stress, and expressive writing can lead to healing.

“The thing that kept me sane in surgical residency was going to English class.”

More recently, published research has looked at how art interventions can help health care professionals. A 2018 study in the Journal of General Internal Medicine concluded that students who engaged in the arts during medical school had higher levels of empathy and emotional intelligence, and lower levels of burnout. A study released this year in the Annals of Palliative Medicine found burnout decreased among palliative care providers when they read for pleasure.

The last study was led by urologist Daniel Marchalik, the medical director of physician well-being at MedStar Health, and a professor at Georgetown University. Six years ago, Marchalik started a dedicated “Literature and Medicine” track for medical students at Georgetown, which he thinks is the first and only one of its kind in the country. “The thing that kept me sane in surgical residency was going to English class,” he said.

As part of the Georgetown program, students read and discuss medical narratives by physicians, and also contemplate contemporary or timely fiction that has nothing to do with medicine – Toni Morrison’s “The Bluest Eye” and Sigrid Nunez’s “The Friend” are among the picks this year. Marchalik said fiction can provide doctors a form of escapism, but can also help them build empathy and avoid making quick judgments about patients, like those who don’t take their medication as directed.

“Literature forces you to enter a character’s point of view, and you have to occupy the space in someone else’s world,” Marchalik said. “There are so many perspectives and stories and histories that complicate that initial read you might get from a patient.”

The study of palliative care providers also found that literature can prevent the depersonalization Moss described in his story about “Mr. Smith.” Marchalik saw evidence of this in a “Literature and Medicine” student’s recent capstone project, which focused on the anatomy lab students take in the first year of medical school. Marchalik refers to anatomy lab as “the unofficial beginning of physician burnout.” It’s a stressful course, he said, “where you’re cutting apart a human being, that body is not alive, and so you’re very depersonalized right away.”

To counter this reaction, student Bethany Kette decided to write obituaries for the cadavers they worked on in the anatomy lab. She found it strange that students at Georgetown only learned two details about a body they would come to know intimately — the age of the person and their cause of death. At other schools, medical students learned nothing at all.

“The whole thing about being a doctor is knowing who the person is, their histories, and having that guide your practice. And yet we didn’t do any of that in anatomy lab, which is basically your first patient,” Kette said. “So I thought the obit could be a great idea, to know who these people really were.” 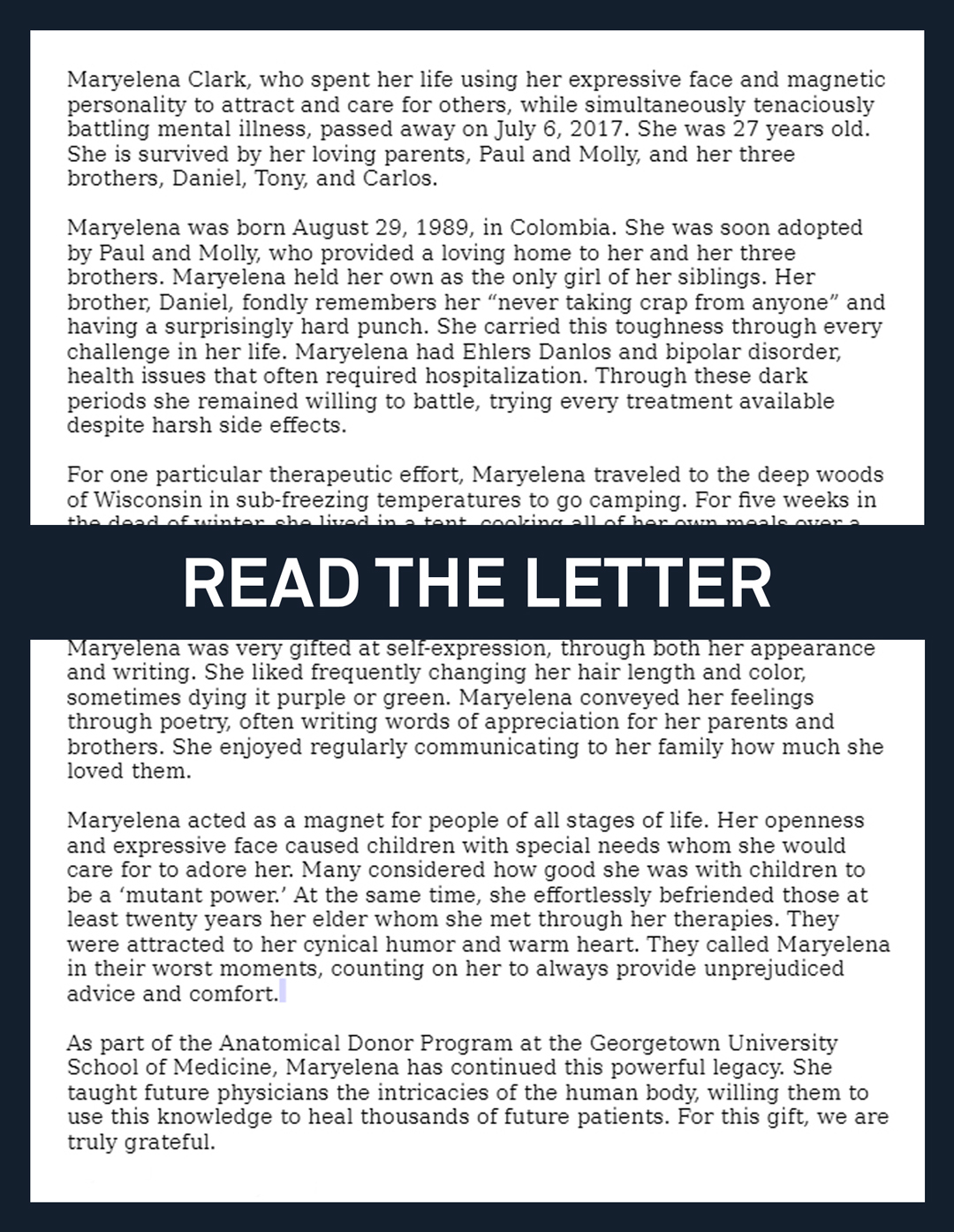 Maryelena Clark died in 2017. Georgetown University medical student Katie White wrote this letter about 27-year-old Clark, “who spent her life using her expressive face and magnetic personality to attract and care for others.” Clark’s family gave the PBS NewsHour permission to publish this letter.

Students called the friends and family members of the deceased person to find out more about them while they were alive: He was a water polo player, so that’s why he had really developed lungs. She had three children. He was the first person in the family to graduate from a certain school. It turned out Kette’s cadaver had once been a medical student at Georgetown just like her.

“It was a transformative experience for the students, because before that, it’s like you don’t even know what this is, or why you’re cutting a pelvis in half,” Marchalik said. “Now it’s become ingrained in the fabric of the school,” he said — students now write obituaries for their cadavers every year. 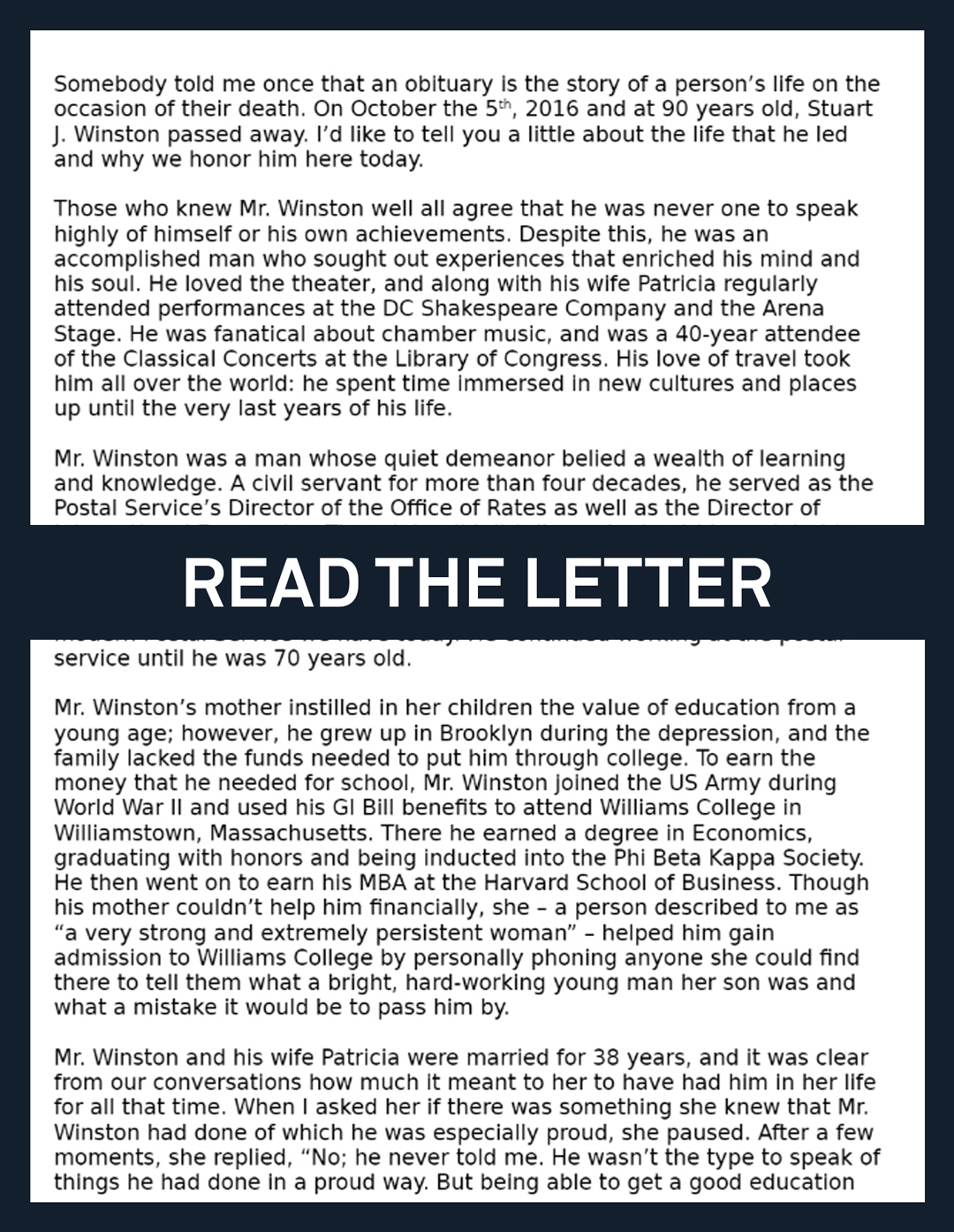 Stuart J. Winston died in 2016 at age 90. Winston “was an accomplished man who sought out experiences that enriched his mind and his soul,” wrote Georgetown University medical student Mario Giovacchini in this letter. Winston’s family gave the PBS NewsHour permission to publish this letter.

While Marchalik’s approach may be unique, there are now countless medical schools and hospitals offering other arts interventions to help both medical trainees and health care professionals.

In 2017, for example, Stanford Medicine hired its first ever “chief physician wellness officer”; its wellness program now offers writer workshops and ballroom dance classes. NYC Health & Hospital’s new Arts in Medicine program will introduce an arts observation program for clinicians to improve focus and active listening, as well as an initiative to help health care staff express their experiences and feelings through collage. The University of Chicago Medicine’s Healing Arts Program, which brings music and the fine arts to the medical campus, said it is considering new initiatives specifically to serve physicians and other staff, particularly in the realm of music, since so many have musical backgrounds.

Meanwhile, the Association of American Medical Colleges is currently working on a publication that will call on medical educators “to really integrate the arts and humanities into the curriculum across medical schools,” said Lisa Howley, an educational psychologist and senior director of strategic initiatives and partnerships at the organization. The AAMC represents every MD-qualifying school in the U.S., as well as some 400 teaching hospitals, and plans to release the publication late next year. With the burnout epidemic facing the field, it’s a matter of urgency, Howley said.

“Arts and humanities have been a part of physician education since Hippocrates,” she said, citing the ancient Greek physician and writer credited with the Hippocratic Oath. “What is new is the different way we’re focusing on it.”

Left: For decades, art therapy has been used to help patients. But today, doctors are looking at how it can also help health care providers. Illustration by Getty Images

Enriching the lives of Nashville seniors, one song at a time