These aren’t the spaghetti-and-red-sauce Italian dishes that many of us are familiar with. They’re in a different corner of Italian cuisine, one that stretches back hundreds of years to the establishment of the Jewish community in Rome. “Tasting Rome,” a new cookbook by Katie Parla and Kristina Gill, explores that history amid the larger picture of Roman cuisine.

“The way that Romans eat today is totally transformed from that uber-traditional, classic approach,” Parla said. “Rome, like all cities, evolves.”

In 1492, Jews fleeing the Spanish Inquisition arrived in Rome from Sicily and parts of Spain. Some continued their voyage to settle in the Balkans, but a small number settled in Rome. A unique local cuisine took root, formed by a combination of what was most readily available (bitter greens, artichokes), locally farmed (mackerel, sardines) and cheapest (poor cuts of meat, which took hours of simmering to soften).

The community’s palate diversified with the arrival of thousands of Jewish refugees from Libya, which became a hostile environment for Jews in 1967 during the aftermath of the Six-Day War with Israel. About 4,000 Jews left Libya for Rome, and in 1969, Qaddafi expelled Libya’s remaining Jews, growing the community in Rome.

This brought Libyan flavors and ways of cooking — new spices and filo dessert among others — into the Roman Jewish tradition, Parla said. These dishes “feel like they’re right off the page of a North African menu, and indeed they are,” Parla said.

Gill and Parla worked with this history to create a chapter in their book showcasing Roman Jewish recipes. Parla, who holds a Masters degree in Italian gastronomic culture, had studied Roman culture for years; for a previous project, Gill collected more than 100 recipes from taxi drivers who she met in Rome.

They wanted to “showcase the variety of flavors that are distinct to this community that you wouldn’t necessarily find in mainstream Catholic traditions,” Parla said. “The sweet and sour flavors, spiced desserts, the zucchini, in contrast to the mullet roe and bitter greens. There are these distinct flavors.”

You can find two of their recipes, both kosher for Passover, below. 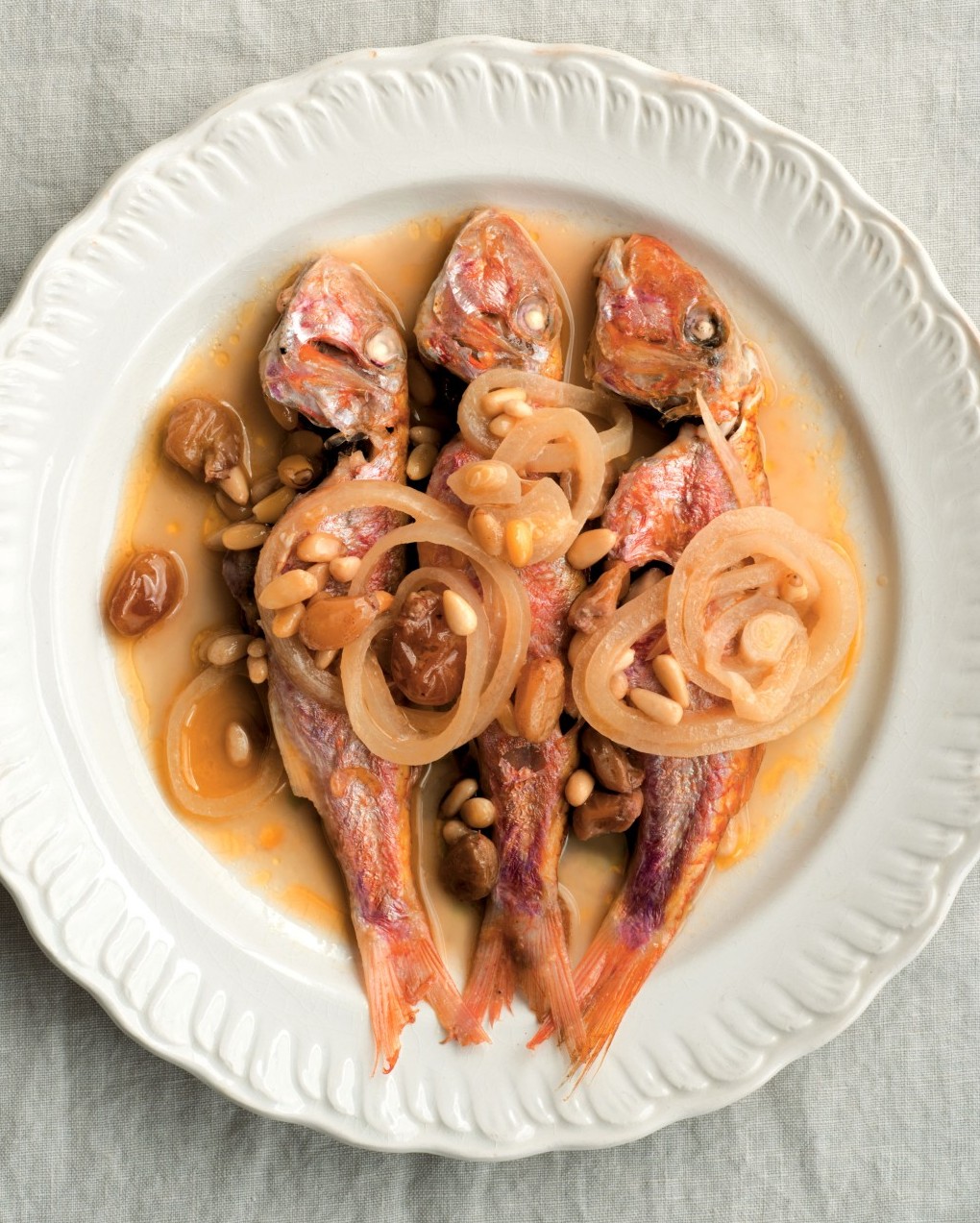 Red mullet with onions, pine nuts, and raisins
Serves 4 to 6

Heat the olive oil in a medium ovenproof skillet over medium heat. When the oil begins to shimmer, add the onions, season with salt, and cook until translucent, about 10 minutes. Add the pine nuts, raisins, vinegar, and 1/2 cup water. Place the fish on top and bring the liquid to a simmer.

Cover the pan and transfer to the oven. Bake for 10 minutes, then uncover and continue cooking until the fish is cooked through, 5 minutes more. Remove from the oven and serve warm.

Combine the garlic, mint, and vinegar in a medium bowl and set aside.

Line a wire rack with paper towels. In a medium frying pan or cast-iron skillet, heat 2 inches of neutral oil to 350°F. Fry the zucchini in small batches until golden brown or darker, if you wish, and transfer to the rack to drain. Season with the salt.

Add the zucchini to the vinegar marinade and toss to coat. Marinate in the refrigerator for at least 2 hours or overnight.

Serve garnished with additional fresh mint and drizzled with olive oil, on its own as a side dish.

Note: If the zucchini are very bitter, salt them in advance. Place the zucchini slices in a colander set over a bowl or over the sink and sprinkle with salt. Allow the slices to sit for an hour or two; some liquid will drain out. Rinse and pat dry before frying.