As images of singed koalas and wounded kangaroos spread around the world, crafters took up their tools to lend some comfort in the wake of historic and deadly Australian bushfires.

In one week, wildlife rescue facilities have been inundated with thousands of handmade animal rescue items — such as kangaroo and wallaby joey pouches, bird baskets and bat wraps — aimed at protecting and cuddling vulnerable wildlife. But some facilities receiving these items say the outpouring of generosity may not be serving the animals who need help.

It’s difficult to pin down an exact figure for the number of kangaroos, koalas, and other animals killed in the wildfires, but experts believe that hundreds of millions of animals have died.

In response to the crisis, stories of craftivism have made headlines. Sewists in Vietnam and Virginia have each sent dozens of pouches — a substitute for young marsupials who lost their mothers — not to mention the Icelanders who are knitting for the cause. A New York crafting store has also given part of its proceeds to help the rescue effort in Australia. 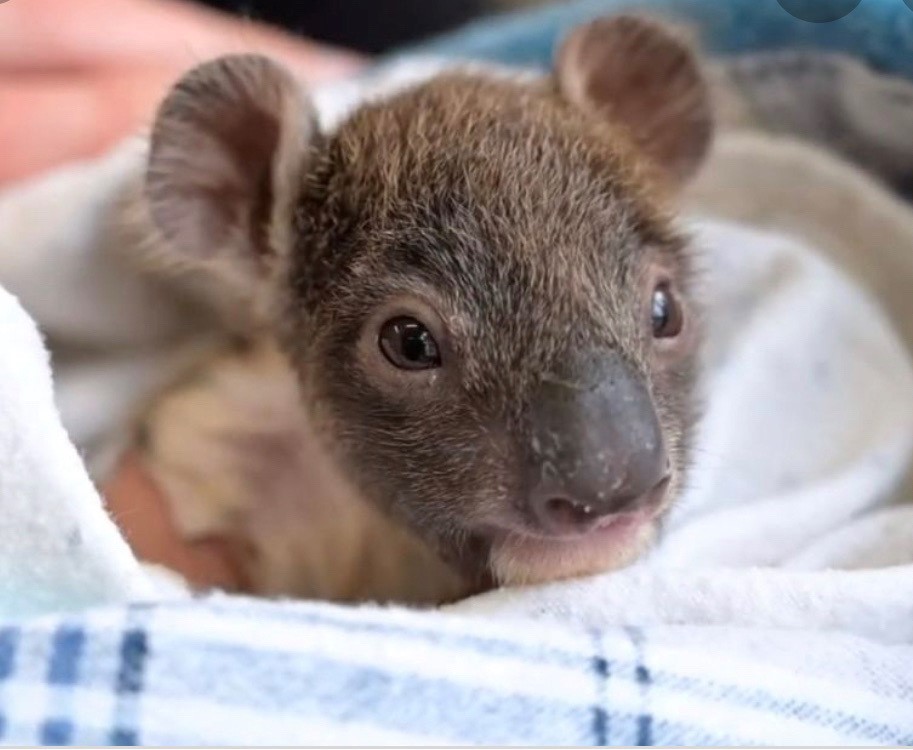 A rescued baby koala in a handmade pouch. Photo courtesy of Belinda Orellana

But while the international response has been overwhelming, some of the wildlife organizations who have been receiving these homemade items have expressed caution about them.

“There are already literally container loads of knitted items which can’t be used,” said Dr. Leanne Wicker, a senior veterinarian at Zoos Victoria in Australia, in an email to the PBS NewsHour. “The problem is that these are wild animals, not pets. They have very sharp claws even as young, and these get caught up in knitted fibres.”

Vets then are tasked with untangling the animals, “which is stressful and unnecessary,” she added.

“The problem is that these are wild animals, not pets. They have very sharp claws even as young, and these get caught up in knitted fibers.”

Over the weekend, the guild put a pause on the creation and distribution of these rescue items.

“The craft guild is NOT being shut down,” the guild wrote in a Facebook post. “We are taking a momentary break to stocktake our hubs, distribute items to the long list of rescue requests we have and organise properly what we need.”

Orellana confirmed to the NewsHour that the call for rescue items is “temporarily paused.”

The guild’s Facebook page started in April 2019 to create rescue animal supplies, such as dog and cat beds, on a local basis. Back then, only a handful of people were members of the Facebook group. With the start of the fires in November, that number grew to thousands, and is now approaching 225,000.

The guild uses Facebook to organize donations from around the world and then works with the Animal Rescue Collective, a rescue collective in Australia, to distribute bedding and other items as needed.

Even in their ask for donations, the guild stressed there was a lesser need for koala mittens because of the overwhelming amounts already received after early requests.

“The majority of groups and wildlife hospitals/facilities use veterinary bandages which allow [animals] to still use their claws, which is important to be able to grip onto the leaf to eat it,” said Karen Scott, president of the wildlife emergency service Wildcare Australia. “Unfortunately, donations of mittens were made not only to the groups that specifically use them, but to the many hundreds of other organisations that don’t use them.”

Meredith Ryan of FAWNA NSA (or For Australian Wildlife Needing Aid in New South Wales) pointed out other issues with handmade items that crafters may not be aware of, such as the difficulty in cleaning crocheted bird nests, the need for natural fabrics for some rescue items, and patterns that don’t properly replicate the wings of a mother flying fox. 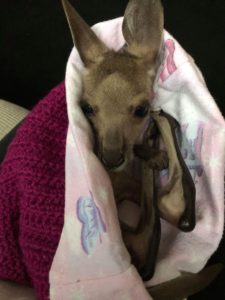 A pademelon joey in a crocheted pouch. Photo courtesy of Julie Anne Gugliotto

“The best outcome is to ask first and use only approved designs,” Ryan said. “There is an awful lot of waste because bad or unwanted patterns are out there on the internet. I could cry sometimes when we receive things made with love but not usable because of sewing method or fabric or size.”

Danielle Letourneau is a crafter in Maine and is the northeast regional coordinator for American Rescue Crafters, which works with the guild and other organizations for wildlife donations.

She said ARC had paused donations because “their hubs are full and they seem inundated.” But, she added, the organization will continue working with groups in Australia and plans on sending items as needed.

Not all of the donated handmade items sent to wildlife organizations are going to waste. Scott believes items such as joey pouches are still useful. But she urges crafters to first check with their local group about what they may need — if anything — and what specific pattern is preferred. “That way they will only make things that are needed and to their specifications,” she said.

Sydney-based fiber artist Jacqui Fink posted about the need for a response for the animals in November. There was a growing response to her post, and Fink herself has redistributed over 3,000 handmade items sent to her from Canada, England, Estonia, Germany, France and South Africa.

Fink said to “never underestimate a crafter” in a crisis.

“The antidote to despair is action, and while crafting is fun and functional, ‘craftivism’ is not a new concept,” she told the NewsHour. “You’ll find that most crafters will rise up in response to a call to action. They have big hearts and clever hands and love a challenge,” she added.

Left: A kangaroo joey is fed at the emergency response wildlife shelter in Mallacoota, Victoria, Australia. Photo by Tracey Nearmy/Reuters