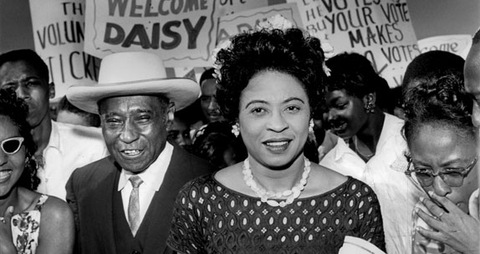 As a black woman who was a feminist before the term was invented, Daisy Bates refused to accept her assigned place in society.

In 1957, she became a household name when she fought for the right of nine black students to attend the all-white Central High School in Little Rock, Ark. Her public support culminated in a constitutional crisis — pitting a president against a governor and a community against itself. As head of the Arkansas NAACP, and protector of the nine students, she would achieve instant fame as the drama played out on national television and in newspapers around the world. But that fame would prove fleeting and for her attempts to remain relevant, she would pay a hefty price.

Daisy Bates was not born to make history. The product of a segregated Arkansas sawmill town, she was black, illegitimate and self-taught after the eighth grade. Her early life was scarred when she discovered that the couple that was raising her was not, in fact, her parents. Her biological mother had been raped, murdered and dumped into a local pond by white men. Fearing for his life, her father gave her away and never reclaimed her.

Throughout her life — even at the height of her acclaim — Daisy Bates would know loneliness and a feeling of being on the outside looking in. It was a feeling that drove her relentlessly — to take up with a married man as a means of escaping the circumstances of her birth, to constantly push herself and those around her, to ignore her fears and doubts, to never let friends or enemies see her in pain and to always present an air of composure, sophistication and glamor even when her life was falling apart.

Today, Daisy Bates’s contributions — first as a newspaper publisher in Little Rock and then as head of the Arkansas NAACP — remain little recognized outside of Arkansas. In the 1980s, when Henry Hampton was filming his landmark series, “Eyes on the Prize,” Bates had been silenced and nearly crippled by a series of strokes. She was never able to tell her own story on film.

So questions persist: What motivated her? Was she a self-sacrificing heroine or an opportunist driven by a need for validation? As state president of the NAACP, she supported a policy that put teenagers on the frontlines of the school desegregation battle — but was that policy morally right? What price did the Little Rock Nine pay for that decision? What does her story tell us about the place of feminism in the civil rights movement? After all she did, why was Bates never fully embraced, even within the Little Rock community?

Sreenivasan spoke with La Cruise about the challenges of telling the story of a complex, unconventional and largely forgotten heroine of the civil rights movement:

Cross-posted with permission from ITVS