David Bowie made androgyny cool, and it was about time

Androgyny doesn’t get a lot of style icons.

That’s what I thought when I first saw the news that David Bowie had died. Bowie meant so much to so many, but for a number of people who have fought to subvert gender binaries and resist labels in a world that demands them, he made self-acceptance fashionable.

When Bowie arrived on the music and theater scene in the 1960s, androgyny was just beginning to achieve recognition as a mode of fashion. Unisex clothing came to popularity in the 1960s, reacting to and re-calibrating the strict gender roles that had defined fashion in the 1950s.

For a brief time, mostly in 1968, unisex was everywhere, and with it came a fair amount of confusion in the media. “It’s not just the way we look; the whole male-female relationship is confused,” columnist Everett Mattlin wrote for the Chicago Tribune in 1968. “In novels, plays, movies, TV — all, presumably, reflecting life itself — men are weak, fumbling, impotent, while women are strong, decisive, domineering … All is topsy-turvy in a neuter world.” He concluded, though, that moving away from traditional gender roles could eventually create a “healthier climate.”

Meanwhile, a young David Bowie was questioning the gender norms that had previously dominated style. In a 1964 television interview, he appeared as a spokesperson for the group “Society for the Prevention of Cruelty to Long-Haired Men,” defending his choice to style his hair long.

As unisex style faded, androgynous style began to take its place, refining and elaborating on the concepts that unisex style had sought to introduce. Between Twiggy’s pixie cut and Yves St. Laurent’s 1960s menswear-inspired jackets for women, androgyny was becoming a fashion force in its own right. 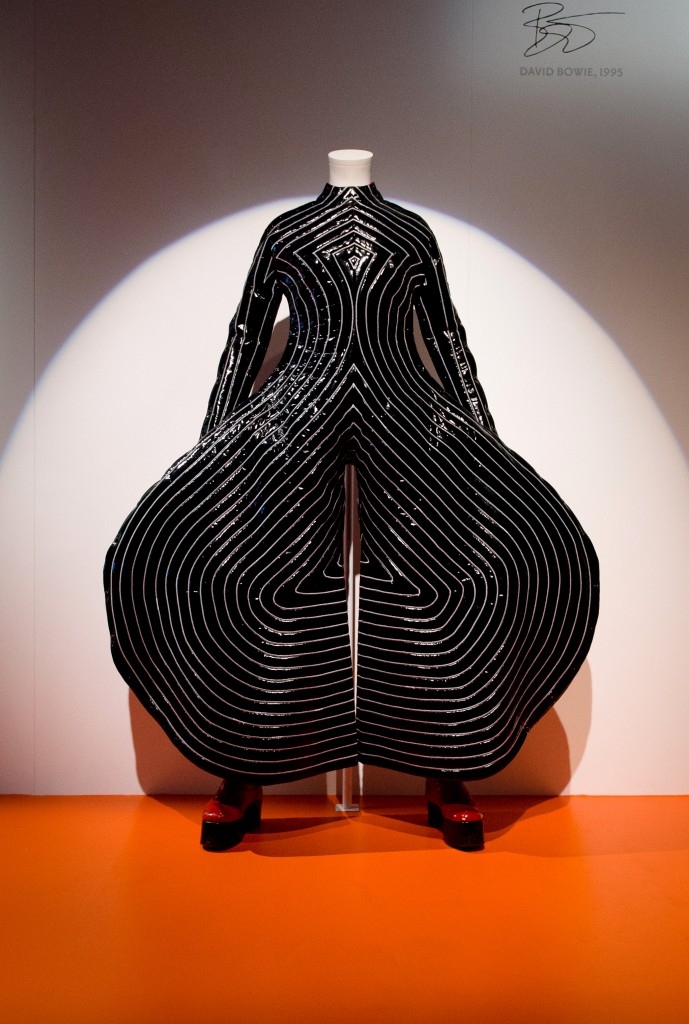 The “Tokyo-Pop” bodysuit worn by musician and actor David Bowie on the “Aladdin Sane” tour is displayed at the Victoria and Albert museum in London on March 20, 2013. Photo by Leon Neal/AFP/Getty Images

Early in his career, Bowie was experimenting with theatrical makeup, dramatic hair and groundbreaking styles. His earliest theatrical appearance was as a mime in “Pierrot in Turquoise” in 1967 at the Oxford New Theater. Bowie’s style was at once theatrical, androgynous and hyper-sexual, a revolutionary combination in a climate where gender was still understood as a strict binary.

Bowie exuded sexuality, both when he subverted gender signifiers — as in the cover of “The Man Who Sold the World,” in which he donned long hair and a dress designed by British fashion designer Mr. Fish — and when he eschewed them entirely in looks like “Tokyo Pop,” designed by Kansai Yamamoto for the Aladdin Sane tour (1973), in which he and fashion merged to become a genderless sculpture.

“I want to tart rock up,” he told John Mendelsohn of Rolling Stone. “I don’t want to climb out of my fantasies in order to go up on stage — I want to take them on stage with me.” 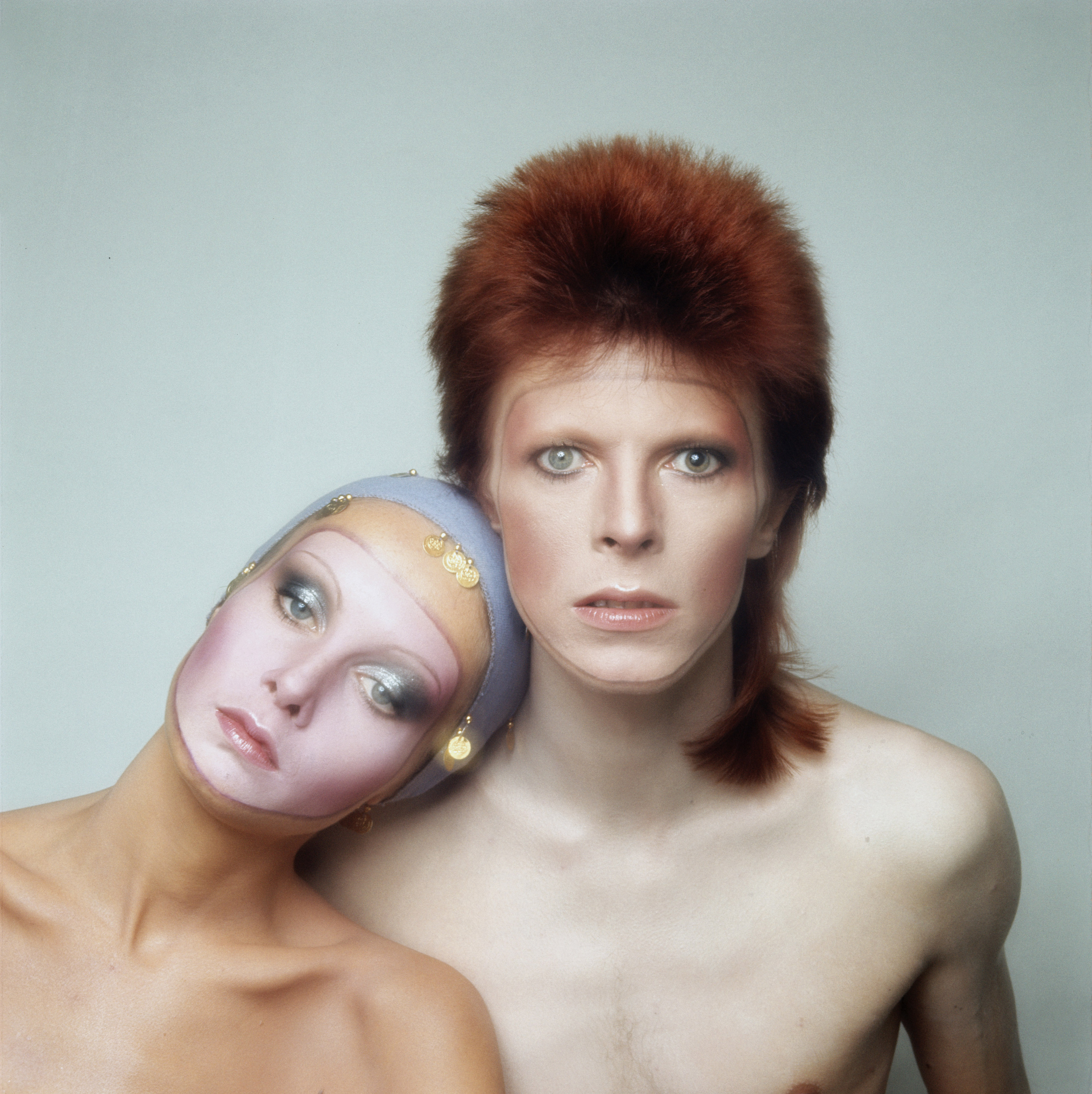 English model Twiggy poses with David Bowie in Paris for the cover of his “Pin Ups” album in 1973. Photo by Justin de Villeneuve/Hulton Archive/Getty Images

In 1972, Ziggy Stardust, Bowie’s alien androgynous alter ego, came onto the scene with a red bob, a tight striped body-suit and a constant swagger, becoming a queer icon. That same year, Bowie told journalist Michael Watts that he was gay, only five years after being gay had been decriminalized in Britain, and while articles with headlines like “Is Gay A ‘Security Risk’?” were appearing in The New York Times.

(With that, I should say that Bowie never laid out any definitive labels for his gender or sexuality. He walked back his statement to Watts by telling Playboy he was bisexual in 1974, then later in Rolling Stone he declared he had been heterosexual all along. But he never owed us an explanation. He gave us what he wanted to give: a style, a way of living.)

His style did not find an immediate audience, entering pop culture at a time when androgyny was still transgressive to many people, which Carolyn G. Heilbrun pointed out in a 1973 article for The New York Times. “The idea of androgyny apparently takes a little getting used to. First responses tend either toward bewilderment or hostility,” she wrote.

“Ziggy Stardust” the album was garnering praise, though whether that was because or in spite of Bowie’s style was up for debate. Richard Cromelin at Rolling Stone positively reviewed the album, while warning that he would normally be put off by Bowie’s style. “We should all say a brief prayer that his fortunes are not made to rise and fall with the fate of ‘drag-rock’ syndrome,” he wrote. That “syndrome,” he wrote, had affected everyone from Hollywood down to the “grotesqueries” of Queen, who he called a “trio of feathered, sequined Barbie dolls.”

Bowie’s style as Stardust was the height of camp androgyny, one that he had created with inspiration from the costumes in Stanley Kubrick’s 1971 film “A Clockwork Orange.” Bowie took Kubrick’s vision of a nightmare future world and imbued it with confident sexuality, picking out “bright, quilted kind of materials, and so that took the edge off the violent look of those suits,” he said in “Bowie Style” by Steve Pafford. “It all fitted in perfectly with what I was trying to do, create this fake world, or this world that hadn’t happened yet.”

In 1973, the cover of “Aladdin Sane” showed Bowie’s iconic lightning-bolt face makeup just as androgynous fashion began to reach more people than ever, appearing in Diane Keaton’s style for “Annie Hall” (1977) and “Manhattan” (1979). Meanwhile, the rise of MTV meant that Bowie had a wider audience than ever, including for “Ashes to Ashes” (1980), the iconic video that saw Bowie dressed as Pierrot in a silver-blue costume that appeared to drip with fabric icicles.

In the past 10 years, designers from Miu Miu to Givenchy have released designs drawn directly from Bowie’s album covers and videos. His 1973 bodysuit was inspiration for Jean-Paul Gaultier’s Spring 2013 show.

Throughout his career, Bowie never stopped showing us that androgynous was cool, that gender lines were unimportant in the face of a strong personal style. Designer Raf Simons told Vogue last year that Bowie’s constant reinvention was an inspiration to him. “He’s a chameleon, able to reinvent himself,” Simons enthused. “But he’s also the materialization of something else. More than a man — an idea.”

Left: David Bowie performs live on stage at Earls Court Arena on May 12, 1973, during the Ziggy Stardust tour. Photo by Gijsbert Hanekroot/Redferns