Miss Dunn’s eyes appear to be closed — or at least busy reading the newspaper in her hands. Standing out against a simple yellow background, her red-striped dress mirrors the lines of the broadsheet she holds. We don’t know who she was, but in the 1930s, she was important enough to a 12-year-old child to be immortalized in her own painting.

“Portrait of Miss Dunn” is one of 12 paintings on view now in “From the Perspective of a Child,” an exhibit at the Children’s Museum of the Arts in Manhattan as part of this year’s Outsider Art Fair.

All of the paintings were done by children at community art centers in New York City during the New Deal era. These centers were opened under the Federal Art Project — a unit within the Works Progress Administration — which sought to help employ and support artists during the Great Depression. The government-sponsored art program provided free art classes to children and adults at more than 100 community and federal art centers across the country that were created under the initiative. 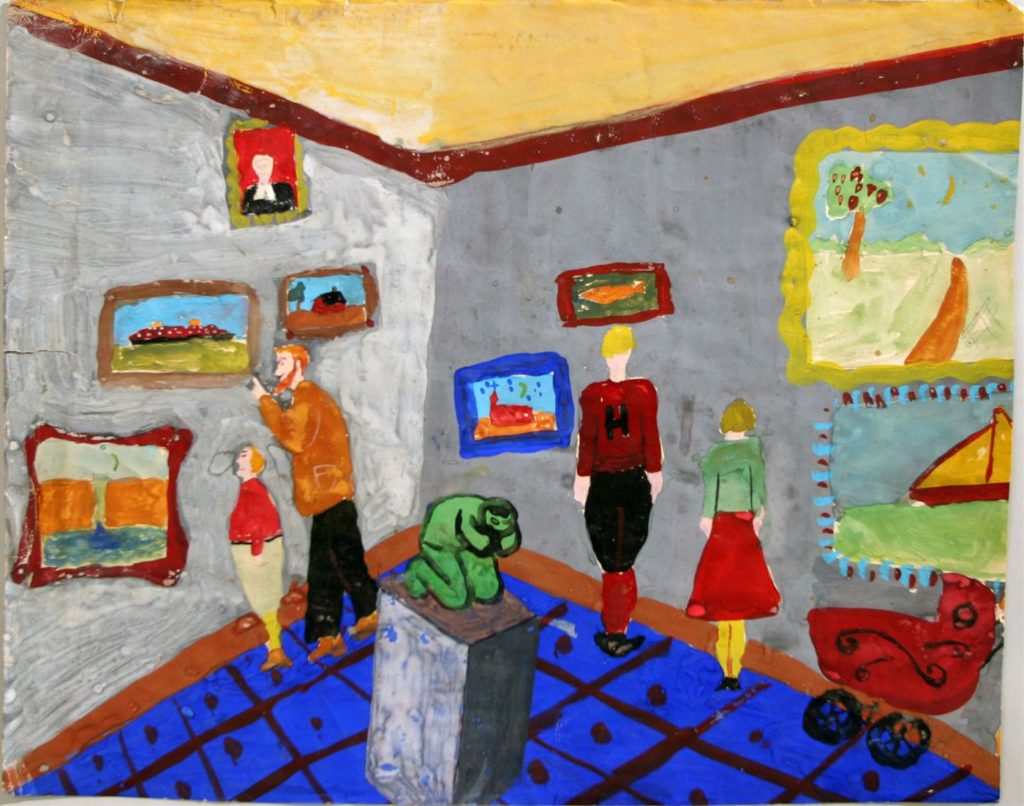 An untitled painting by Maria Ingiotti. Photo courtesy of Children’s Museum of the Arts Permanent Collection

Lucy Menga was the young artist who painted the portrait of Miss Dunn, but CMA curator and artistic director Jil Weinstock said the museum was unable to get in touch with Lucy or any of the other children, who would now be likely in their 90s. (In at least two of the paintings, you can see “age 9” faintly written next to the young artists’ names.)

At the time, community access to the arts had dried up. Art programs were being shut down and schools weren’t filling in the gaps, Weinstock said.

“There’s a lot of correlation to what’s happening now in education as well, where the first funding that gets cut are the arts,” she said.

The paintings act like “time capsules” that capture details of New York life from nearly a century ago, Weinstock said. Unlike other famous examples of WPA art of the day, these offer a look through the eyes of children. 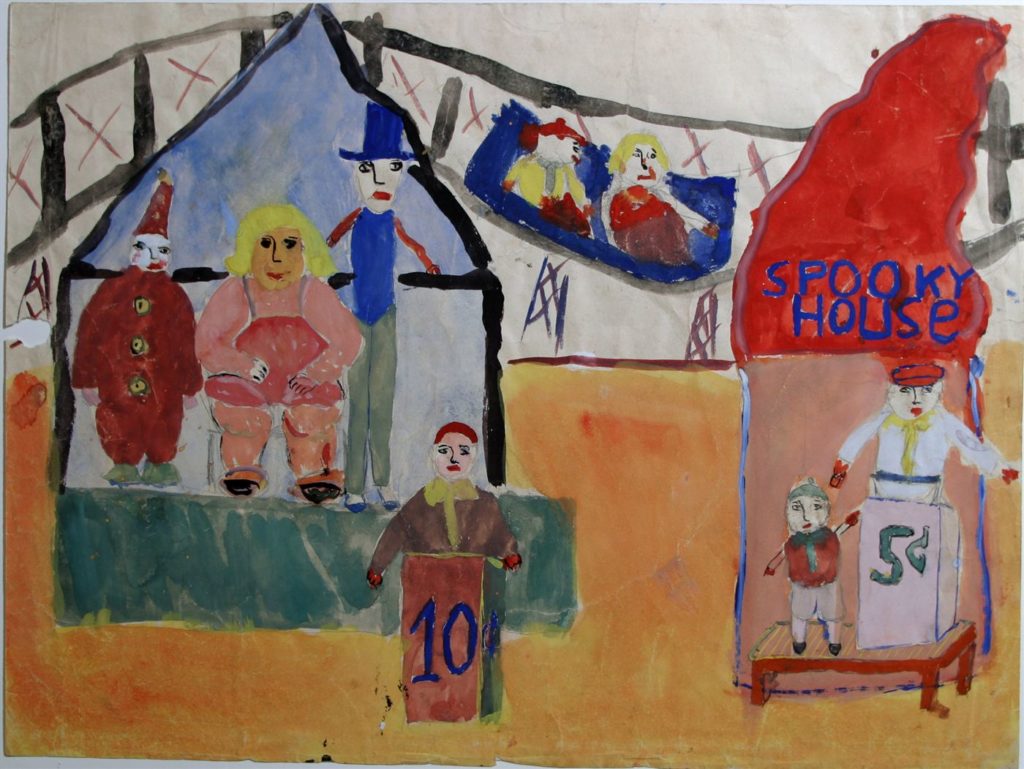 An untitled painting by Hilda Covit. Photo courtesy of Children’s Museum of the Arts Permanent Collection

The carnival scene in Hilda Covit’s painting pictures a clown dressed in red, a roller coaster and a 5-cent admission to a “Spooky House.”

Maria Ingiotti’s painting is a scene inside an art museum, complete with a statue of a green figure kneeling on a pedestal, where patrons (and presumably a baby in a carriage stroller) are looking closely at paintings. 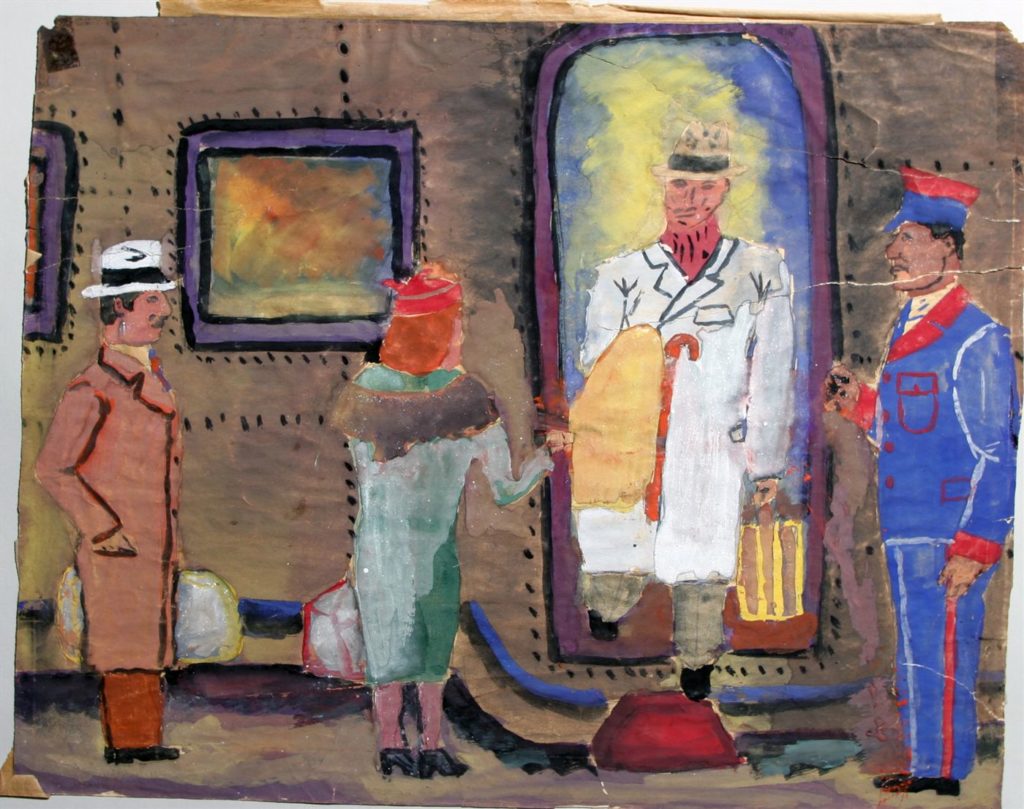 An untitled painting by Walter Gosk. Photo courtesy of Children’s Museum of the Arts Permanent Collection

The people outside a train car in Walter Gosk’s painting each have a sartorial pop of color: a white fedora, a red pillbox hat, an orange cane, and a conductor in a striking blue and red uniform.

The child artists might have not had a command of technique and style, but there is still so much detail in the paintings, Weinstock said. To her, these visual clues are a way of “marking time,” adding that when children today look at these paintings, they may feel “old-timely,” but simultaneously familiar.

Weinstock said that sense of history allows for an “understanding on how we’ve made changes. We’ve grown. Things are different. How are they different? They’re different, for the better or for the worse?”

“I think that’s really what’s so powerful when you look at any of these pieces as an archive,” she said.

The artist as a social worker

The Federal Art Project, in one sense, was work relief for thousands of unemployed artists struggling amid the depression. It was the largest arts program under the WPA, commissioning thousands of works of public art, paintings, sculptures, prints, among other artistic pursuits, from as many as 10,000 artists. 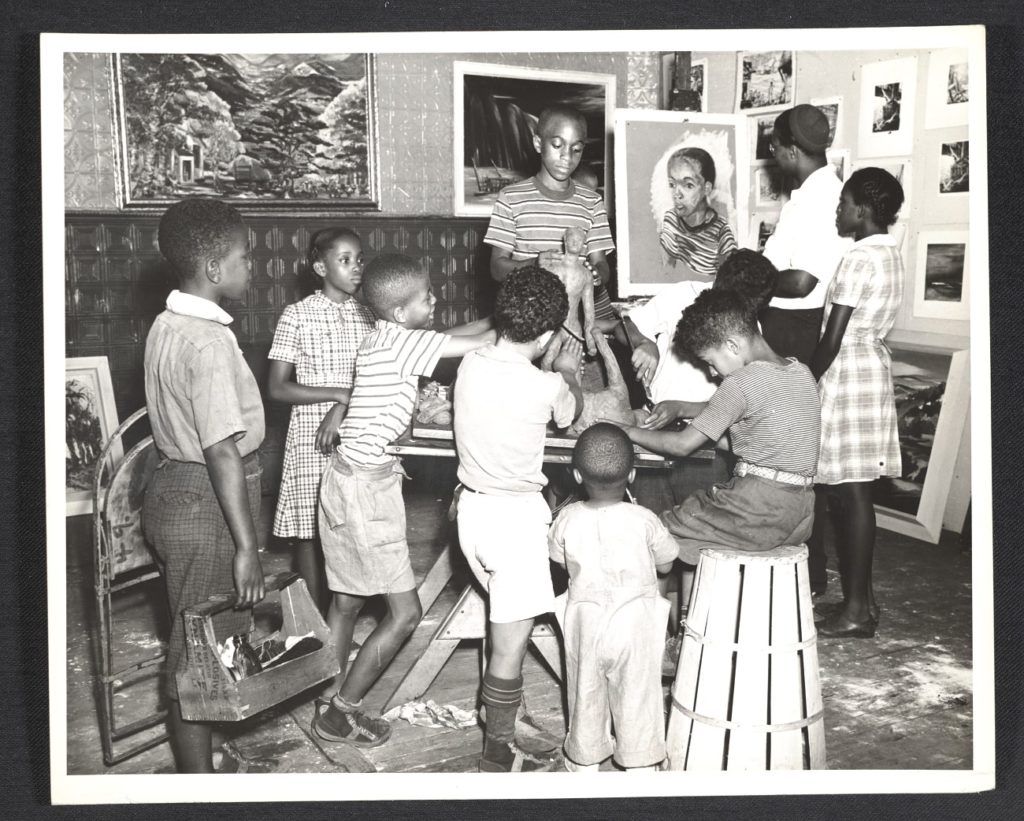 In another sense, the program was a mission to combat what its only director, Holger Cahill, described as “cultural erosion.”

“We have helped to push art from its honorable place as a vital necessity of everyday life and have made of it a luxury product intended for the casual enjoyment of jaded wealth,” Cahill is quoted as saying in The New York Times in 1937. “And wealth has practically stopped demanding the product since the great depression.”

In the Times, Cahill also lamented the ways American society had “subordinated art.” He pointed his finger at changing technology and a corrupting materialism, while having a few choice words about the art world, blasting the “whims of social snobbery” and the “erratic interests of dilettantism.”

Cahill instead wanted the arts to be accessible. And over the course of its eight-year existence until 1943, the Federal Art Project founded 103 community art centers that pursued that goal, according to an oral history with Cahill. 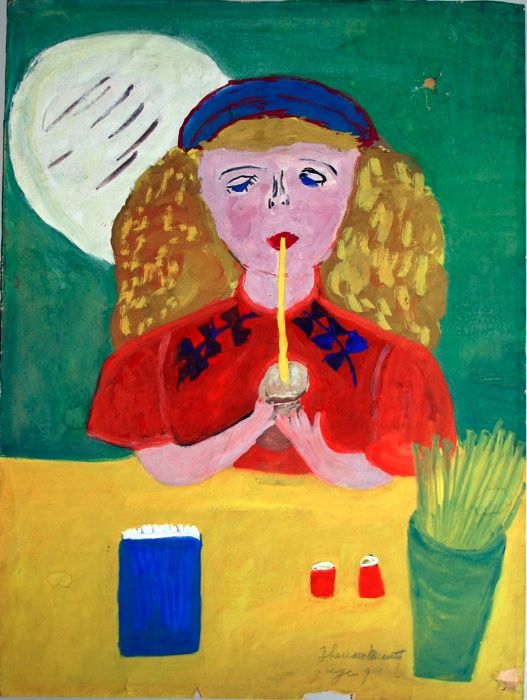 An untitled painting by Theresa Messett. Photo courtesy of Children’s Museum of the Arts Permanent Collection

Artists often led classes of various mediums — painting, sculpture, theater — for adults and children at these centers. In an account of Cahill’s early years, historian Wendy Jeffers wrote how artist George Biddle described the FAP director as being “guided by a passionate belief in American art and a love of its folklore.”

Irving Marantz, a painter and sculptor, spent four years teaching art classes under the FAP. In a 1973 essay, he wrote that there was significant “social work” in the teaching work, and cited some of the children in his classes who struggled with behavioral issues “because their family surroundings and social environment [had] made them so.”

Art, then, was a “great therapy” that could help the children he grew to know in his classes “into useful social beings, often into sound craftsmen, and even sometimes into distinguished artists,” he wrote.

How these paintings resonate now

What the children from 1930s New York decided to paint — and which details they chose — are curious windows into what stood out or even brought delight during a time of national hardship. 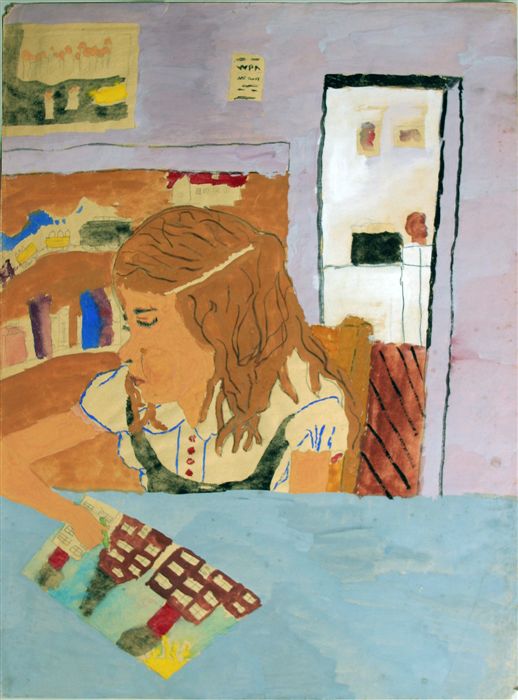 An untitled painting by Arnold Shickman. Photo courtesy of Children’s Museum of the Arts Permanent Collection

The man in Frank Fulliran’s portrait — titled “The Portrait of an Irishman” — has shamrocks on his lapel and in his hat. It’s not immediately clear what the girl or woman in Theresa Messett’s painting is drinking, but it looks like you could be sharing the table with her at a restaurant. And in a meta moment in Arnold Shickman’s painting, a “WPA” flyer hangs on the wall while a girl draws a city skyline — a direct, visual reminder that the painting exists in part because of the government funding the initiative.

The exhibit is the museum’s first curated show of its Kuniyoshi collection at an art fair. The 19 paintings that make up the collection were gifted to the museum decades ago by the widow of Yasuo Kuniyoshi, an artist who had immigrated to the U.S. from Japan in 1906, when he was 13 years old.

Like his contemporaries employed by the FAP, Kuniyoshi taught art classes to children in New York during the 1930s, but museum officials are unsure whether he specifically taught any of the children whose works are featured in the show.

At the four-day Outsider Art Fair, children’s artwork is juxtaposed with work by adults.

This comparison “creates not only a wonderful dialogue about what the work is about and what they’re each perhaps thinking,” Weinstock said, but also help young people see that “their visual language is powerful.”

That visual language, Weinstock said, can also help children “communicate things that might be too hard to talk about or write about.” 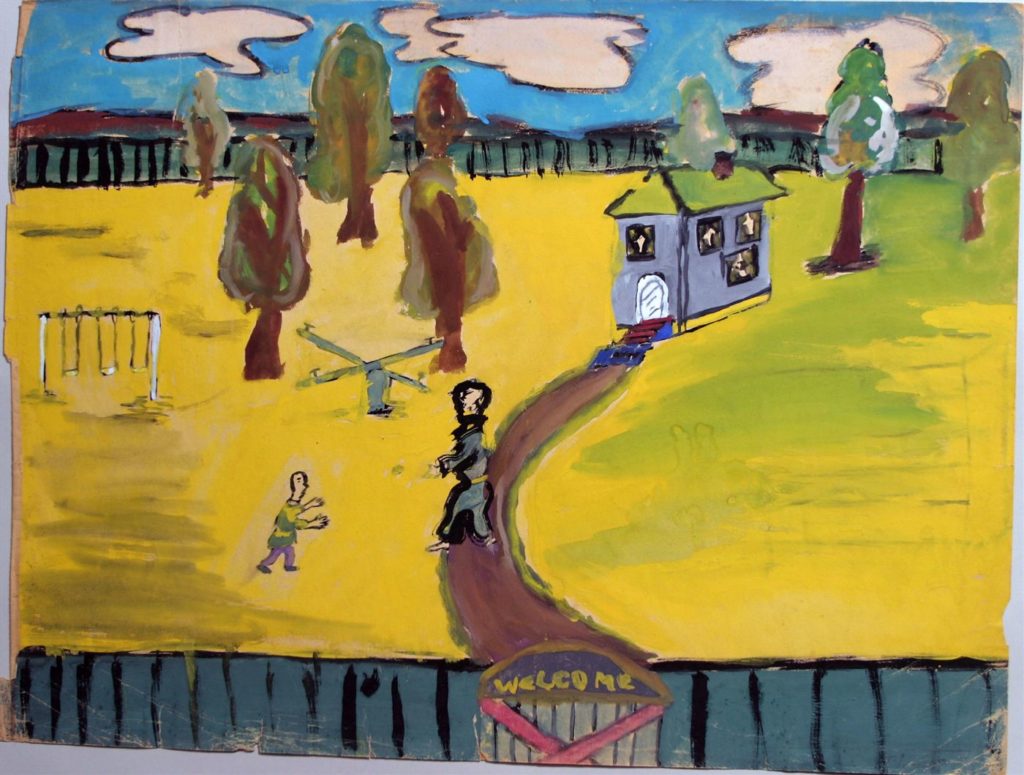 An untitled painting by George Pettus. Photo courtesy of Children’s Museum of the Arts Permanent Collection

Several of the paintings take a pleasant, appreciative view of everyday life. Gerald Repp meticulously depicted the signs and labels — “Dan’s Moving Van” written in white letters — in his cityscape, where people mill about with umbrellas and top hats. Vincent Cuttillo’s serene scene has a hammock and a patch of white flowers.

And, in George Pettus’ painting, an adult and a child look like they’re about to embrace. It’s an inviting image with swings and see-saws in the background and a gate adorned with a sign in all caps: WELCOME.

READ MORE: This artist wants to help you think about your place in the world