Our April book club pick for Now Read This, the PBS NewsHour’s book club with The New York Times, is Julia Phillips’ “Disappearing Earth,” a novel about a community’s reckoning with the sudden disappearance of two young girls.

Set on Russia’s Kamchatka Peninsula, a region where social and ethnic tensions have long shaped the lives of the residents there, Phillips’ novel follows a cast of characters who are connected by the crime.

The mysterious disappearance of the Golosovsky sisters one summer day ignites an onslaught of media attention that lays bare the broader tensions, particularly for women who feel their struggles have not been given equal notice. 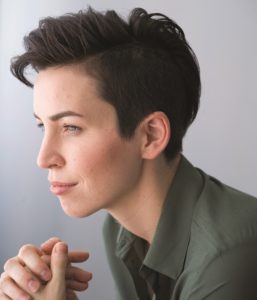 In a book review for The New York Times, writer Ivy Pochoda praised Phillips for bringing “a cartographer’s precision and an ethnographer’s clarity” to her descriptions of Kamchatka, as well as weaving together stories of women who are “are fragmented personally, culturally and emotionally not only by the crime that jump-starts the novel, but by place, identity and the people who try, and often fail, to understand them.”

Phillips spent time in Kamchatka on a Fulbright scholarship in 2011, and studied the Russian language for years.

“Disappearing Earth” was named one of The New York Times’ 10 Best Books of the Year and as a finalist for the National Book Award, the National Book Critics Circle John Leonard Prize and the Center for Fiction First Novel Prize.

Phillips will join us at the end of the month to answer your questions about “Disappearing Earth.” We hope you’ll read along.