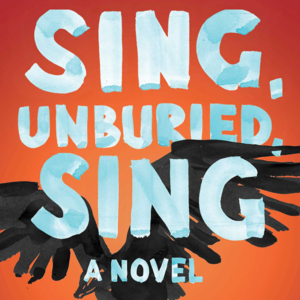 Jesmyn Ward’s novel “Sing, Unburied, Sing” is our first pick for the new PBS NewsHour-New York Times book club, “Now Read This.” Become a member of the book club by joining our Facebook group, or by signing up to our newsletter.

Below are questions to help guide your discussions as you read the book over the next month. The questions are broken down by week, or divided into four parts to match your reading speed. You can also submit your own questions for Ward about the book here.

1. The first line comes from the point of view of Jojo, who says, “I like to think I know what death is. I like to think it’s something I could look at straight.” Why are these two things important to Jojo, and why do you think Ward chose to start the book this way?

2. Tracy K. Smith, in a New York Times review of the novel, says of the fictional town Bois Sauvage, Mississippi: It “is as mired in its own history as, frankly, most real places in America.” It’s a history that includes violence and ever-present racism. What do you think Ward wants us to understand about that history? How much has changed, or how little?

3. Early on in the book, Leonie insists on taking her children on a road trip to pick up their father Michael from Parchman prison. Why must she bring her children? What is it that you think brought Michael and Leonie together initially, and what is it that pulls them apart?

4. Leonie’s neglect and indifference of her children is present throughout the novel. Why does she treat them so poorly? Is it simply that her love for herself gets in the way, as Mam says, or is it more complicated than that? What role does her grief play in how she parents?

5. In October, Ward told the NewsHour’s Jeffrey Brown that the use of the supernatural in a novel “has to make sense. It has to be believable.” Did you find the ghosts believable? And why do you think they play such prominent characters in the novel?

6. Pop’s stories often involve the ghost of the young boy, Richie, but he rarely speaks about his own deceased son. Is the fixation with one related to the other? What does it tell us about Pop and his own grief?

7. Leonie describes her friend Misty, who is white, this way: “Her freckles, her thin pink lips, her blond hair, the stubborn milkiness of her skin; how easy had it been for her, her whole life, to make the world a friend to her?” What do you make of how Leonie perceives Misty?

8. At one point in the novel the ghost of Richie says he assumes Parchman prison, which long operated like a plantation, must have changed over time. But when he returns, he describes the “new” Parchman as a place where men sit “for hours in small, windowless rooms staring at big black boxes that streamed dreams.” Is it significant that Parchman has not changed for the better?

9. The book follows three generations: Mam and Pop, Leonie and Michael, and Jojo and Kayla. Which generation do you find yourself understanding and empathizing with the most? Which characters did you find it harder to connect with and why?

10. The novel is told from multiple characters’ points of view: Jojo, Leonie, Richie. Why do you think Ward chose to tell the story from these voices, and why do you think the other characters don’t serve as narrators: Mam, Pop and Michael, for example?

11. As you near the end of the book, why do you think Ward chose the title “Sing, Unburied, Sing”?

12. One of the epigraphs of the book is this line from Southern Gothic writer Eudora Welty: “Memory is a living thing,” she writes, and that “all that is remembered joins, and lives — the old and the young, the past and the present, the living and the dead.” How did this statement on memory echo throughout the novel?

13. Why do you think Ward chose to end the book with the tree of ghosts and young Kayla telling the ghosts to “go home”?