An intimate portrait of black fatherhood in East New York

As thousands of people in cities across the U.S. took to the streets in recent years to protest the police killings of black men — most recently for Keith Scott and Terence Crutcher — photographer Phyllis Dooney noticed something missing.

In all the media coverage of these killings, “there’s so little mention that these guys are fathers,” she said.

Dooney said that omission is the result of a racially-charged stereotype of black fathers as neglectful. But that stereotype does not account for the complex social effects of mass incarceration, the War on Drugs and other events that have disproportionately affected black families. She decided to document their stories in East New York, a Brooklyn neighborhood that lies between the southernmost reaches of Queens and the shallow marshes of Jamaica Bay, where approximately one-third of residents live below the poverty line. “What I found was a lot of strength, resolve, character and self reflection,” she said.

Dooney, who currently is earning a Masters of Fine Arts in Experimental and Documentary Arts from Duke University, first saw the neighborhood in 2012 while photographing a marching band for The New York Times. She talked to us about the process of taking the portraits and what they add to our national conversation on race.

The first time I was introduced to East New York was probably 2011. … It was this very interesting version of New York. Right away, I was just in love with the sort of rhythms of the place and the people. It felt really warm and people were creative and friendly and then aesthetically, there’s just so many housing projects packed into one area that it’s really visually sort of astounding. You have these row houses interrupted by a giant public housing complex. So visual and just the energy of it, I felt like that was a different version of New York. 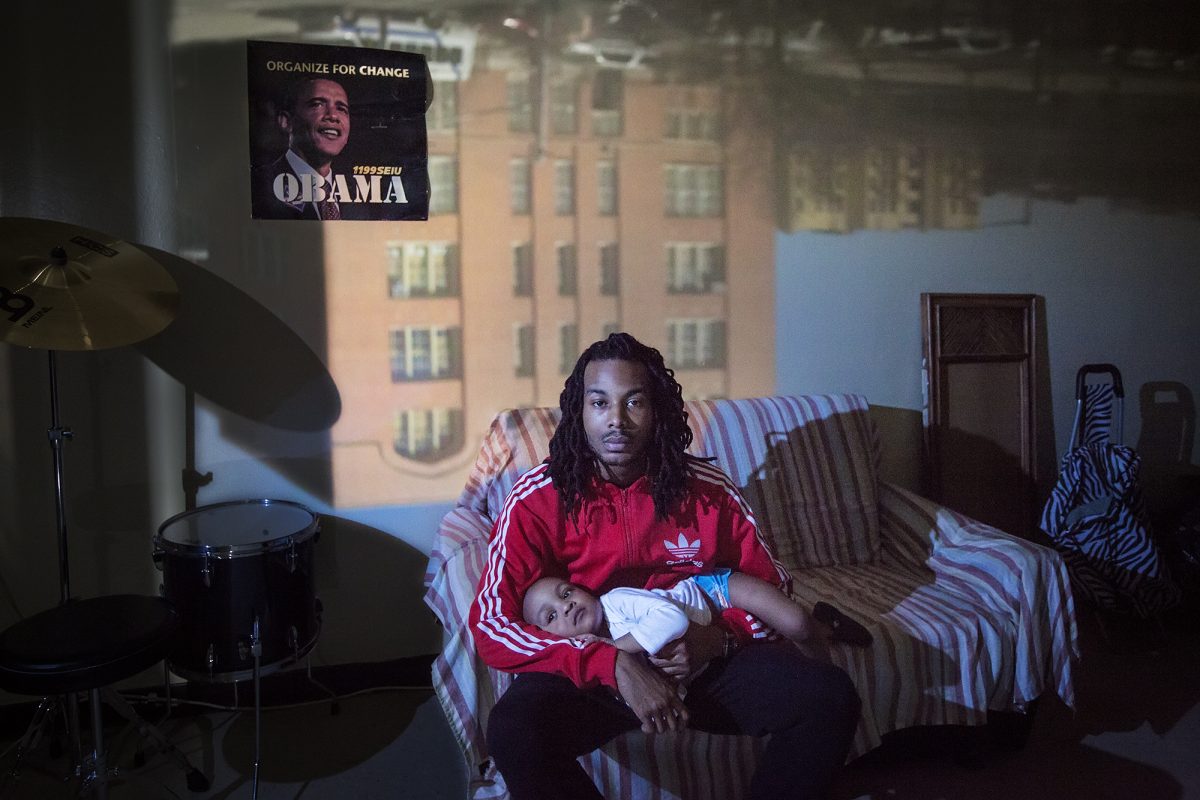 David “Prince” Pierce, 22, poses for a portrait with his son, Prince David Pierce, in East New York, NY on March 29, 2015. “I think about this all the time: who am I doin’ this for? Can I really make this work with his mother or am I just running away from it ’cause I still want to live my life? I don’t want to be tied down. I know a lot of cats that didn’t see 21, didn’t see 25, didn’t see 30.” Photo by Phyllis Dooney

Why was fatherhood your main focus?

I spent a lot of time thinking about the way race is projected in the media, the way it’s talked about, the way it’s visually represented. Especially as there’s more and more attention being brought to it over police shootings and things like that in the last couple of years. I see this gaping hole in terms of representing people of color, especially the black man, as a family member, as a father, as somebody who loves. And I just wanted to see what it felt like to have that discussion.

What’s missing from that conversation?

Now it’s coming more full-circle. You have Black Lives Matter activists that are pointing this out finally, and what implicit bias means, and how pervasive it is, and how we’re responsible as image-makers to not feed into that identification of, “Boy with hoodie is probably carrying drugs.” 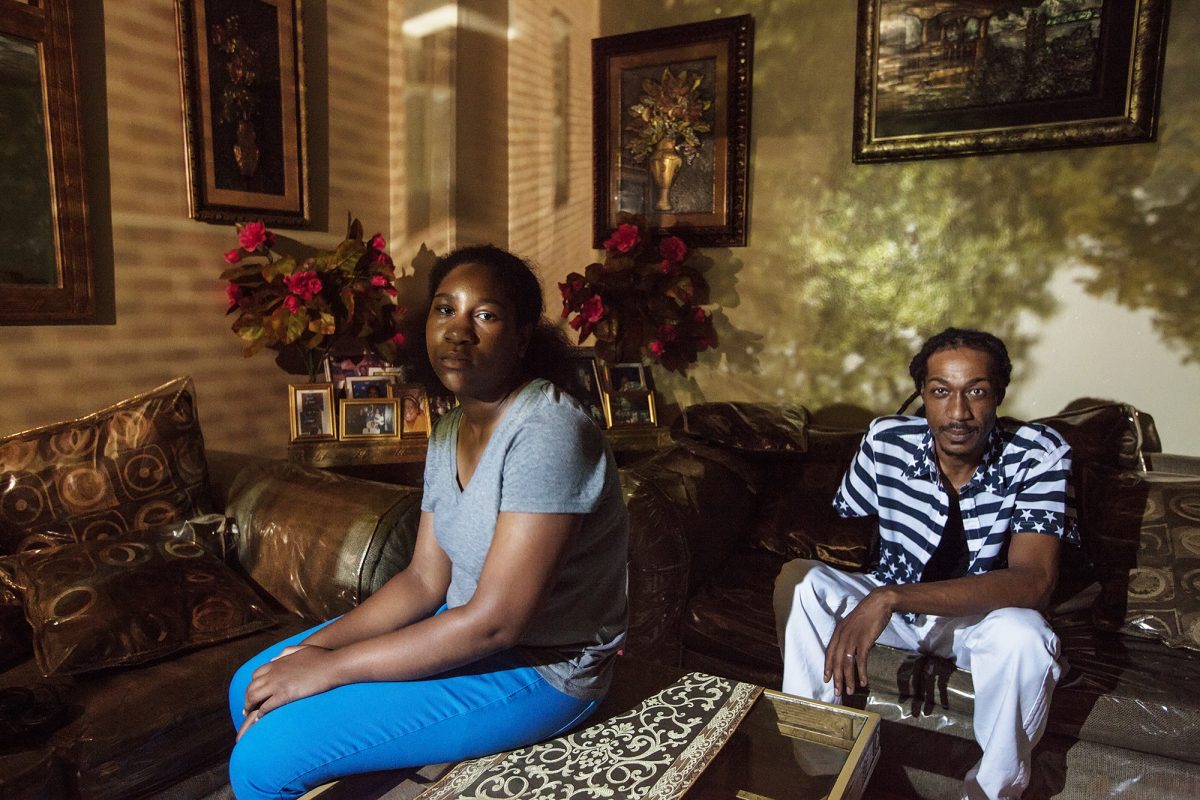 Jason “Law” Woods, 42, poses for a portrait with his daughter, Nevoeh West-Woods, in East New York, NY on July 28, 2015. “The courts do work for men but a lot of men won’t pursue that. ‘Cause it’s been throughout time that you go to court for your child and nine times out of ten, they gonna give it back to the woman. It’s like: why fight?” Photo by Phyllis Dooney

In the photos, camera obscuras project images of the streets into the families’ homes. How did you choose this method?

I had been wrestling with how to do this project for awhile. There were other ideas and ways of attacking it that had been discarded, and when I landed on this it seemed like the right fit, and one of the obvious reasons was that the streets coming into somebody’s domestic space is such a good visual metaphor. What does the outside world do to your private life? How does it shape it? What are the counter-influences that take place? So it was actually visually happening, and that actually enriched the audio conversations, I feel. We were able to see that effect. What are these streets, that are now on your walls, how do you think they’ve shaped your private life as a partner and as a father?

How did you choose your subjects?

I found the subjects through various conduits. Some were people that I knew through working there and doing other stories in East New York. I asked them if they would also be a part of this because they happened to be a father. Other ones were referrals.

They were different from other portraits because it’s so invasive to install a camera in someone’s living room. You’re carrying around sheets of black plastic and taping on the walls and the whole thing is very invasive, and that’s not my normal style of working. But on the flip side, there was an experience to be had. Because when it was successful, there was a shared experience. 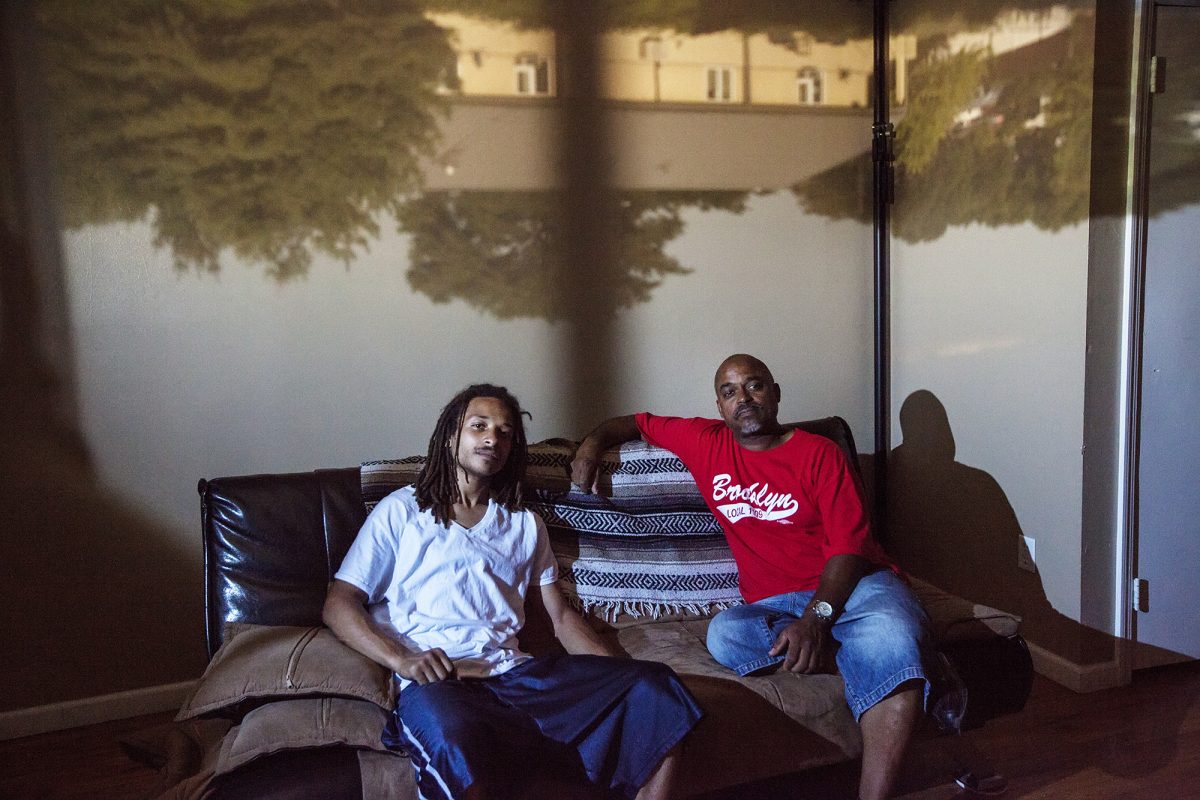 Michael Cathlin, 26, poses for a portrait with his step father, Michael Burke-Andrade, in East New York, NY on July 25, 2015. “Thankfully I walked in [the delivery room] right before my son started crying. So I was there for the whole thing but it was the fact that the mother didn’t want me there.” Photo by Phyllis Dooney

Is there anything else you want people to know about the project?

I think it’s important for people to understand that problems that happened in the past are inter-generational. We hand down our problems to our [descendants] if they’re not resolved in that generation. That idea that mass incarceration or the crack epidemic happened in the 1980s, what that means is, a lot of these men … a good proportion of them grew up without a parent that was victim of that. And that affects how they parent, and it lives in their psyche, and it gets handed down. It shapes how they love. And also with incarceration, if their father has been locked up for most of their childhood, a direct transmission of how to parent, what it means, has not been handed down. These problems are very much something that is manifesting now and will continue to manifest and does shape family life.

It makes me think about social issues and social justice because really what we’re all trying to do on this planet is love, live, laugh and the most important thing for me to look at is, how is our system or our policies affecting your ability to do those things? Which is why I tend to go in and check out how it’s taking shape in families.

You can see more photos from the project below. 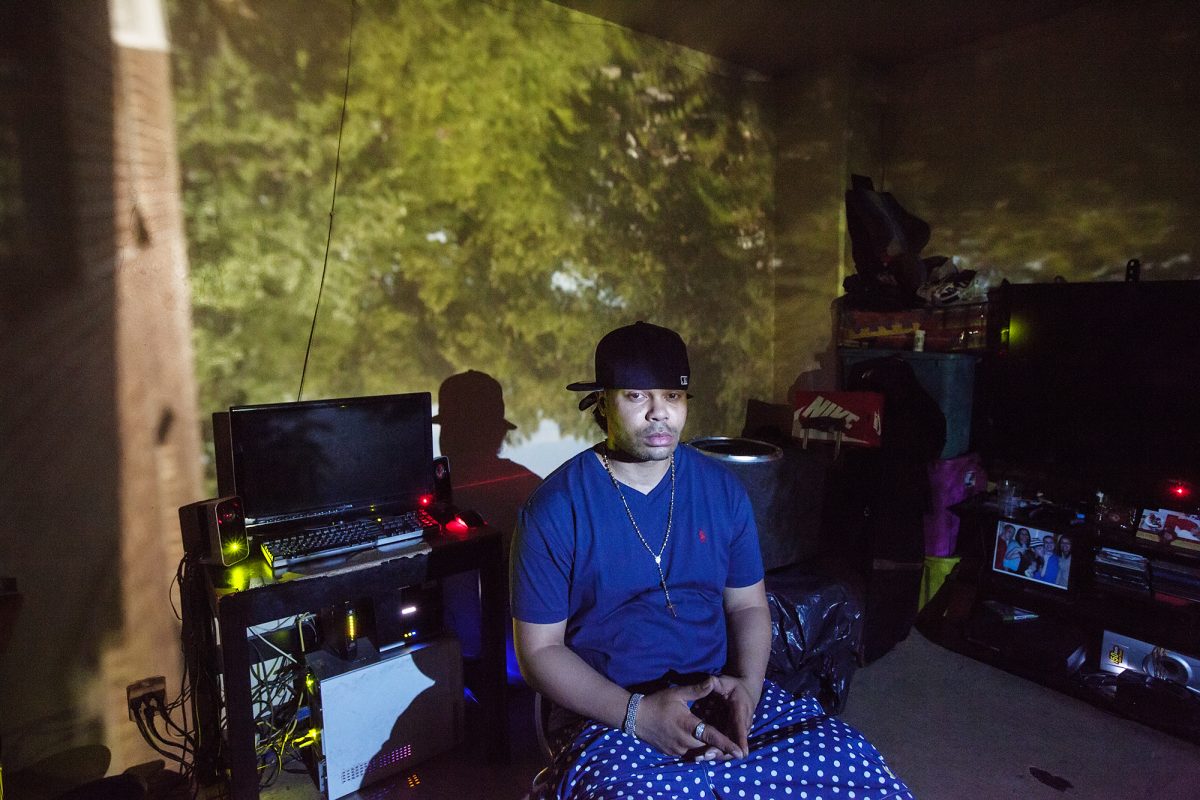 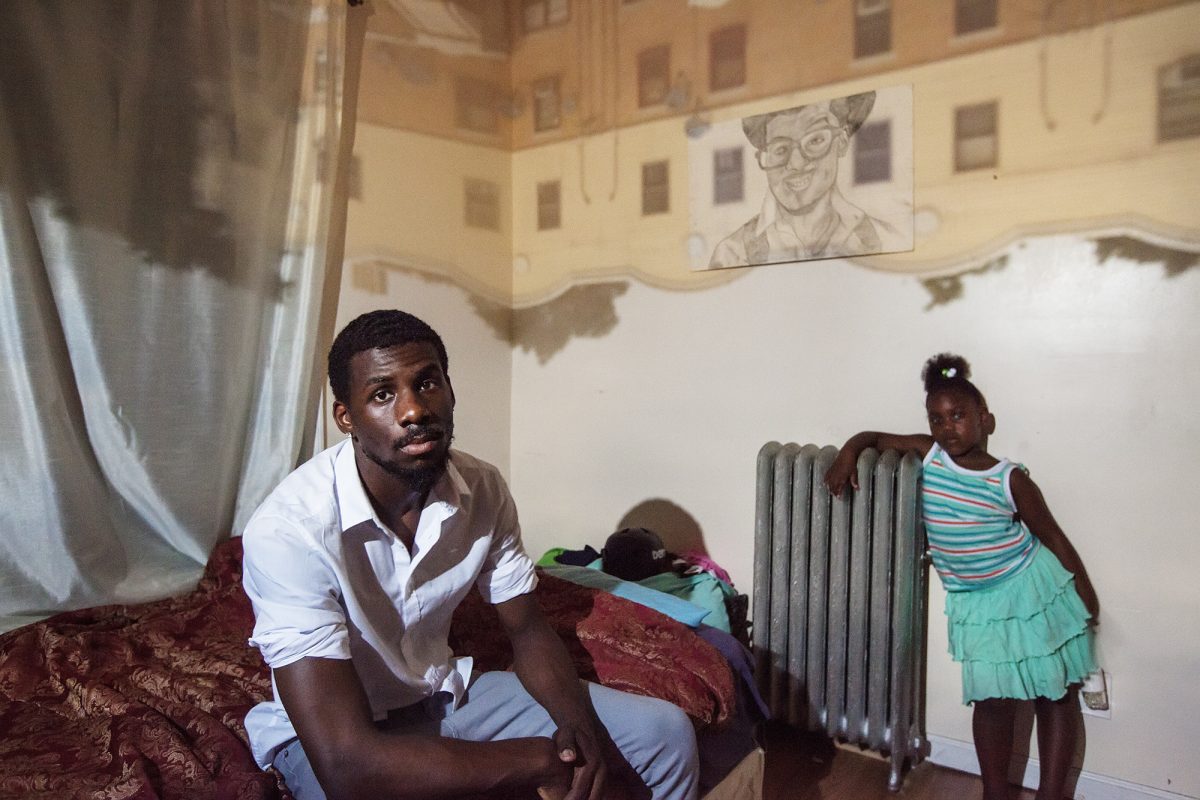 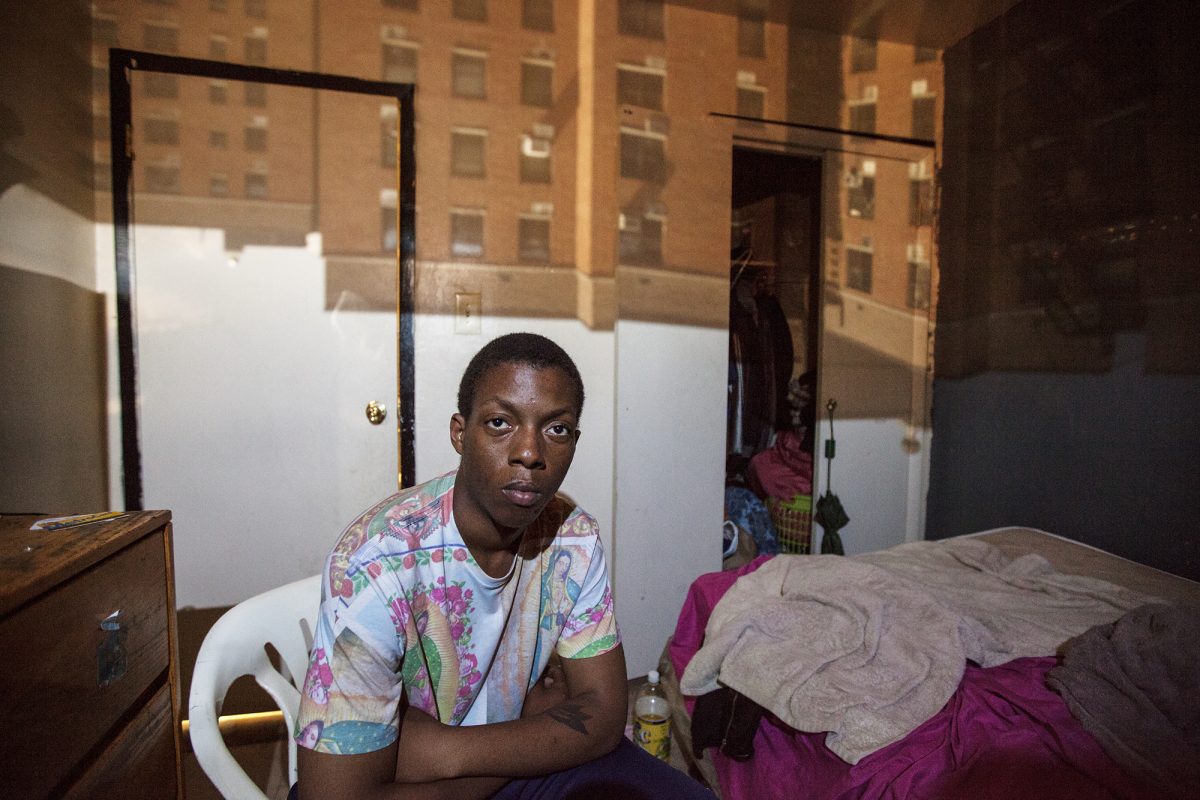 Esau “Chubbs” Johnson, 23, poses for a portrait in East New York, NY on May 30, 2015. “The cops are cracking down on us. You know, they are shooting kids. That’s really what I am worried about: my daughter growing up in that environment.” Photo by Phyllis Dooney 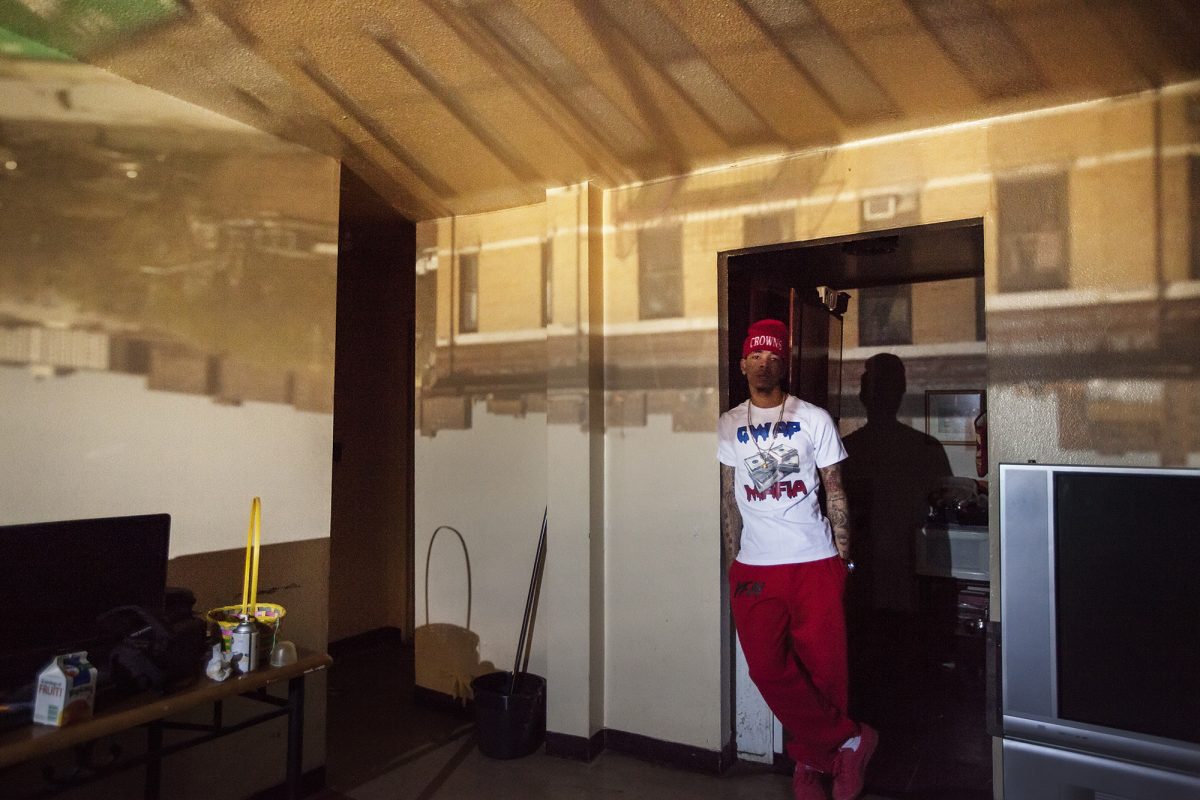 Ramall Thomas, 24, poses for a portrait in East New York, NY on April 19, 2015. “[As a father] you can’t teach a woman to be a woman, but you can show her what it’s like to be loved by a man, what type of man would she want to look into [later on]. Hopefully it would be somebody like her dad.” Photo by Phyllis Dooney 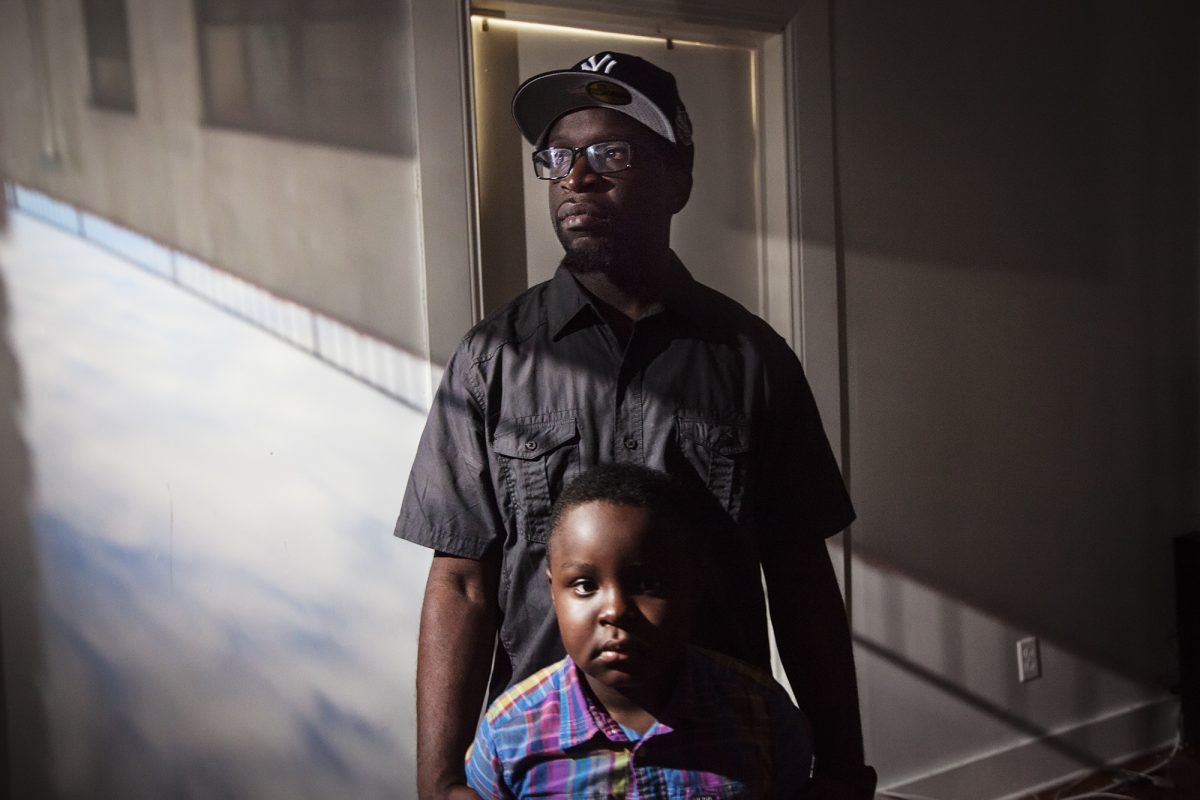 Clifton Jerrick, 35, poses for a portrait with his son, Logan Suttor, in East New York, NY on March 12, 2016. “Being a father is just not a title, it’s a job. It’s a full time job until the day you die.” Photo by Phyllis Dooney 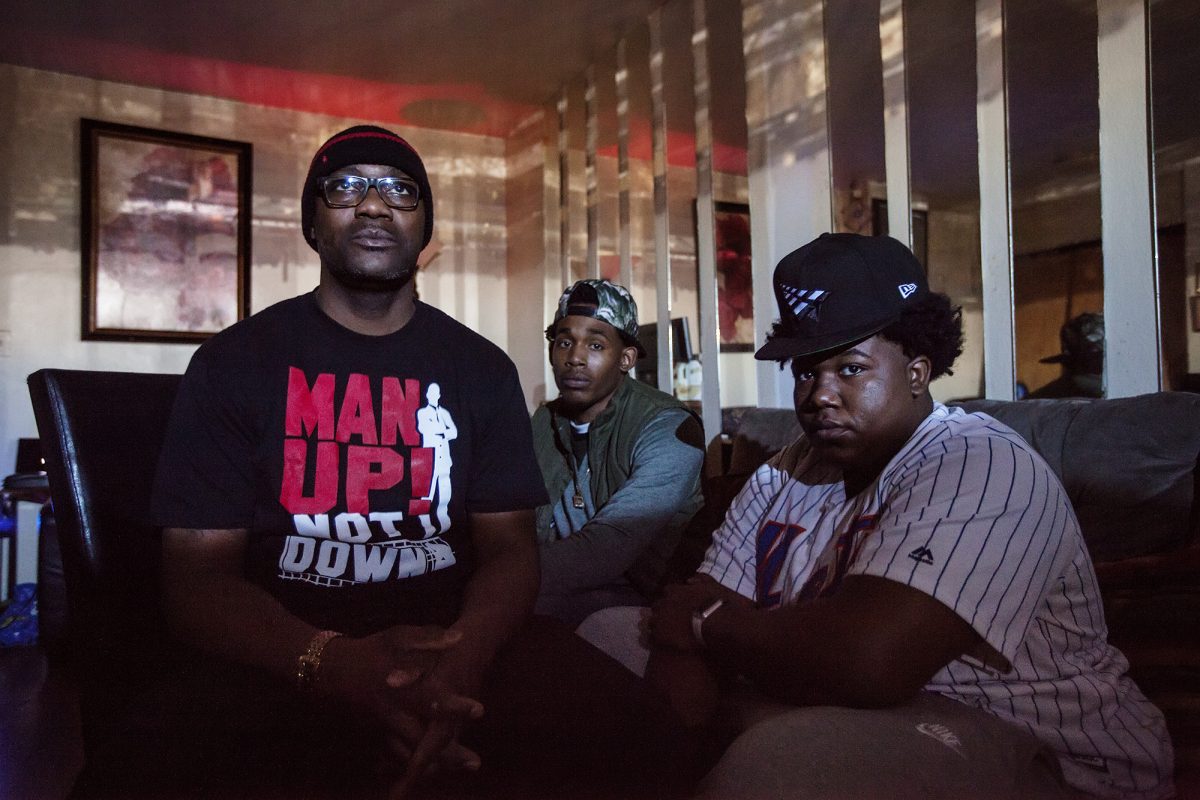 “Brother Kenny” Watson, 49, poses for a portrait with his step children, Sammie Lee Brown Jr. (center) and Justin Grant (right), in East New York, NY on Feb. 7, 2016. “One of the challenges I have is that I am fearful for my son that lives in Atlanta. It’s a hard adjustment. You have a family here but you also have a son who needs you there. How do you split yourself?” Photo by Phyllis Dooney 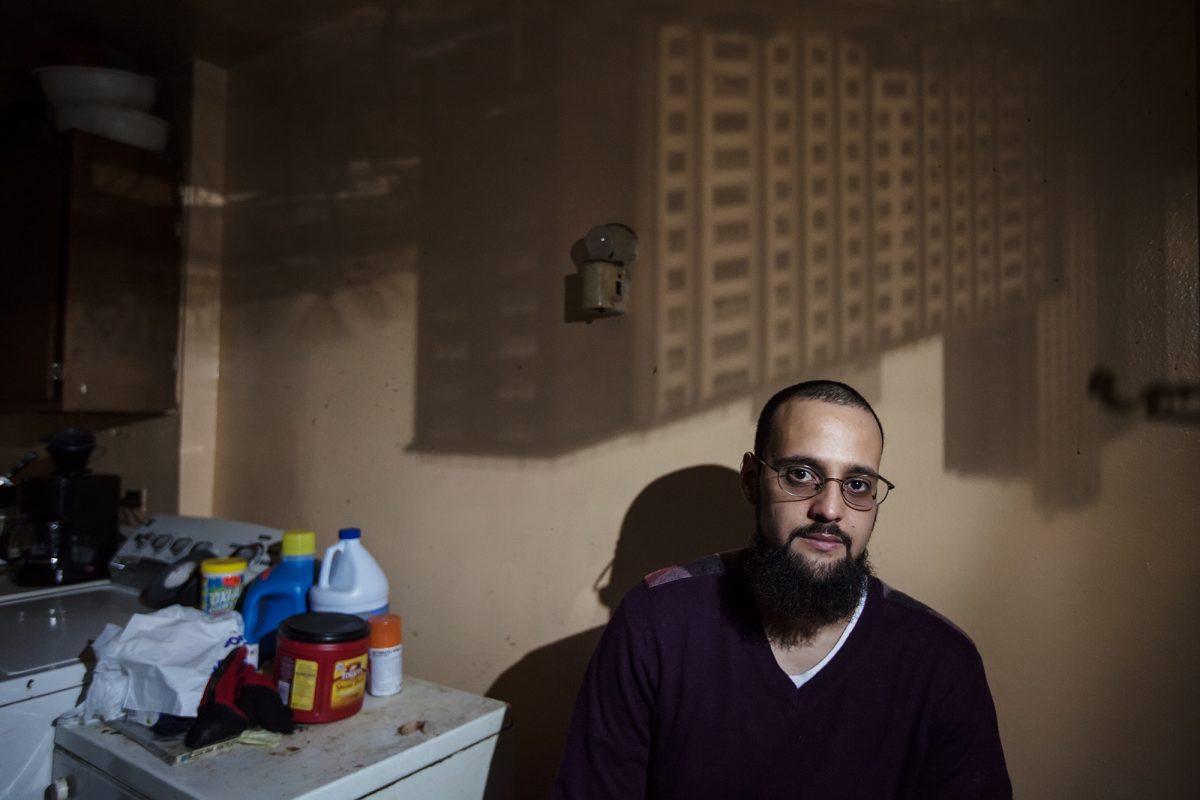 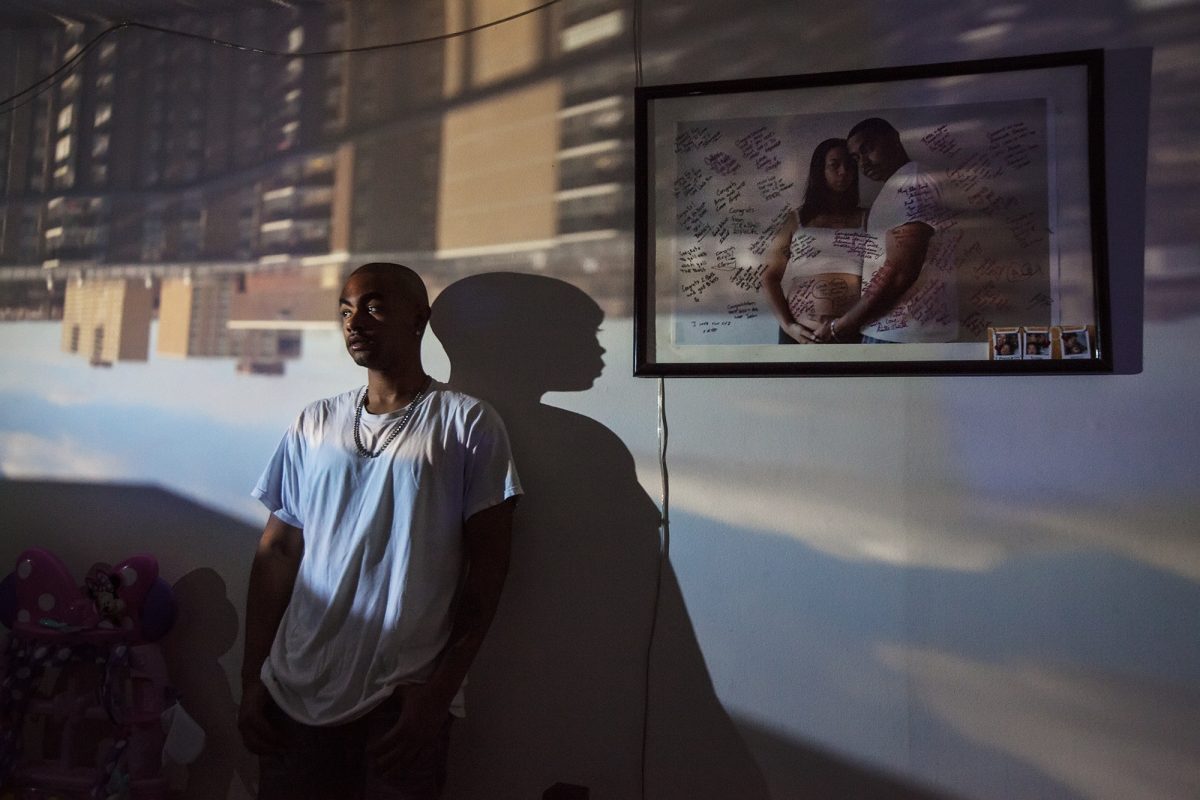 Left: Raheem Grant, 39, poses for a portrait with his daughter, Nature Grant. “When I was growing up I didn’t have a father. My little one, she gets scared of the dark: ‘You don’t have to be scared because Daddy is here.’ Just knowing that I am there for them makes me feel like I accomplished a lot.” Photo by Phyllis Dooney