Strap into your scuba gear — this museum is worth it.

Installation began on Museo Atlantico — the latest project of underwater sculptor James deCaires Taylor — this week, 14 meters underwater in Lanzarote, one of the Spain’s Canary Islands off the coast of West Africa. Taylor, whose creations have spanned the waters from the Bahamas to London, calls it the first underwater contemporary art museum in Europe and the Atlantic Ocean.

The “museum” will consist of several different installations. The first, “The Raft of Lampedusa,” shows a group of people huddled in a raft in an homage to French Romantic painter Théodore Géricault’s painting “The Raft of the Medusa.” The piece references Europe’s current refugee crisis, according to a statement on the project.

“The work is not intended as a tribute or memorial to the many lives lost but as a stark reminder of the collective responsibility of our now global community,” Taylor wrote.

The museum’s main installation, titled “Rubicon,” gathers a collection of 35 people in contemporary clothing who are walking toward a gate — “a point of no return or a portal to another world,” Taylor wrote. The figures appear vacant, unaware of the gate that lies ahead of them, a scene meant to raise awareness of environmental threats to the ocean. At least one pair is taking a selfie.

Taylor uses marine-grade cement with pH-neutral concrete that is nontoxic to local wildlife, and over time the statues increase marine biomass by accumulating coral on their surfaces. Each piece has a foundation plate that can be drilled and anchored to the sea floor. “They’re designed to not move in strong currents or storms, so they have to be very solid,” he told NewsHour.

Then, he works with a team of divers to install them. Taylor provided video of this week’s installation process off the coast of Lanzarote, whose government commissioned and financed the project.

Taylor, who began exploring Malaysia’s coral reefs as a child, has a history of sinking his creations below water. His piece “Viccisitudes” (2006), a collection of sculpted figures clustered in a circle, sits 15 feet below the waves in Molinière Bay, Grenada, West Indies.

In 2009, Taylor, along with Jaime Gonzalez Cano of Mexico’s National Marine Park and Roberto Diaz of the Cancún Nautical Association, launched a project to create what The Guardian called “the only underwater museum in the world.” The Museo Subacuático de Arte is located in the National Marine Park of Punta Cancún, Isla de Mujeres and Punta Nizuc.

The installations, which consist of more than 500 figures in an area of 420 square meters and weigh more than 200 tons total, are meant to help preserve the surrounding barrier reef by helping draw visitor attention in another direction, according to a statement on Taylor’s website. Taylor cast some of the figures with help from locals in the nearby Mexican village of Puerto Morelos. Other artists contributed to the museum, including Roberto Díaz Abraham, Salvador Quiroz Ennis, Rodrigo Quiñones Reyes, Karen Salinas Martínez and Enrique Mireles.

In 2014, when Taylor installed his 40-ton piece “Ocean Atlas” in the Bahamas, it became the world’s largest underwater sculpture to date. In tandem with the Bahamas Reef Environment Educational Foundation, Taylor said the sculpture’s purpose was to draw attention to the effects of climate change and overfishing on the oceans. And last summer, he placed “The Rising Tide,” a sculpture depiction of the four horsemen of the apocalypse, on the banks of London’s Vauxhall Bridge so that it would be visible twice a day during low tide.

Taylor said that he hopes the museum will draw people to explore what’s hidden beneath the Atlantic surface.

The Canary Islands are “surrounded by blue everywhere, but people don’t have a great understanding of what’s actually happening beneath the surface,” he said. “I hope most of the works can be an entrance point, or a portal, where people will get to know what an amazing place the underwater world is, and will hopefully inspire them to protect it.”

“They’re all designed to change and evolve in the ecosystem where they’re placed,” Taylor told NPR. “And sometimes that provides spectacular results. You know, we get sort of pink and purple corals and sponges and fire coral and tunicate — all these amazing things growing on them, morphing them. That only adds to them. They really sort of then become alive.”

You can see more images of the pieces and installation process below. 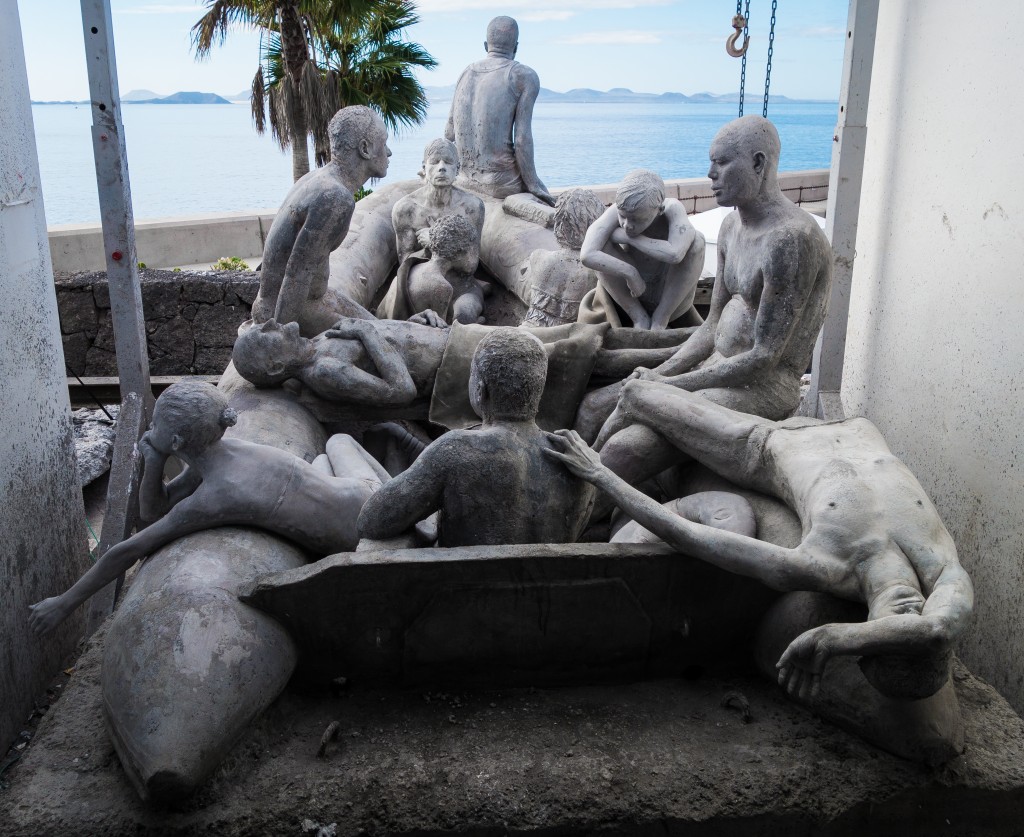 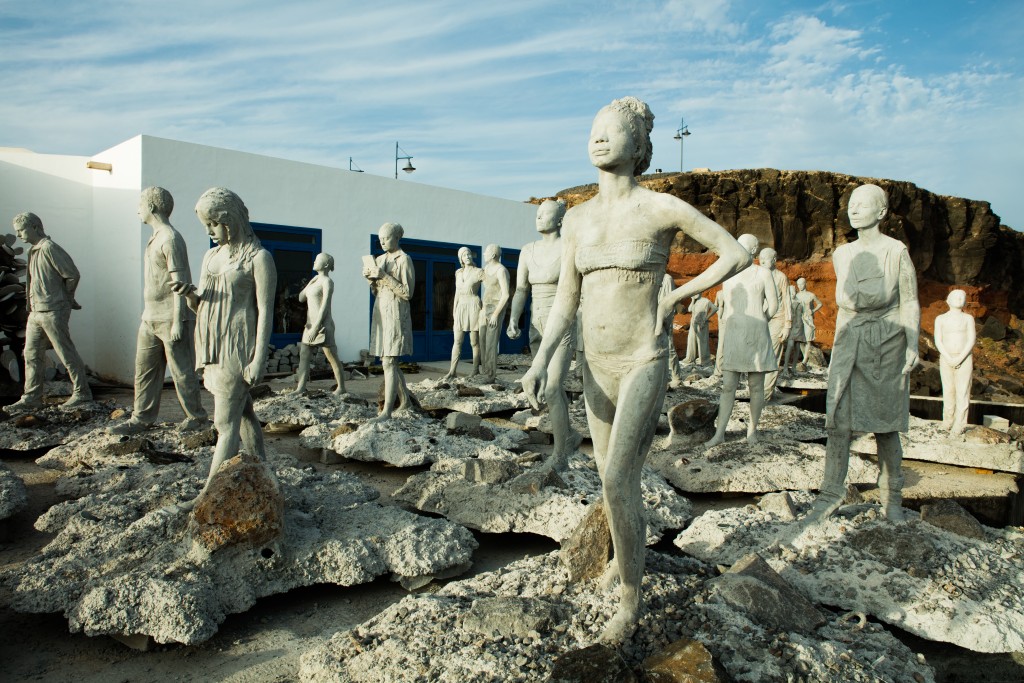 Figures from “Rubicon,” part of Taylor’s underwater sculpture exhibit, wait to be lowered underground off the coast of Lanzarote, Spain. Photo by Jason deCaires Taylor 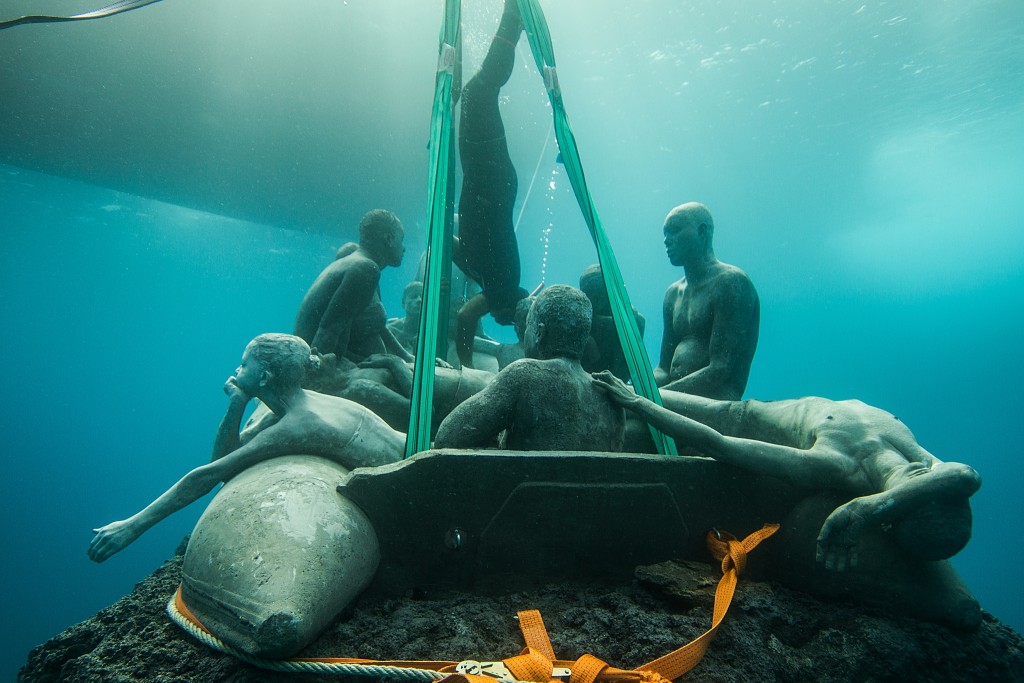 “The Raft of Lampedusa” is lowered to the ocean floor. Photo by Jason deCaires Taylor 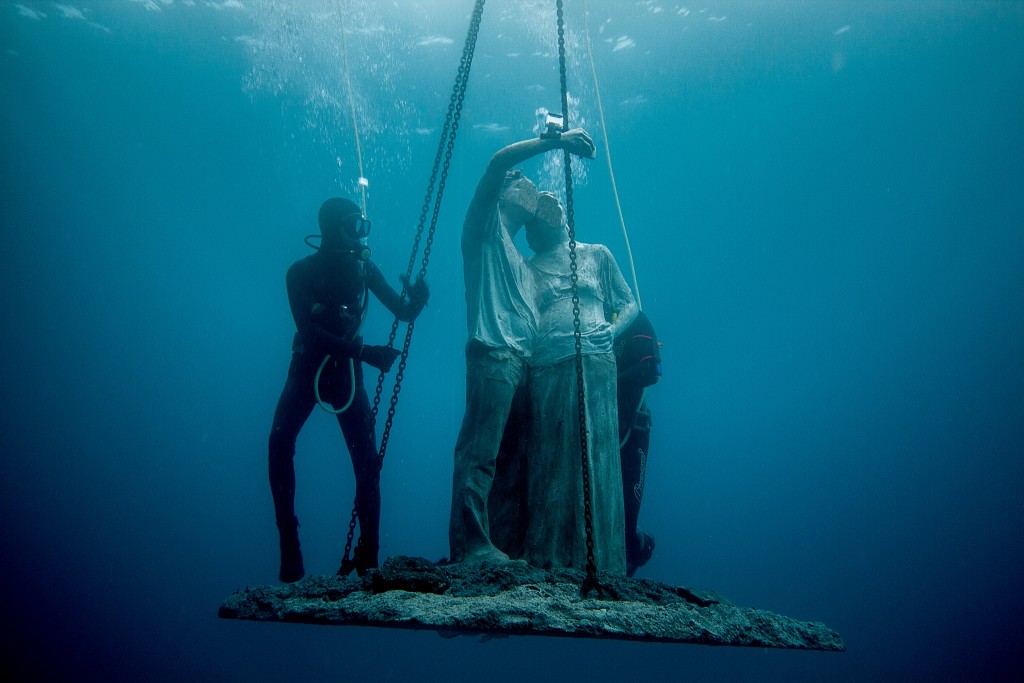 Figures from the “Rubicon” are lowered into the water. Photo by Jason deCaires Taylor 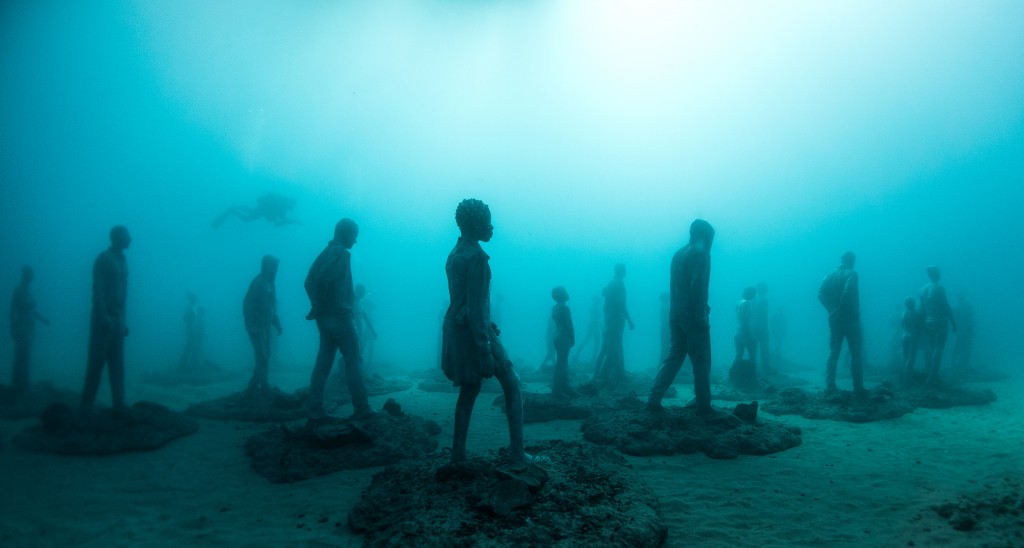 “Rubicon” figures are installed on the ocean floor. Photo by Jason deCaires Taylor 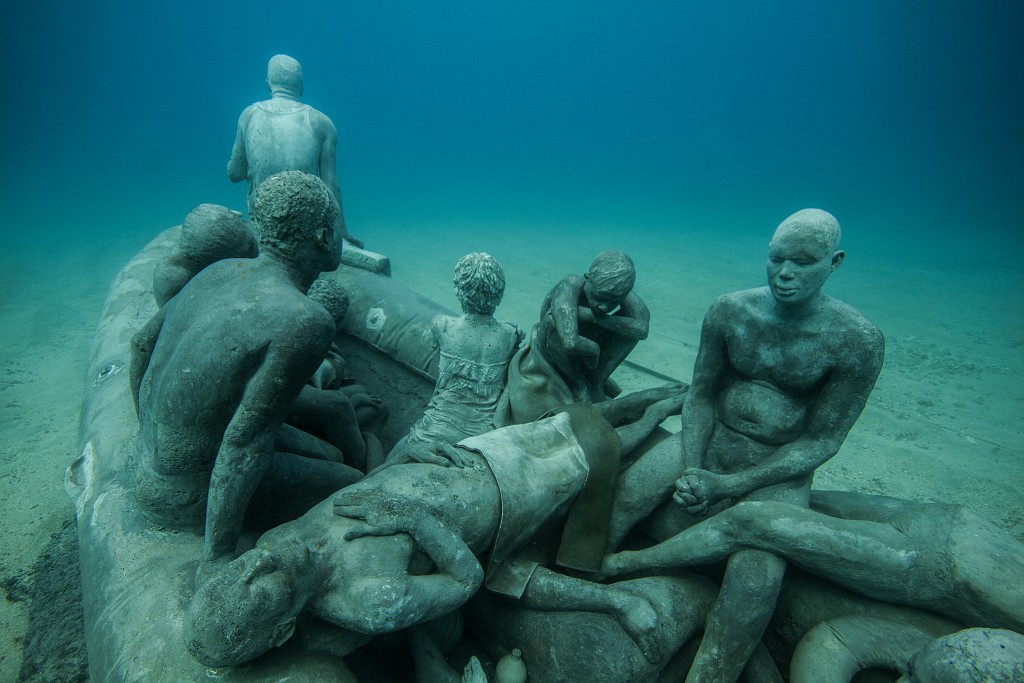 “The Raft of Lampedusa,” a piece Taylor based on Géricault’s “The Raft of the Medusa.” Photo by Jason deCaires Taylor 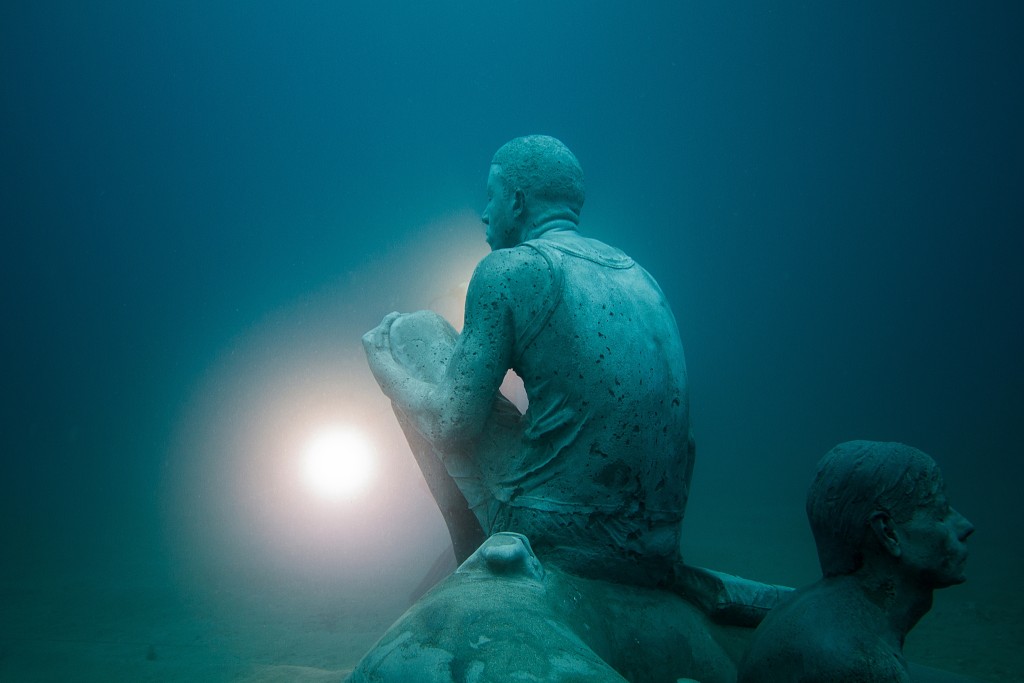 Close-up on a figure from “The Raft of Lampedusa.” Photo by Jason deCaires Taylor 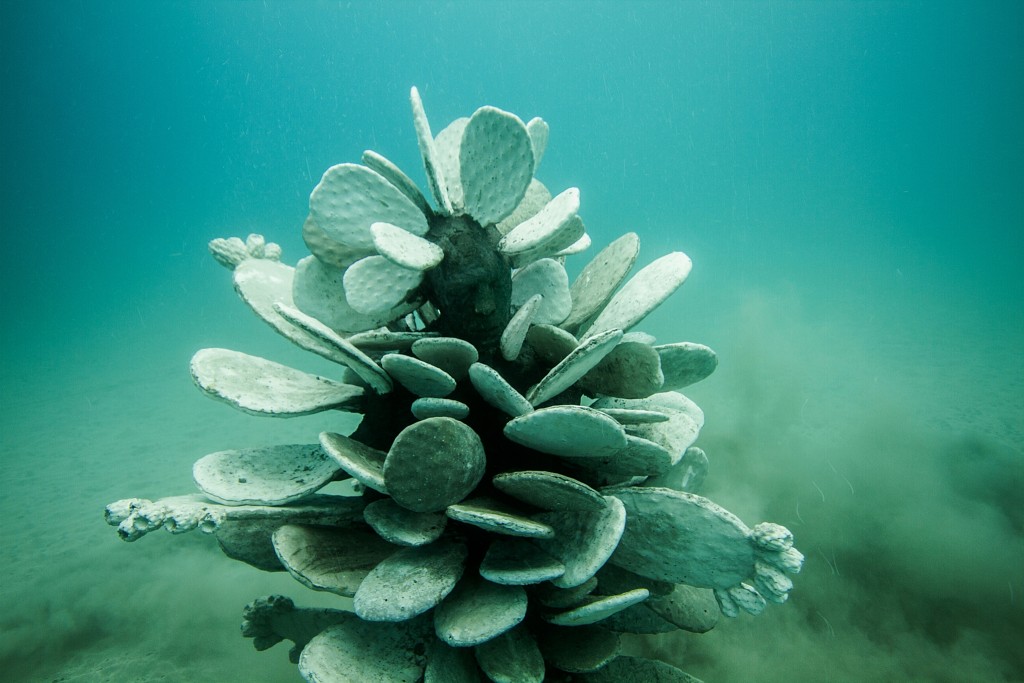 The sculpture of a cactus, a reference to the vegetation in Lanzarote, Spain, appears in the water. Photo by Jason deCaires Taylor